Product: The Sims 4
Platform:PC
Which language are you playing the game in? English
How often does the bug occur? Every time (100%)
What expansions, game packs, and stuff packs do you have installed? All
Steps: How can we find the bug ourselves? Create a room and add some ceiling lights (doesn't matter which). Move sim(s) onto the lot and set the lighting color to neutral (it's yellow by default, so changing it to neutral should remove any odd tinting). Add a set of white stairs (for instance, I used the Sturdy Stairs, white palette selection. Draw a room on the second floor (same size as the one below) so that the structure is fully enclosed and considered an interior space. Place additional white objects (such as Decorative Corbel and Scrollwork Corbel(wall sculptures), As Time Goes By, Uninspiring Window, and Sir Stainsworth's Stained Glass (windows). Place the same objects outdoors and compare the colors (during the daytime - Brindleton Bay is a good color neutral environment to do this).
What happens when the bug occurs? The objects cited above are unnaturally darkened from white to grey. Adding more lighting does not change this.
What do you expect to see? I expect to see white objects (as shown in their palette selections) to appear white whether indoors or outdoors. I understand that there might be some *slight* variation (as there is outside), i.e. not as brightly lit potentially as when the sun is shining on them, although enough lighting in the room should create a similar bright effect (and does with other objects, such as curtains), but there should not be a complete color change such as we currently see.
Have you installed any customization with the game, e.g. Custom Content or Mods? Never used.
Did this issue appear after a specific patch or change you made to your system? No

Here is a screen shot showing the difference in color of the objects listed above when placed within a room vs. the exterior (note that this shot was taken in Brindleton Bay because its exterior lighting is a mostly neutral tint): 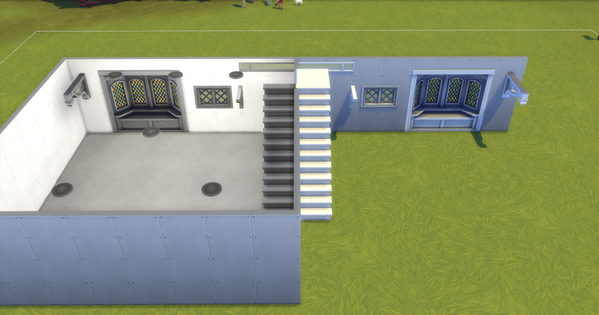 I have the same issue with the freizes (or however they're spelled). I'll put the color as white and one portion of it will be black or brown.

Re: [OPEN] Some white objects appear grey when in a room

Hi, I have found the issue seems to be with the stairwell. As soon as I enclose it upstairs, the shadow happens immediately. If I leave a wall out, the problem is resolved. The problem though then is hiding the missing wall in a not obvious place and disguising it. I think it is worth it to have the light correct. I will continue to play with it in different scenarios to see if this work around fixes the issue. I hope this makes sense. I am not very good at putting my thoughts and actions into words.