Re: Why do my Sims keep getting stuck in the bathroom?

This has also happened to me on three different lots so far:

- the Daisy Hovel in Willow Creek

- the 702 ZenView apartment in San Myshuno (the upstairs bathroom)

- and a custom-built residential lot I created in Sulani

@MonicaMarieV When my Sim gets stuck in a bathroom like this, I just go into Build Mode and replace the door & when I go back to Live mode my Sim is no longer stuck. If it's in a location where it's happened before I use the most inexpensive door possible so as not to be wasting too many Simoleons. Other players are reporting that this seems to prevent the problem from ever occurring again so you might only ever have to do this once.

I don't want to get too far off-topic here because it's for different lots, but I am still seeing this bug in my game. This has happened to me on three different lots so far:

- the Daisy Hovel in Willow Creek

- the 702 ZenView apartment in San Myshuno (the upstairs bathroom)

- and a custom-built residential lot I created in Sulani

The problem is the same as several others have reported in this thread: my Sim enters a bathroom, does various game interactions, and is then trapped in the bathroom due to routing issues/ bugged doors. I use the "go into Build Mode and replace the door" work-around as a temp fix. In my game, it has only ever happened in a bathroom but the types of plumbing fixtures, door types (2-space vs 1-space), and the bathroom layouts were all too different to see any other pattern. It has happened on multiple occasions on each of the lots I listed but not frequent or predictable enough for me to do much in the way of testing. For all of the other lots I have ever played it has never happened at all.

Has there been anything in recent Patch notes mentioning a fix for this issue?

@RandomBuzziness I took a look at Daisy Hovel and 702 ZenView.

About Daisy Hovel, will the routing error disappear if you turn around the bathroom door or if you change it to a 1-space door? Have you made any changes to that bathroom? Otherwise I can't see any reason why there would be any routing problems there. :/

In 702 ZenView there are two upstairs bathrooms. Do you have problem with only one of them or both? Does it matter what the sim does in the bathroom before the routing fail? Is it when they get up/out from the bathtub/shower, get up from the toilet or after using the basin? Maybe the towel hanger (there's one in each bathroom) can be the cause of the routing fail? Normally I think they can "tunnel" through those types of objects, but maybe those can be the cause of the problem since it's similar to the curtain causing the routing fail in the Goth mansion's master bathroom.

Could you add a picture of the room with the routing issue in your custom-built Sulani lot? Preferably a picture from above with the walls up.
Message 63 of 85 (385 Views)
Reply
2
Highlighted

The best way I can describe the problem in all three of these lots is that the bathroom door is suddenly acting like it is locked. If I go into Build Mode and replace the door, or simply save/exit/reload my game, then the problem clears & it might be many game-days before it happens again. I haven't found any one single activity that seems to trigger it on a predictable basis & it doesn't happen frequently enough for any practical testing. I've only listed the lots where this has happened in my game on multiple occasions.

For the Daisy Hovel lot I did replace the 2-space door with a 1-space door (about the same time I read about this work-around in Post #15) but I can't recall if this permanently fixed the problem with that lot. It's been several months since I have played that lot (lol I have added many Expansion Packs since last July!).

For the ZenView lot it is a 3 x 2 bathroom with pretty much the same layout I use for most of the 3 x 2 bathrooms in my game. For a bathroom that small there aren't many options for how to get everything in there. I can't recall having any problems with this layout on any lot other than this one. I can try deleting the robe and reversing the direction of the door. 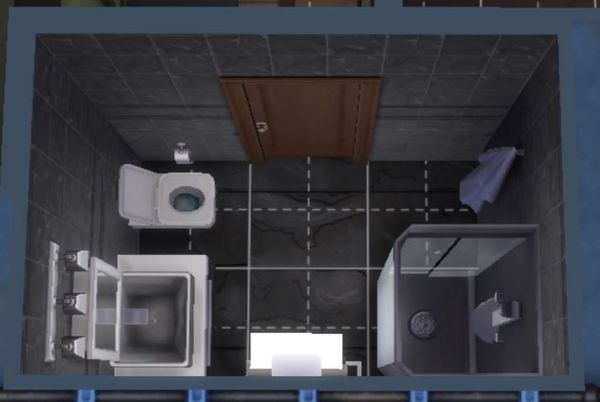 Here is a pic of the Sulani lot. It's happened maybe 4 or 5 times over many days of game-play, so fairly infrequently but not a one-time glitch either. I will try reversing the direction of that door to see if it makes any difference. 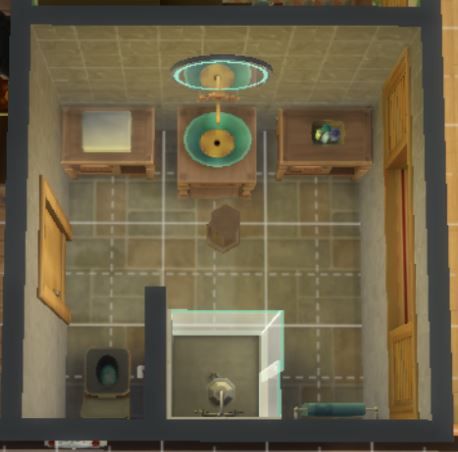 @RandomBuzziness So odd, it really sounds like the doors are the sole problem, but then it’s very odd that it only seems to be in the bathrooms. Maybe doors don’t like to be bathroom doors. 😂

Anyway, maybe you could try removing the hanging towel in the Sulani bathroom, just to make sure it isn’t in the way even though it doesn’t look like it. Only because the Goth mansion had problem with a curtain, so I want to make sure that it’s not a problem with some non-flat wall decorations, or something like that. I’ll take a look in my game too when I have time. 🙂
Message 65 of 85 (330 Views)
Reply
2
Highlighted

To me, it happened at Umbrage Manor and Pebble Burrow lots, and recently at Ophelia Villa, in the small bathroom on the second floor. This is probably not connected with doors, because I had a bathroom in the basement with no doors just stairs to exit, and my Sims were stuck after using the bathroom. This has something to do with the usage of bathroom, after a Sim pees or takes a bath, he/she can't get out. It can be resolved by going to Manage Worlds, or to change Sim's slothes in CAS.

@dirty_milos In the Ophelia Villa the only thing you have to do is to delete the curtains or move the bathtub one step away from the window, then they won't get stuck.

Now I've got the same problem in the toilet on the first floor at Ophelia Villa. I have demolished a part of the wall, and now there is just an open entrance to the toilet. I hope the Goths are ok with that solution.

Product: The Sims 4
Platform:PC
Which language are you playing the game in? English
How often does the bug occur? Every time (100%)
What is your current game version number? 1.62.67.1020
What expansions, game packs, and stuff packs do you have installed? All except for Tiny Living.
Steps: How can we find the bug ourselves? Start a new game, and have the sim use the bathroom. They should be able to go into it once, but then they get stuck there. When you try to leave the bathroom, it says that the sim cannot move and objects are in the way. Alternatively, if you try to go to the bathroom, it will say objects are in the way, even when there are none.
What happens when the bug occurs? Sims complain that there are objects in their way, and they either can't leave or can't go into the bathroom. I've moved all of the bathroom appliances around, and even changed the door to an archway in case it was the door glitching but it still continues. Sims are unable to enter bathroom or unable to leave the bathroom.
What do you expect to see? Your sims constantly peeing themselves or missing work because they're stuck in the bathroom.
Have you installed any customization with the game, e.g. Custom Content or Mods? Not now. I've removed them.
Did this issue appear after a specific patch or change you made to your system? No

Hello, there is a glitch in my sims 4 in which sims either cannot leave the bathroom, or are unable to leave the bathroom. This becomes very annoying very quickly, as they either pee themselves constantly, or they miss work/school. I have tried resetting all of the objects in the bathroom, have reset the sims, and have even changed the door to the bathroom into an archway thinking it was a glitch with that. The archway worked for a fraction of a second, but later on the sims were continuing to pee themselves or getting stuck into the bathroom. I've moved all of the objects around, expanded the bathroom, and have made sure that nothing was in front of the doorway. The sims are able to move around the rest of the house normally, and the bathroom completely normally, it's just getting out and in that's become a continuous problem. It's extremely annoying, and the only way to get them out is to transport them to another part of the house. I have no mods installed.

@casperiann Merged your post with existing thread on this.
Which lot are you playing ?