Product: The Sims 4
Platform:Microsoft XBOX One
Which language are you playing the game in? English
How often does the bug occur? Every time (100%)
What is your current game version number? I do not know how to open cheat console on xbox? Game is up to date
What expansions, game packs, and stuff packs do you have installed? vampires, spa day, get to work, realm of magic, outdoor retreat, cats and dogs, seasons, city living, island living, get famous, jungle adventures, strangerville, parenthood, vintage glamour. I pre ordered university.
Steps: How can we find the bug ourselves? Go to realm of magic and harvest any collectible or plant. The collectibles (frogs, rocks) do not come back and the plants do not grow new harvestables. I notice that in my regularly played areas, plants seem to grow new harvestables and dirt/rocks usually come back, but the frog stations do not produce new frogs anywhere.
What happens when the bug occurs? Nothing. That is the issue. Collecting a frog from a node is a one off event.
What do you expect to see? I expect to see frogs not becoming extinct in the game at least.
Have you installed any customization with the game, e.g. Custom Content or Mods? On console - never used.
Did this issue appear after a specific patch or change you made to your system? Yes
Please describe the patch or change you made. I installed Realm of Magic and pre ordered the University one. After Realm installed frogs have become endangered species in every world I play in.

I think I have described it well enough above, but Will go over again. After I installed Realm of Magic, frogs do not regenerate. No hollow log frogs, no whatever that other thing is supposed to be.  This applies to all worlds that I have checked. I have not checked outdoor retreat or jungle adventure worlds as yet. Frogs are endangered because once you harvest a frog from a log or (?pump?) no more will appear there.  In the magical realm, not only do frogs not regenerate, but rocks/crystals do not reappear, and the plants may only be harvested once. This is an annoying issue, since frogs are required for completing collections, and in some cases, as potion ingredients. I purchased the University expansion as a pre order, and I believe it partially installed yesterday, but this bug was already annoying me for days since I purchased Realm in November.

@belaIV Collectibles usually only re-spawn if you play on the lot for a while. They have a timer that only counts down while you're on the lot.

Do they come back if you play on the lot for a while ?

In the magical realm they do not. Nothing respawns there. Spent two game days  no rocks or logs and the pump only produces one frog. The trees and things over in the garden area only produce one harvestable   In regular worlds, the pump things only produce one frog, then nothing and there are two in my home area. A log respawned so I do not know what was up with that before my first post  I tried a full reinstall last night and it did not help the issue. Then, insult to injury, I discovered my fruits and veggies are vanishing from my inventory whenever I leave the lot  or save  and exit AND if I dare leave the lot without completing a whim I have locked in, I might as well just delete it, because it will never complete, just sits there for all eternity. So disappointing. I certainly hope these are fixed soon as I really was enjoying the game again. Gardening and collecting is an aspect of the game I always go to and lord knows how I am supposed to bring home anything from one of the vacation destinations if everything I own is going to vanish every time I stick my foot out the door.. All this happened after Realm so I think magic broke the game somehow.

I am adding a 'me too' and a comment. I have been noticing instances where collectables are not respawning.
Especially obvious are the logs and pumps for frogs. At first I assumed I had not been in the area long enough.
That is not always the case. For example my current household is in Oasis Springs. They live across from Pebble Burrow which is near several fishing spots and a couple of the frog pumps. They do not travel from the area very often but there have been many days that I check for frogs and get a message "There are no signs of amphibians at this time".

Edit to Add:
Child has option to look for toys at least on the first time I checked. 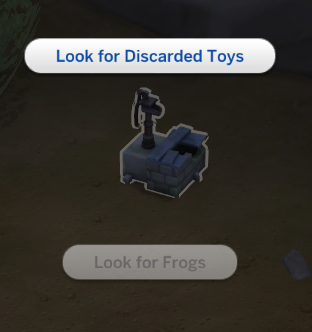 - EQ Avid Sims Player
I do not work for EA
All packs installed and patches are current.
PC / Win 10
Never used CC or mods.

EQ Avid Sims Player
I do not work for EA but I do volunteer at AnswersHQ to help others with their game issues.
EAGameChanger - The Sims 4 Gallery Creator
Gallery Tag: #EQCreations
Message 4 of 14 (829 Views)
Reply
4

Another update. Apparently after I did my uninstall and reinstall, frogs have made a comeback in my regular worlds. Not sure about magical one, as I am more concerned with the gardening bug. I had hoped to post a work around, by putting my flowers in a chest and then storing that in household inventory, but the gardening items vanished from the chest in household inventory. The wand i also stored in the chest remained,  I did also place one excellent rose and one excellent dragon fruit on a table before i left, and they did not vanish.  if that helps at all for anyone trying to fix this. The rose and dragon fruit in my sims inventory and the ones in the chest in household storage vanished.

@belaIV Please keep this thread on the re-spawning of objects. I moved your other post over to the harvestable thread and I see you also have found it on your own.

Bug reports should be one per issue.

I thought that thread was for a pc bug, and I am on xbox.

@belaIV That doesn't matter. Since console is mostly caught up with PC, threads are for all platforms unless they very specifically only occur for one plattform

The harvest issue is an issue on all of them.

is the frog issue solved for you ? Does stuff still not respawn in the magic realm ?

@EuphorialQueenYes I am seeing that "There are no signs of amphibians at this time" in Oasis Springs in my game too, but I was thinking that is just "Sims 4 being Sims 4" (i.e. very buggy lately) until I read your post. My current Sim lives in Willow Creek and she is still finding plenty of frogs there & they always respawn. I do not have RoM though.

No, nothing is respawning in the magical area still. That region is till one and done with all harvestables as far as I can tell. I will try again with a 2 day stay later on when I have time. Have been spending all my play time testing for solutions for the gardening bug, but pretty much accepted that there is nothing I can do on my end at this point. After the uninstall/reinstall everything seems ok in regular neighborhoods as to frogs. Will post an update if I see anything respawn in magical neighborhood.