Thank you. Also I should correct, the photos placed in my household inventory went black, not any in my family members personal inventory!

I’ve also just now tried the trouble shooting method listed and it was not a fix, ;(

Re: Photographs turn black after removal from a wall.

I just had the photos turn black issue as well. Playing University for the first time, had the kid copy a bunch of photos from his parents, moved him into the dorm, had him place his inventory (of his stuff he's collected as a kid, for later use in his new house after graduation) into the ICYA chest. When I took the photos out they were all black.

I made sure I was updated and repaired for good measure.

I have Realm of Magic, Island Living and Discover University.

I've had photos placed in sim inventories, house inventory, and moved them a lot between houses and walls, and never had the issue until I put them into the ICYA chest. I haven't tried other chests.

I won't be trouble shooting further or answering questions as I'm too exhausted and ill, this is just a report to say it happened to me after the latest patch pretty much identical the other ICYA chest reports. 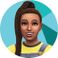 Product: The Sims 4
Platform:PC
Which language are you playing the game in? Polski
How often does the bug occur? Every time (100%)
What is your current game version number? 1.63.134.1020 (64 Bit)
What expansions, game packs, and stuff packs do you have installed? all of them
Steps: How can we find the bug ourselves? Take a photography then put it in chest/box (from Discover University or Eco Lifestyle) after that, travel to another lot then go back to your house. Photos in the chest/box will be black.
What happens when the bug occurs? Photos in chest/box becoming black after traveling to another lot and then returning to house.
What do you expect to see? Photos won't become black after leaving them in chest/box while traveling and returning.
Have you installed any customization with the game, e.g. Custom Content or Mods? Not now. I've removed them.
Did this issue appear after a specific patch or change you made to your system? Neutral/Not Sure

The photos become black after I return from another lot.

@crinrict but this report isn't exactly my problem cause here they become black after putting them from wall to inventory. In my game I could put photos on walls while living in university housing and then put them to inventory and they were fine. (I know that people here have the same problem that I have but it's not the same that the author of this report have that's why I decided to create new theme)
Message 37 of 142 (879 Views)
Reply
0

@maysbat For some it's the chest, for others it was for taking down from wall or even just travelling. It's a more general thread.

@crinrict I get it but for what I have seen only title is general because the first post is about walls and is describing this problem (not general), my problem was mention on page 3, but honestly after how they fix tripod from Moschino Stuff Pack, I don't think they read all of the posts. So in my opinion, we should report bugs in details and not just general, so it should be on a different theme. But I will click Me Too button.
Message 39 of 142 (823 Views)
Reply
1

yes i have mods on but the issue happens with or without them, the photos are fine unless i put them in the box, not sure how to fix this