[OPEN] No Light/Shadow through Glass Roof

[OPEN] No Light/Shadow through Glass Roof

Product: The Sims 4
Platform:Mac
Which language are you playing the game in? English
How often does the bug occur? Often (50% - 99%)
What is your current game version number? 1.55.108.1220
What expansions, game packs, and stuff packs do you have installed? Cats and Dogs, City Living, Get Together, Get Famous, Get to Work, Seasons, Parenthood, Vampires, Laundry Day, Perfect Patio
Steps: How can we find the bug ourselves? Place any roof type on a room or basement (with basement you have to remove the ceiling, it doesn't matter if you remove the ceiling on the room), then apply any glass roof pattern - time of day or weather makes no difference.
What happens when the bug occurs? On a room it doesn't allow any light or shadow, more like a normal non-glass roof texture - this glitch is consistent. On the basement, it causes a glitch where if viewed from the level the glass roof is on the basement below disappear - this glitch appears roughly 50% of the time, it shows more regularly if the there is only one basement with a glass roof.
What do you expect to see? Expect for the glass roofs to allow light into a room and cast shadows, basement should be visible from ground level with the ceiling removed.
Have you installed any customization with the game, e.g. Custom Content or Mods? Not now. I've removed them.
Did this issue appear after a specific patch or change you made to your system? Neutral/Not Sure

The basement bug is temperamental and I reloaded between screenshots so its visible. I think the glitch appeared sometime in the last two months, but I can't say for certain as I haven't been actively playing for a while.

@CalyxSpaceAce Could you post a picture of your ingame graphics settings ?

@crinrict Here's the graphics settings, I have tried turning the graphics up and down to see if it makes any difference but so far no dice. The problem is fairly recent, as only a couple of months ago I could place glass roofs fine. 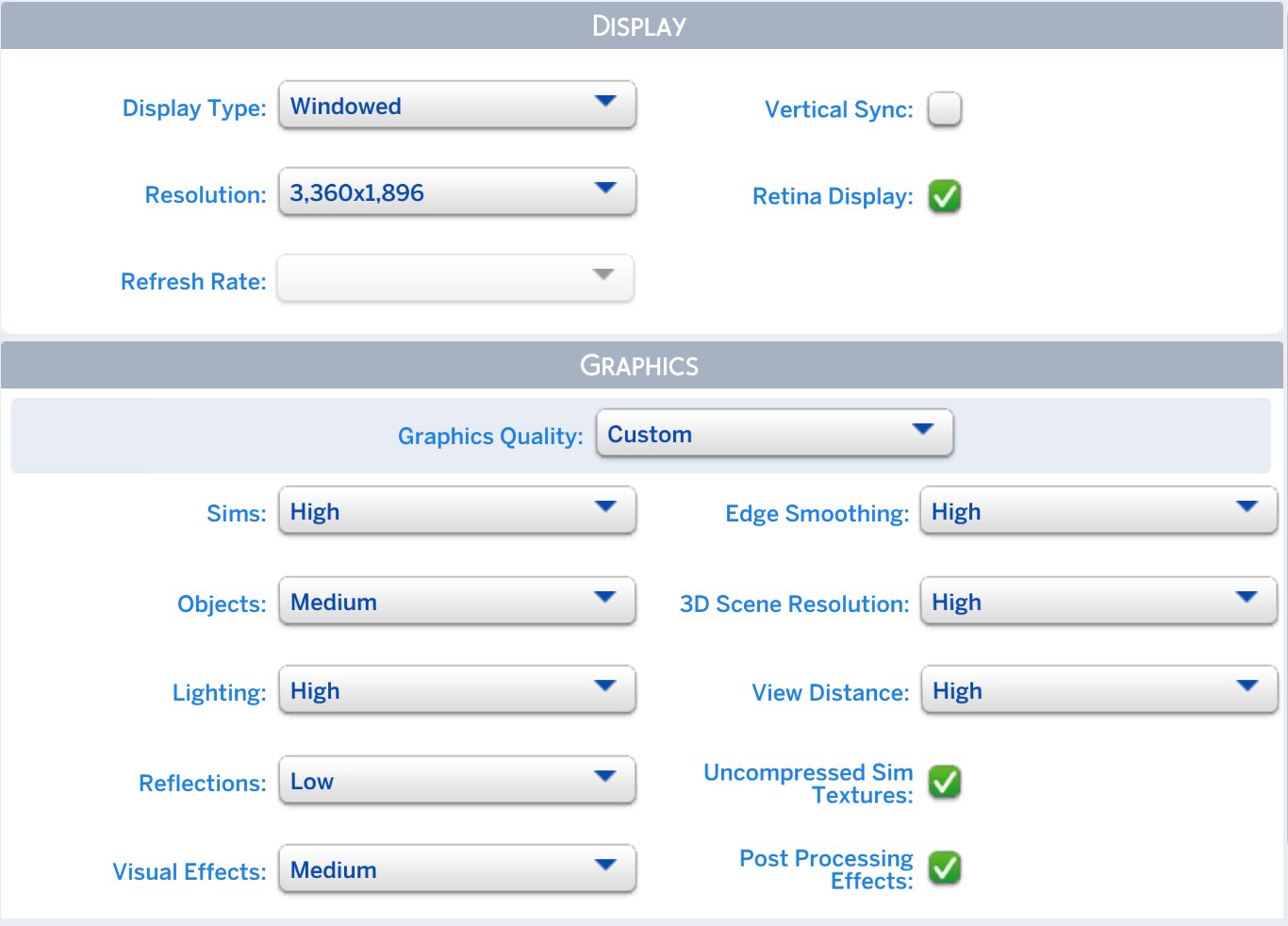 Do you have laptop mode enabled? The setting will be below Post Processing Effects.
- The Sims 3 Mac Forum - | - The Sims 4 Mac Forum -
- Origin Reset Tool for Mac - | - Current broken Mods List -

I don't generally have laptop mode on, but I've tested it with and without laptop mode and it makes no difference. The effect is still the same.

Thanks. Which Mac do you have? If you put all settings, apart from sim settings, on the highest possible does it still happen?

If you move your Sims 4 folder to the desktop and launch a brand new clean game does it still happen?
- The Sims 3 Mac Forum - | - The Sims 4 Mac Forum -
- Origin Reset Tool for Mac - | - Current broken Mods List -

Putting all settings on the highest still creates the same bug, and it still does it if I move my sims 4 folder to the desktop and launch a brand new game (seen below): 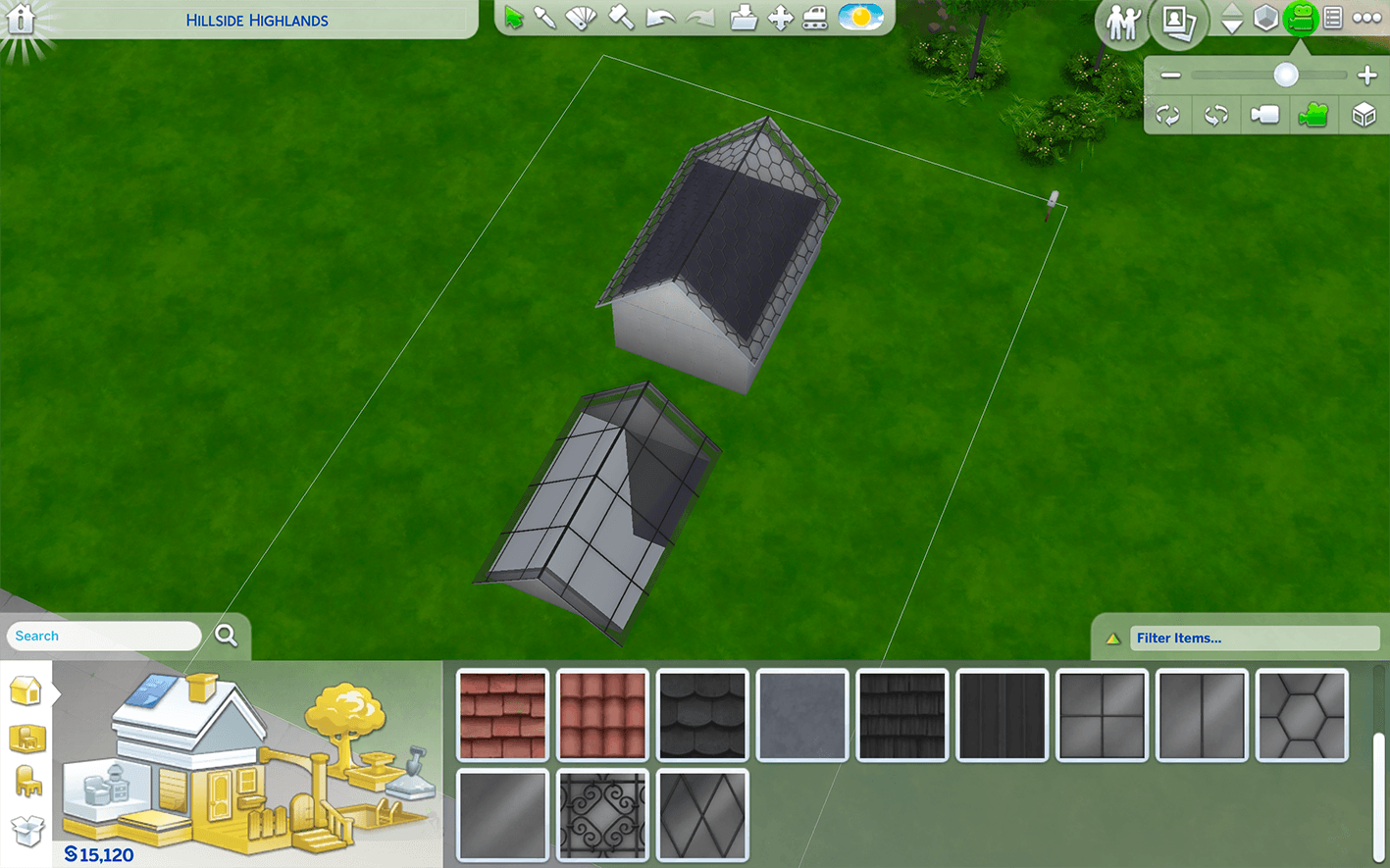 Thanks. We have the same Mac so I should be able to easily replicate this if it is a bug, although I haven't noticed it myself. I'm running Mojave but another helper is running Sierra on the same Mac so maybe she can test it too, could be OS related. Be back after testing

Thank you for the response, I'll keep my fingers crossed and wait!

@CalyxSpaceAce  I'm the person on the same Mac who's still running Sierra, for reasons no one can quite figure out.  (What can I say, I don't like change.)  I spent a bit of time testing, and noticed a few things:

1.  Everything looks normal when a roof is not quite closed, with lighting on high or extra high: 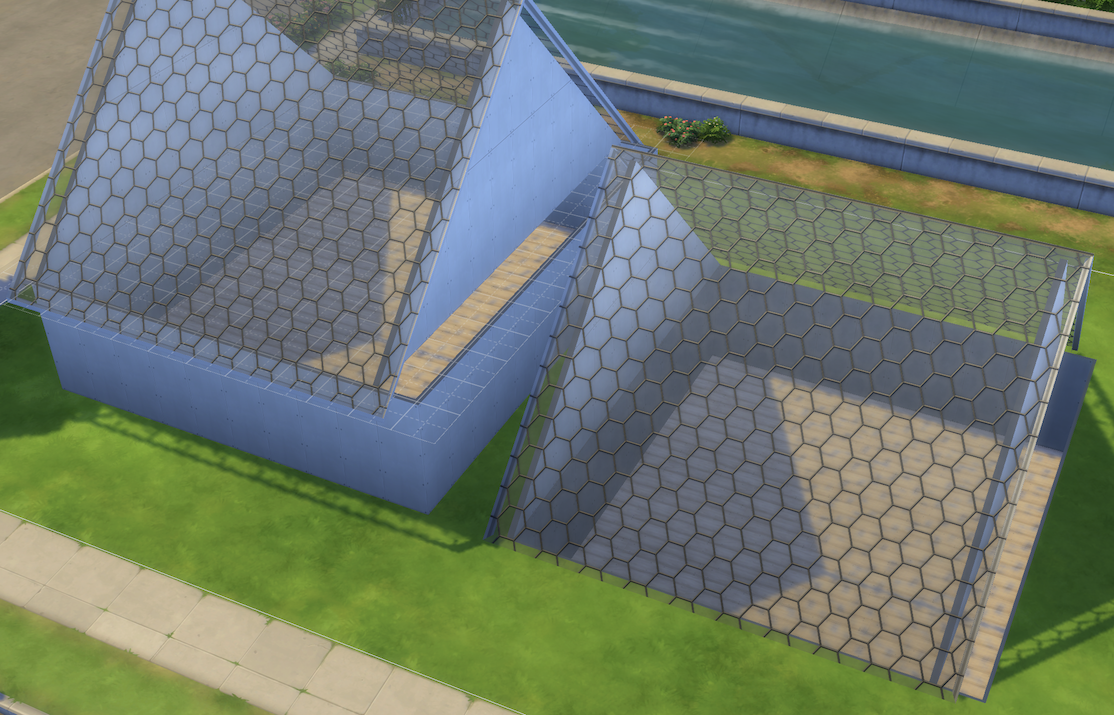 2.  When lighting is on high (the default setting for my laptop) and both roofs cover the entire rooms, neither room is lit, and the basement loses any floor or wall texture: 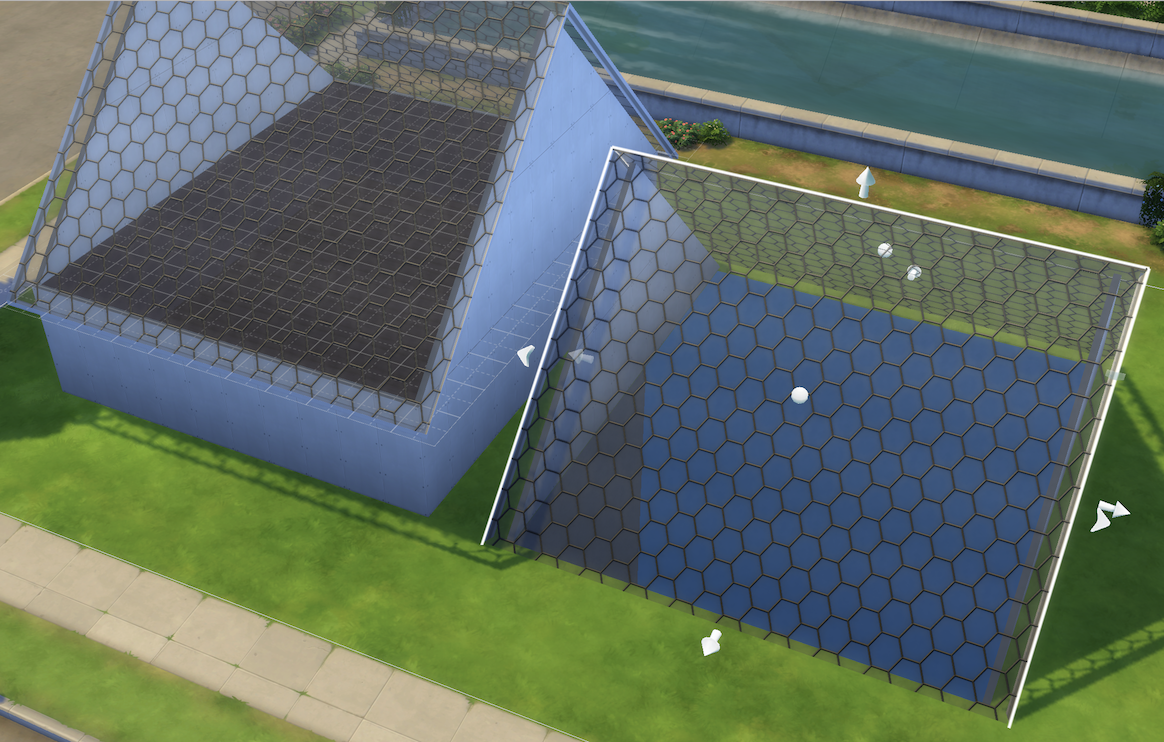 3.  When lighting is on extra high, the surface-level room has proper lighting, but the basement still does not: 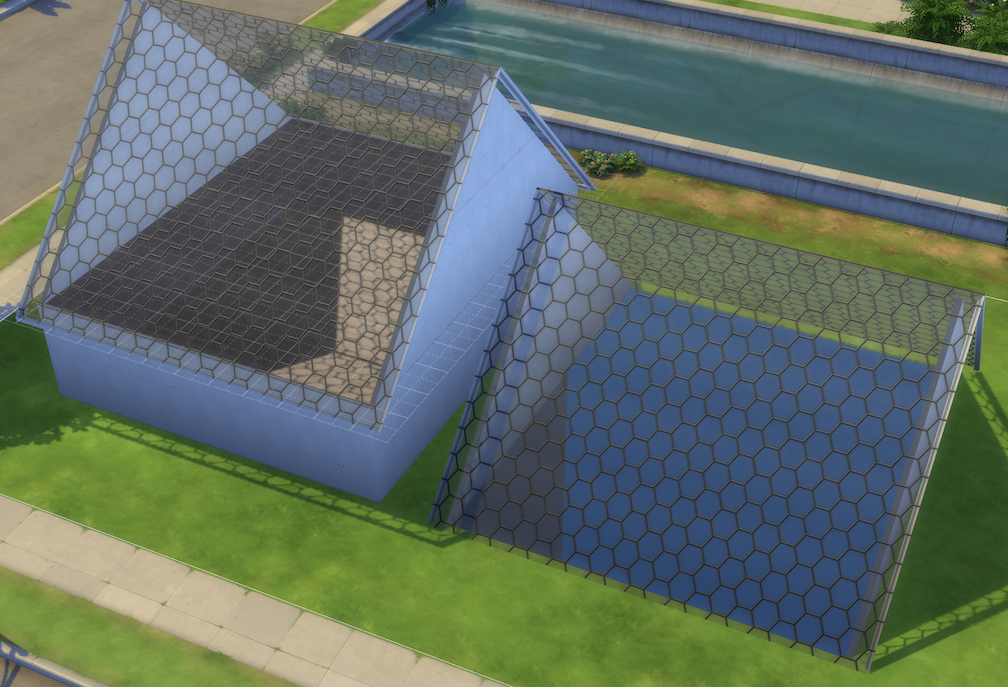 4:  If I place  objects in the basement (lighting extra high), those objects do have the appropriate shadows, separate from the overlay of the roof pattern: 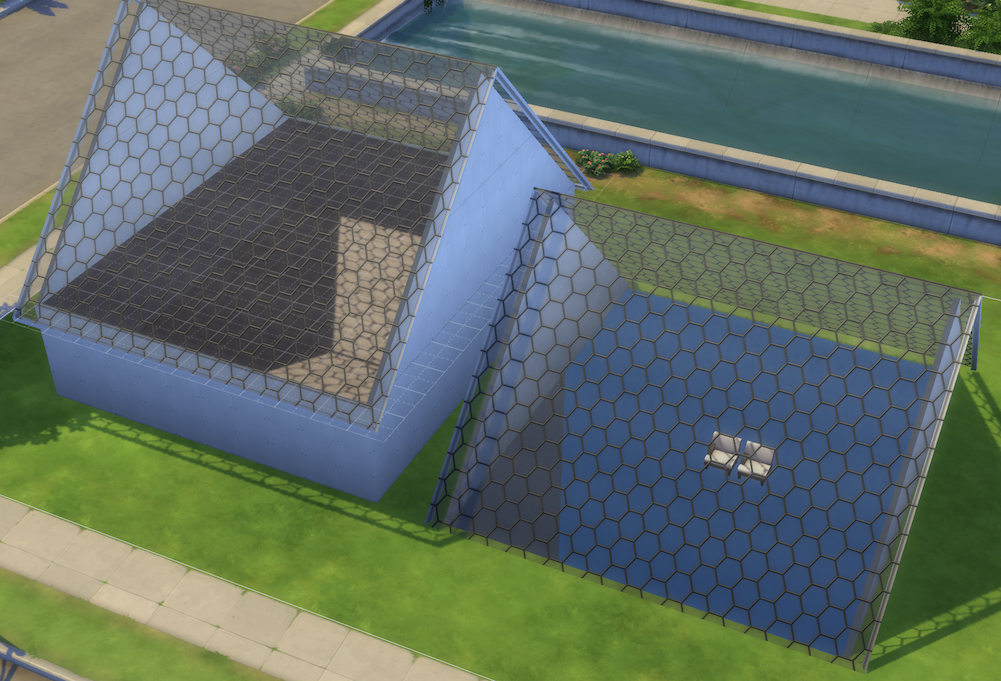 5.  Furthermore, when I made a lot with three separate basements and nothing else (lighting on extra high), the same principles as above applied.  But when I added a small ground-level room, suddenly I could make exactly one of the three basements show correctly on command, even with a closed roof, as long as at least one of the basements was still partly open.  In this screenshot, the middle basement is open, and the other two are closed:

These screenshots are all with afternoon lighting, because the shadows stand out the most then.  The angle of morning lighting means rooms smaller than a certain size aren't lit up at all.  Lowering the pitch of the roof helps some, as does rotating the roof so that the sunlight faces a glass side.  I tried a couple different roofs, different angles, and different patterns, although not all of them, because at some point I was ready to be done; there was no difference.

So I don't know what's going on here, or why, but it's definitely weird, and it seems unlikely to be intentional.