I started a new save with new Sim and her Teen daughter. Only played Sunday, Monday and started playing Tuesday.
Mom went to the GeekCon event while her daughter was at school. When I got the notice her daughter was home from school I used the option to "bring here". She appeared at the festival with only her homework. I know she had her personal diary (Parenthood) and her completed school project plus a packed lunch and Medicine. The items were not in any personal or family inventory.
Mom only had 3 items and all were there.
◇Common factors:
•Packed lunch was in the inventory when the Teen left for school. It was gone and she had the positive moodlet from it. I just started using the packed lunch option. Probably used same option in the other saves with disappearing items.
•Sims were brought to join another Sim using the Bring here option. In this new save that was the only common action.
EQ Avid Sims Player
I do not work for EA but I do volunteer at AnswersHQ to help others with their game issues.
EAGameChanger - The Sims 4 Gallery Creator
Gallery Tag: #EQCreations
Message 11 of 155 (1,488 Views)
Reply
5
Highlighted

Do you play rotationally ?  Does this mean do I play sims on different lots?  If so, no, I only play one family per save (except for a save that I use only for building, but that's a different save file, not this one).  I edited some other lots without the Sim traveling (IOW, from manage worlds) - nothing major though, and no cheats.

If you do, did you have a flea market happening while you were playing another family ?  No.  My Sim did go to the flea market, and bought all the snow globes.  IIRC, that's not when he lost all the other stuff.

What were you doing when you noticed the stuff missing ? After a vacation in GF or S ? Did you travel with your Sim ? No vacations.  The first time I noticed it (when everything but the snow globes disappeared), the Sim had traveled - maybe to GeekCon?  Or to the park in Oasis Springs?  I restored from a previous save and I noticed the elements were missing after he'd gone collecting in the area around his home lot.

Are you playing an kind of active career ?  My Sim is in the Tech Guru career.  His roommate is in Painting.

Which items (type) do go missing ? Only collectibles or other stuff ?  The only stuff he had in his inventory were collectibles, the snow globes he'd bought at the flea market, and plumbing parts.  The first time, everything in his inventory disappeared except the snow globes - so frogs, crystals, elements, plumbing parts, fruits, all of it.  The second time, the elements disappeared for sure, and I think some other collectibles too.

Like EuphorialQueen, I have used the Bring Here option, but I think that was after the problem started.  The lot traits are Fast Internet, Home Studio and Haunted - does the Haunted lot trait cause stuff to disappear?  I have the save files if that helps.

Thanks for all the info.

Tagging this as needs input for now. Maybe someone can find any kind of pattern on when and how it happens.

Questions though (for everyone posting here)

Here are the answers for my first save that had issues.

I did end up recovering at a previous stage in the save and he had all his items then so I just played through again.  I just went into the save and his inventory appears full. FYI all three sims have a lot in their inventory because they've been digging at a lot of dig sites, plus I keep plants in their inventories for them to eat. make sure the items didn't disappear after saving.

Here are my answers for my second save that I noticed issues with:

FYI, I think I've noticed skill books, and in particular the vampire lore book, going missing in other saves, but I play a lot of saves so always chalked it up to my bad memory. I currently play with no mods/cc, though have used MCC in the past.  I clear my game cache regularly (pretty much every time I play).  I also repair fairly frequently, but will try doing that again. My game is current with updates and I have all the packs. I play on Windows 10.

Just as an update, I noticed in the second case I mentioned above that the sim put the book in the 'Ornate Beauty' which happened to be close to the bookcase. I didn't see all the books I thought I lost, but some were in there. So at least part of the issue with the books may be that they are putting them away in the wrong place. I did go into the save that had a lot of missing items in the scientist sim's inventory and I didn't see the missing items I remembered being there in their Storage Chest (though they had one of the storage chests from JA, not the base game ones).

So excited to hear about and soon experience #TS4Seasons
But sadly I must say this happened again just now in my game. Have been playing a single Sim (Oldwin Quince) household aiming for the Rosebud achievement. Keeping him young using many Youth Potions. He completed the archeology aspiration and met and married his soulmate a couple of Sim weeks ago. Roscoe (his husband) was already in the Science career. Everything was good until just now. Followed Roscoe to work (Science career level 9). I had done this before without any problems. One of the tasks was to "Clone self". At the last few minutes of the shift I decided to go for it and Ivan /Roscoe's clone was born. All was well until the shift ended and they got home. Roscoe's inventory was intact complete with upgraded science objects. Oldwin only had 2 Machete left in his inventory. The plants, fossils, guitar, violin and music other things including adventure gear and relics are gone.

Edit: I was able to restore an earlier version of the save to see what went missing. 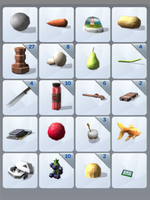 EQ Avid Sims Player
I do not work for EA but I do volunteer at AnswersHQ to help others with their game issues.
EAGameChanger - The Sims 4 Gallery Creator
Gallery Tag: #EQCreations
Message 16 of 155 (1,274 Views)
Reply
2
Highlighted

@SimGuruIcarus Yes I will be glad to send the file.
EQ Avid Sims Player
I do not work for EA but I do volunteer at AnswersHQ to help others with their game issues.
EAGameChanger - The Sims 4 Gallery Creator
Gallery Tag: #EQCreations
Message 18 of 155 (1,237 Views)
Reply
0
Highlighted

Link to save folder includes text file and last exception files. Thank you for reviewing this issue.
*There is more than one save please see the one dated 11June2018
Google Drive Link

EQ Avid Sims Player
I do not work for EA but I do volunteer at AnswersHQ to help others with their game issues.
EAGameChanger - The Sims 4 Gallery Creator
Gallery Tag: #EQCreations
Message 19 of 155 (1,224 Views)
Reply
0
Highlighted

I have experienced this issue as well, and to be honest I'm quite upset about it at the moment. Previously, only things like Plasma packs, homework and upgrade parts have disappeared. Which is completely annoying, but replacable. Today, I also lost some Death Flowers and masterpiece paintings. Which I'm absolutely not happy about. One sims inventory was wiped clean. He had the most items, including a bunch of paintings. I got so mad I quit without saving.

I really see no other alternative than to take my sims off their jobs, and never travel anywhere until this is fixed. I've had this issue for a while, in different saves, but never had a sims inventory cleaned out like this. Really upsetting.