Product: The Sims 4
Platform:PC
Which language are you playing the game in? English
How often does the bug occur? Occasionally (10% - 49%)
What is your current game version number? 1.56.52.1020
What expansions, game packs, and stuff packs do you have installed? All of them
Steps: How can we find the bug ourselves? It occurs pretty randomly, so isn't easy to reproduce. Basically, have Sims go swimming in Sulani and sometimes some yet to be determined event will cause some Sims to get a repeated "Sudden Chill (From Swimming) moodlet that reoccurs whether they have been in the water recently or not. It is different from the "Chilled" moodlet you get with Seasons when the weather is cold.
What happens when the bug occurs? Sims who are not swimming will get the moodlet and turn blue for a length of time, sometimes it will remain until you have the Sim do something to warm up like take a shower or Warm Self at a fireplace. This bug will also occur with a game free of mods or custom content.
What do you expect to see? This moodlet to not occur when Sims are not/have not been swimming recently.
Have you installed any customization with the game, e.g. Custom Content or Mods? Yes
Did this issue appear after a specific patch or change you made to your system? Yes
Please describe the patch or change you made. Release of Island Living

Sims should no longer get the Sudden Chill moodlet after drinking several Kava beverages.

I'm skeptical lol... because my Sim who had this problem had never even had Kava in her life. The issue did go away on its own after awhile though, before this update.

I should also mention that I have not actually seen this issue occur myself since the  1.56.52 update, but I only ever had one Sim affected by it and it had went away for her after awhile on its own prior to the update (at least as far as I know, haven't played that Sim much lately). I became the thread starter by default after the moderators split the topic from the original bug report.

I compared old and new version and it seems they added a wading check to the moodlet trigger. No Kava involved.

"Sims should no longer get the Sudden Chill moodlet after drinking several Kava beverages."

And what about alllll the other instances where sims have never even touched kava? The issue is not resolved. And, there is a continuing issue with updated patches breaking even more things for people.

@InfiniteVerve Are you saying that it's still happening in your game or are you just going by the patch notes ?

As @kusurusu pointed out, they seemed to have fixed more than just the Kava party.

It’s still happening to me also. This started before I even got Island Living, but after its patch. It only happens to a one sim in the household, so could it be something in her inventory (it’s big), or a trait?

On closer inspection it might not be fixed at all. This is what they added to swimmingReactions_Mixers_SuddenChill_Wading (which triggers the visible moodlet)

Here's what we're currently at:

What do you think?

My Sim never had the "sudden chill" moodlet until I took him to Sulani to swim (his actual house is in Windenburg) and now he is getting the moodlet every 3-4 sim hours. He turns blue and almost freezes to death in the middle of summer. He has NEVER drank kava. It's definitely a glitch from swimming. I tried to take him back to Sulani to go back in the water and it still didn't fix it.

I am super irritated because I have played this save through over 11 generations with little to no issues.

This was also reported here: https://answers.ea.com/t5/Bug-Reports/FIXED-IL-Sudden-Chill-But-Not-From-Swimming/m-p/7980921#M94955 in #16 post of that thread.
On the gallery as Lance Mastered Skills under my ID EuphorialQueen #HiddenGalleryTreasures about three months ago.
I added him to a household in game today. He has not been swimming, or wading or anywhere near Kava.
Could there be some sort hidden trait to make him more susceptible to this? 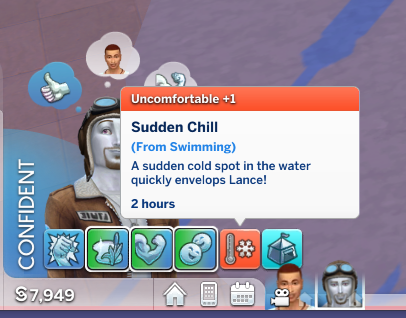 EQ Avid Sims Player
I do not work for EA but I do volunteer at AnswersHQ to help others with their game issues.
EAGameChanger - The Sims 4 Gallery Creator
Gallery Tag: #EQCreations
Message 8 of 22 (976 Views)
Reply
4

@crinrictstill happening randomly. I noticed it in a new save- after the family had gone to Selvadorada (one sim only had the moodlet). Upon returning home (Willow Creek), the sim family had a visitor at their door who was blue (exactly like the sudden chill), but that sim changed back to normal skin colour after a period of time (just as they do with the sudden chill event).

And no one drank Kava (my sims never drink).

@ShinobuTypeError Could you fill out the form for me for this new thread ?