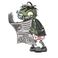 @supercutefuzzyThey have to eat two mermaidic kelps in a row to get rid of the mermaid trait.

I'm watching these threads with interest because, knowing about this issue because my friend's main couple is a mermaid/spellcaster couple, I intentionally waited until my mermaid was pregnant before giving the father the Rite of Ascension.  The baby is still a child, but CAS says she's a spellcaster, as does her little motive icon.  I'll be watching her carefully when she ages up to teen!

My mermaid half breeds will get stuck with their mermaid form and swim all the time through the floors too.  Sometimes their bottom half is invisible.  Cant change outfit because only swimwear is a choice 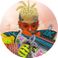 Product: The Sims 4
Platform:Microsoft XBOX One
Which language are you playing the game in? English
How often does the bug occur? Every time (100%)
What is your current game version number? EP:1.assets.live-ep05.121
What expansions, game packs, and stuff packs do you have installed? ALL OF THEM
Steps: How can we find the bug ourselves? Breed spellcasters and mermaids?
What happens when the bug occurs? Spellcaster father and mermaid mother created female hybrid that walks on tale and cannot change back to human form or change outfits.
What do you expect to see? Either a mermaid or spellcaster not some janky hybrid with a fish tail hopping around land.
Have you installed any customization with the game, e.g. Custom Content or Mods? On console - never used.
Did this issue appear after a specific patch or change you made to your system? No

M: currently a mermaid/spellcaster hybrid who hops around on a tail, can't change outfits, but has both magic and mermaid options.

Not sure if I should hook-up with regular sim, mermaid, or spellcaster to attempt to remove the hybrid dysfunction.

@TacoMama86 Best is to remove one of the occults. There shouldn't be any hybrids.

My child of a mermaid and spellcaster aged up to teen with a spellcaster motive panel and a hydration stat.  I didn't test her to see if she was buggy, but instead immediately fed her two mermaid kelps to remove the mermaid trait.

I was curious, though, so I opened an old save and aged her up in cas.fulleditmode, and that way she was full spellcaster with no mermaid traits at all.  CAS didn't show she was an occult while I was editing her, either.

I then closed without saving and reopened the same old save.  With the birthday cake method of aging up, she's a glitchy mermaid/spellcaster hybrid with the same spellcaster motive panel with a hydration stat I mentioned above, and swims through the ground and stands around on her tail.(I had her blow out the candles and then immediately go swimming.)

She was conceived after the patch that was supposed to fix this (but before her father received the Rite of Ascension--I expected her to be a mermaid only).  So:

Product: The Sims 4
Platform:PC
Which language are you playing the game in? English
How often does the bug occur? When you age a natural born mermaid/spellcaster hybrid to teen.
What is your current game version number? 1.66.139.1020
What expansions, game packs, and stuff packs do you have installed? Sims 4 Seasons, Cats and Dogs, Get Together, Jungle Adventure, Parenthood, Spa Day, Outdoor Retreat, Tiny Living Stuff, Perfect Patio Stuff, Realm of Magic, Island Living, Romantic Garden Stuff, Nifty Knitting
Steps: How can we find the bug ourselves?  Have a mermaid and a spellcaster have a child together.  (Or, in my case, a mermaid and a regular non-occult Sim who received the Rite of Ascension while the mermaid was pregnant--I did it that way on purpose to avoid this bug!)
What happens when the bug occurs? The hybrid swims through the earth, is "stuck" in mermaid form and walks around on their tail, etc.

What do you expect to see? Either 1. for the game to pick one or the other, or 2. for the hybrid to have access to both sets of powers and to be able to change out of their mermaid form on land.
Have you installed any customization with the game, e.g. Custom Content or Mods? No.
Did this issue appear after a specific patch or change you made to your system? No, I hear this is a long-running issue.  My friend who also has a mermaid/spellcaster couple warned me about it.

So, FWIW, the workarounds, as near as I and my friend can see, are:

1. Send your hybrid teen to the Realm of Magic before s/he has a chance to bathe to receive the Rite of Dissolution.  (Making them full mermaid.)

2. Feed your hybrid teen two mermaid kelps before s/he has a chance to bathe. (Making them full spellcaster.)

3. Age your hybrid Sim up in CAS.fulleditmode rather than using the usual birthday cake method..

4. Use cheats to remove one of the two occults from your hybrid Sim.

Alas.  I think a mermaid/spellcaster hybrid would be cool, but not if they're going to glitch constantly.

So I know sims is not officially making hybrid occult sims. But as I have my spellcaster sims married to mermaid sims and they have baby. At first I only thought the baby was only spellcaster from the father. But when he age teen, he is hybrid of spellcaster and mermaid. I am so happy that he is hybrid, being able to have power of Magic and Mermaid. But the thing is my sims is buggy. He wear the tail all the time. Even walking with the tail. I try to change his outfit but all appears the same (like the picture). I try to manage world hoping when I was back to the household the bug will disappear, but its not. I then make my sims travel but the bug is not disappearing. Now I do not know what else to do. Can you help me. Thanks

Now you know why Hybrids are not allowed. I recommend you remove the Mod that made it possible.

To fix the issue you can eat kelp to cure mermaid Or you can go to the magic realm and ask a sage to turn you human.

If hybrid is not allow, why we able to make them? Sims team should fix this since we can make them 😅

if by removing the mods work, am i need to save the game? So now the only solution is by getting rid of one power. Which is sad😔

It was fixed some time ago  which is why you now need a Mod to create them. You will as usual need to save your progress.

@mohammadali118 Merging this with the current bug report on hybrids.

They should not be happening but still do, so bug.