Product: The Sims 4
Platform:PC
Which language are you playing the game in? English
How often does the bug occur? Every time (100%)
What is your current game version number? n/a
What expansions, game packs, and stuff packs do you have installed? All, the problem is with Cats and Dogs
Steps: How can we find the bug ourselves? Still trying to work out the exact reason, by searching the gallery for "Dachshund's Creek" you'll be able to see plenty of other thumbnails that are just trees completely blocking the build
What happens when the bug occurs? I've been building on Dachshund's Creek in Brindleton Bay. When I go to save to my library or upload to the gallery the automatic screenshot is taken from too far back, behind the trees in front of the house. It's a 2 storey build with a small foundation. When I first loaded the empty lot I checked the screenshot and there was no issue
What do you expect to see? A house
Have you installed any customization with the game, e.g. Custom Content or Mods? Never used.
Did this issue appear after a specific patch or change you made to your system? Neutral/Not Sure

I feel like I explained the issue in other fields, here's what I've tried

- Clearing out the cache and reloading

- Raising and lowering the foundation

- Bulldozing and plopping the building down again

- Moving the lot around to various positions

- Moving the house around to various positions

- Being angry at trees

But alas, as much as I'd like to show off my lovely Dachshund's Creek build I can only show off some very nice trees

That's the one! I've shut everything down and I'm turning in for the night but there's a lot of identical images on the gallery when searching for the same lot 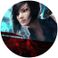 I have the same issue. It also happens on the Hindquarter Hideaway lot. I built quite a nice house which is meant to be viewed on the side so these two lots were perfect for how the screenshot was supposed to be taken, but the trees are in the way.

I have the same issue on Tail's End in Brindleton Bay. 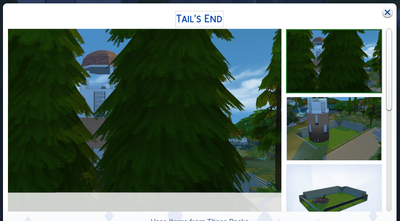 I just thought it might be helpful for people to know that we have a feedback thread on improving Gallery images (trees and other objects blocking views is a problem that goes way back) over on the main Sims 4 forums here.  It was originally requested that we post there by the devs, is stickied, and I think now is a good time to speak up again, given the problems we're seeing in Cats & Dogs.  Not only are there more house view problems as posted in this thread, but the screen shots of pets in the Gallery are pretty bad also (too small and cut off at the bottom).

I had the same problem with my hindquarter hideaway lot. Exactly what I did to fix it was enter the lot in live mode and raise the walls and go to the top floor. I changed the camera angle and zoom until I got a nice view. Then I went into build mode and saved the lot to my library. The game generated new lot pictures. They were not the camera angle I had lined up, but tjey were not obscured by trees either. My entire lot had been obscured. The new pictures are fine. You can see them on the gallery. While you can"t control the gallery pictures directly with the build mode camera, you can influence it, or at least force the game to generate new ones that might ne better.
Message 8 of 20 (1,599 Views)
Reply
1
Highlighted

house on the Hindquarter Hideaway lot