Product: The Sims 4
Platform:PC
Which language are you playing the game in? English
How often does the bug occur? Every time (100%)
What is your current game version number? 1.65.70.1020
What expansions, game packs, and stuff packs do you have installed? Island Living, Seasons, Parenthood, Realm of Magic, Vampires, Toddler Stuff
Steps: How can we find the bug ourselves? Call someone on the phone, and wait for the conversation to end, and then you can see the moodlet pop up.
What happens when the bug occurs? A moodlet for angry or sad pops up saying that the cell phone reception was bad, and talking about how my sim wishes a better phone was available for off-the-grid. I DO NOT HAVE THE OFF-THE-GRID TRAIT FOR MY LOT.
What do you expect to see? Maybe something saying how my sim enjoyed the conversation they had.
Have you installed any customization with the game, e.g. Custom Content or Mods? Yes
Did this issue appear after a specific patch or change you made to your system? No

This bug appears after a phone call to anyone. A moodlet appears saying something about off-the-grid, but my lot has no off-the-grid trait.

Yep, it's still a thing, even on lots that have never had the OTG trait. I've also had visiting sims say they need to go to another place on the lot because of the reception. :/
Message 62 of 88 (996 Views)
Reply
2
Highlighted

I'm also having this issue. no cheats, multiple save files and even tried playing on another profile on same PS4. Always happens to me in Sulani.

Product: The Sims 4
Platform:PS4
Which language are you playing the game in? English
How often does the bug occur? Most of the time (50-80%)
What is your current game version number? 1.29
What expansions, game packs, and stuff packs do you have installed? All I recently bought all the packs on psn
Steps: How can we find the bug ourselves? Start a new save without cc/mods and use the "chat" interaction on the cellphone on a lot without the off-the-grid trait.
What happens when the bug occurs? My sim gets either the happy buff about the line cracking up, related to off-the-grid, or an angry one for the same reason.
What do you expect to see? No buff since the lot is not assigned the trait.
Have you installed any customization with the game, e.g. Custom Content or Mods? Nope I'm on console so I dont even have access to them for there to be some kind of mod conflict
Did this issue appear after a specific patch or change you made to your system? nope because I literally bought all of the packs and the base game at the same time then bought nifty knitting the same day it came out but I was experiencing this before I installed it

My sims get this almost every time they call someone on the phone while not being off-grid, it definitely didn't occur in 2019, so it must be a more recent patch causing it. And no, not using mods.

Got the same issue as well.

Sigh... it hasn't even got fixed since it got reported a couple months ago.

Product: The Sims 4
Platform:PC
Which language are you playing the game in? Português
How often does the bug occur? Every time (100%)
What is your current game version number? 1.65.70.1020
What expansions, game packs, and stuff packs do you have installed? All
Steps: How can we find the bug ourselves? Placing sims to make a phone call to friends and relatives.
What happens when the bug occurs? At the end of the call, the "Bad signal" moodlet appears in the "Out of Network" batch trace.
What do you expect to see? This moodlet only appears when you have the batch feature "Out of Network" in the batch and in all batches of families that I play do not have this trait.
Have you installed any customization with the game, e.g. Custom Content or Mods? Never used.
Did this issue appear after a specific patch or change you made to your system? Yes
Please describe the patch or change you made.

One thing has caught my attention playing The Sims 4 after the last game update. When I place my sim to make a call to a relative or friend, the "Bad signal" moodlet of the "Out of Network" batch feature appears at the end of the call, but there is a problem because in all the lots I play with the my families don't have that trait of lot. I don't know if it's a bug or the producers put it in the last game update.

I don't use mods in my game.

I will put here two images translated from Portuguese to English.

Bad Signal
(From Using a Phone Outside the Network)
Heloisa can't hear because of the static. Oh, wait a minute! Can you hear it now? No? And now? 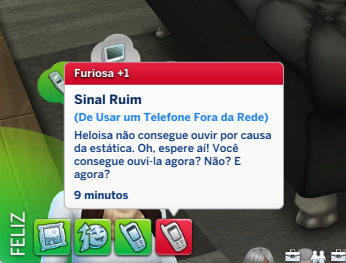 Your Call Has Been Canceled!
(From Using a Telephone Outside a Network)
When Heloisa had services, she felt trapped, pressured to be reached by phone all the time. Not having a signal can be boring at first, but it is liberating! 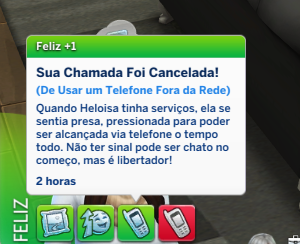 I also noticed this, didn't understand what "off the grid" meant at first as I was fairly new to sims4, but now I know. Never had the off the grid trait, never had cc or mods, but I get a bad/good moodlet also in any neighborhood. :/ Annoying, but not the worst bug I found in the game.

Same! I thought it was a newly added future, like bad mobile provider hahah

I thought so too🤣 I have the same problem.. hope they will fix it soon