Product: The Sims 4
Platform:PC
Which language are you playing the game in? English
How often does the bug occur? Often (50% - 99%)
What is your current game version number? 1.52.100.1020
What expansions, game packs, and stuff packs do you have installed? All except Island Living
Steps: How can we find the bug ourselves? Have a family with a pet. Do any of the following: 1. Have that pet die. 2. Move that pet out. 3. Move a family member out. Watch the whims of the sims that live in the house that no longer has a pet. In my houses, it happened often.
What happens when the bug occurs? Sims continue to get whims that indicate they own the pet. Examples I've seen include wanting to walk dogs, buy pet beds, litter boxes, and food bowls. The whims I'm talking about are the ones that specifically say, "From owning a ...".
What do you expect to see? I expect the sims to stop getting whims about pets they don't have anymore. I understand that some Sims want to buy these things and play with animals even if they don't own one, but those whims don't occur nearly as often without traits or aspirations related to animals.
Have you installed any customization with the game, e.g. Custom Content or Mods? Never used.
Did this issue appear after a specific patch or change you made to your system? Neutral/Not Sure

This problem occurs in multiple households and different saves of mine, including a save I created just to test it. 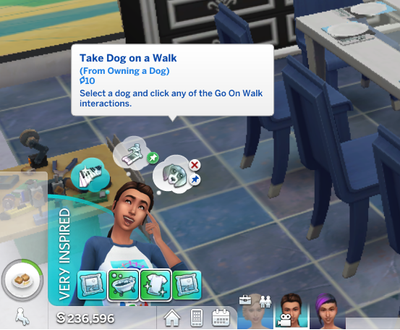