Marked as Solution for Visibility. This is still an open issue.

If anyone of you are still encountering this (without mods) for toddlers, would you be willing to share your save file(s)? 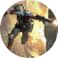