@Katrus91 Yes, that's why I merged it with the thread that said: No Cheats used ?

@Katrus91 Do send your save to EA QA.

Your issue is: You changed traits after putting the Sim into CAS from the library and then changing traits, right ? Then you still had moodlets for the traits the Sim had before you changed them ?

There are two reasons where it seems to happening without Cheats

- Change traits via CAS after downloading through the library/Gallery

- Using a potion to change the traits

And currently this thread is for both.

I have sims that I changed traits for using the re-traiting potion through the rewards store- so not cheating, and they still behave as though they have those traits. Previously mean sims are still mean autonomously even though I remove the trait and replaced it and did not cheat to remove the trait. I know traits still persist if cheating is involved but that is happening here anyway.

Is this still being investigated?

I downloaded a Sim from the Gallery that had non-committal and genius.  I changed her traits before starting my save file. I noticed she was getting the negative moodlets from these two traits (she had gotten married and I was having her pursue creative passions), so I bought a re-traiting potion to try and fix the issue, figuring a cheat might not help.  I used the re-traiting potion to no effect.

@rae84 I have no info on the status. Definitely doesn't hurt if you send your save to EA

@scyll85I am having this issue in 2021. I downloaded a gallery Sim that looked very attractive, but little did I know that he had buried within him somewhere the noncommittal trait. As a result he is tense with his partner, he is tense with his job, it is awful. I tried removing the trait first in CAS but of course that did not work. Then I tried using the cheats to remove the trait, to add it back and then remove it again, and to add contrasting traits such as family oriented. That did not work. I also tried giving him the carefree trait. That did not work either. Any suggestions? Thank you

PS and just discovered he also had a hidden materialistic trait as well. Can’t seem to resolve that either. If I can’t fix him he may have to “disappear.”

Ok how about getting moodlets for traits that the sim probably never had? I couldn't find a thread for it. This is Kado Akiyama, a premade from Snowy Escape and he has a moodlet from the genius trait (he doesn't have that trait). 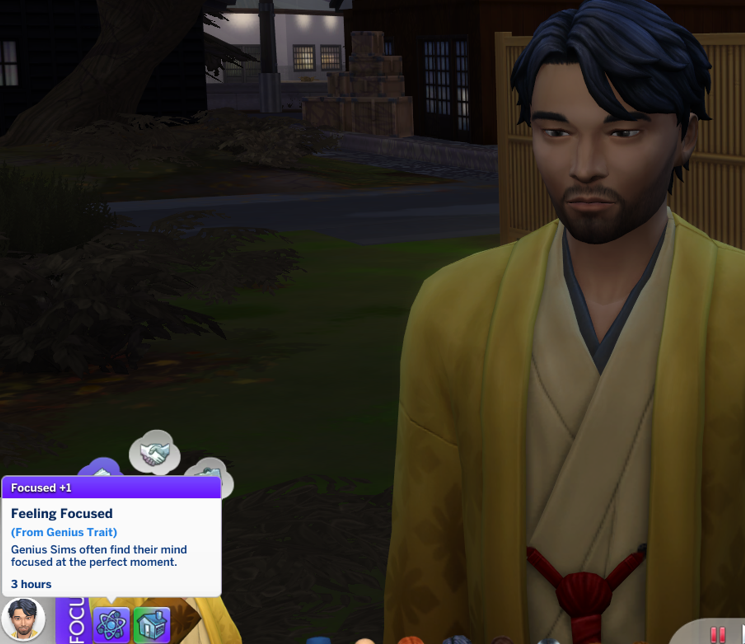 I've seen this happen before when I load a family and then someone has the "Feeling focused, from Genius trait" buff even though the sim doesn't have that trait. And I think I've seen some other buffs for other traits too.

I had this one recently with a sim that I made in CAS as materialistic, then got fed up with pandering to that and changed her traits in cas.fulleditmode. She went on getting the tense moodlet from stale surroundings, even though she no longer had the option to admire any new acquisitions. It's very irritating - if you've changed their traits, whether by a retraiting potion or in cas, they should be changed!