Product: The Sims 4
Platform:PC
Which language are you playing the game in? English
How often does the bug occur? Every time (100%)
What is your current game version number? 1.60.54.1020
What expansions, game packs, and stuff packs do you have installed? All, except the stuffpacks Tiny Living, Laundry Day and Mochino.
Steps: How can we find the bug ourselves? Doctor Career from GTW.
What happens when the bug occurs? Sim in Doctor Career, get's "stuck" in workmode. Workday doesn't end. Can only click on Sim and choose go home, they DO go home, but work icon still active.
What do you expect to see? A Sim going home after the active Workday is over.
Have you installed any customization with the game, e.g. Custom Content or Mods? Yes
Did this issue appear after a specific patch or change you made to your system? Yes
Please describe the patch or change you made. 1.60.54.1020 Tiny Living patch

My Sim, as seen on the  ScreenPrint, is all cozy at home, but still shows as at Work. I couldn't  leave Work early, and when I click on the Work Icon on her Avatar, no options appears. Tried to Reset Object (Testingcheats),  change locations, repair Game and such. - Even tried going into CAS, and back out. A lot was going on at work at the time before the bug occured: She started the Shift in summerclothing, not changing into Work Clothes. I chose to stay late, trying for promotion, which I got. And then misdiagnosed a patient shorly after, just before shift ended. Then I was stuck at Work, with only the option to click on the Sim, and choose go home. I do use CC, Hair, Make Up, And Clothes, but no direct Game Changing Mods. This Appeared after the new Patch for Tiny Living. Can find a new job, but would like to see Her continue this one for a while. 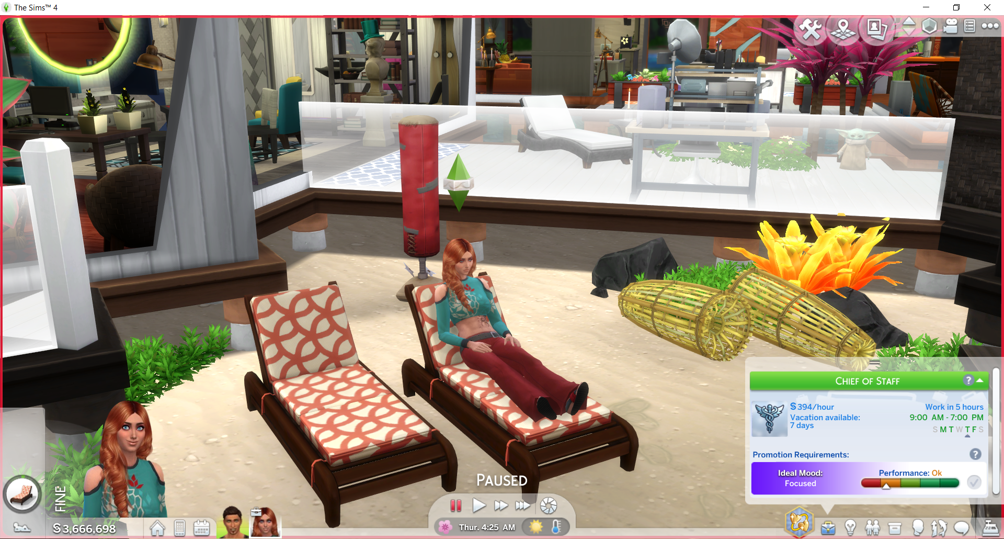 @Compulsivianthis is temporarily created by the patch sending sim to work again and back should solve the work bug, it does that too me sometimes after the patch. If you can send the sim home and you still got a work icon when you get home, after going to work through active or non active when they complete the required work schedule completely from start to finish your sim will return to normal.

Edit: I almost forgot one thing sometimes if sending sims to another lot can clear the work icon.

@Sid1701d9  Thanks for the Tips, but they didn't help me, alas. The changing of to another scene, was already tried when the problem first occurred, since I knew it had worked with other bugs in prior Sims 4 problematics. Tried both again, though, just in case. The work option didn't appear at all.. - In an active career, You'll wait for the pop up, join them or send the Sim alone, which didn't occur. - Probably since, She's already seen as working. And can't physical show up on the Hospital, as it's a Rabbithole Location.

@Compulsivian Are either of the Sims at University ?

Did you send them to go to work on their own at any point or turn off the game while they were at work ?

For active careers, the only option that does work to unbug the Sim is to quit the career and rejoin.

This issue is a symptom of something going wrong and the game not being able to properly reset the status of the Sim.

Since you said a lot was going wrong at work before this occurred, this might just have been a follow up issue on that.

Try if you can unbug the Sim by quitting and rejoining and if it's occuring again the next day.

@crinrict No one in the Household is at Uni at the moment. Her Fiancee is a Covert Operator, level 10. She have been at work, alone, on two occations. I couldn't join because of active Holidays, Winterfest and New Year's. At those days, I can't tag along with my active working Sim, even though, I finish the Holiday early. - Probably because I only ended the Holiday Active Event after the Workday started. She did, though, have several problemfree Workdays after that, as I remember. Will try and rejoin the Career then.

@Compulsivian I'm having something similar, however the social icon is what's showing up not the briefcase. Started when my chef got offered retirement and she took it.
Message 6 of 31 (1,155 Views)
Reply
0

@NannyPhanny Please create a new thread for that. These issues are very individual and yours sounds different.

@Compulsivian Let me know if you have any luck fixing it this way and if it occurs again. If it was a one time thing, I wouldn't worry too much.

@crinrict Will do, playing the Household atm. I've quit and  took the Job again, and the Problem seems to have fixed, but haven't started a Workday yet though. Will play about a Sims Fortnight, and see if the problem recurring before moving on to other Jobs or Educations.

Second Workshift, She was attending.

First Shift was fine, even though she joined Work without changing to Workclothes. - Actually She chose to meet up in an Outfit, She doesn't even wear in any Settings, Work or Personally.

- But no problems otherwise at that day. I had to shot down the Prank Day Event though, for Her to go to Work.

Second Workday, I had to shot down the Love Day Event. She appeared back in the proper uniform, for the Doctor Career this time, but it went down Hill from there. She (my self) misdiagnosed again, shortly before being up for promotion, and I tried to stay late to make it to promotion. Almost same Scenario as the first time.

This time I have to say, there's something wrong with the diagnosis/signs of ailments too.

I follow the Signs/Symptoms as witnessed by other players, to find diagnosis, and never had any major Problems with those lists before.

- In these selfexperienced misdiagnosing scenarios, however, very few, if hardly any symptoms appear. My last Patient had only one visible symptom, Dizziness. I had two choices, a compelling diagnosis, to choose from. Triple Threat and Bloaty Head. I chose Triple Threat, and got it wrong. I do watch patients in idle, and watch out for rashes and such.

I'm lost for further action at this point. I chose to exit to Main menu, but will probably have the same problem if I keep playing this Career further. I'm not the most patient Simsplayer, when it comes to those kind of problems. Getting knocked back to level 8 in a career every time the problem occurs, is not worth it in the long run. - If any other Problemsolving isn't required at this point, I will find Her a new Job, and forget everything about Active Careers for now.