Here's an obscure bug that I'm not sure anyone else would bother to report, or even notice. It seems the texture for two of the mounted fish are broken! Each time I have loaded this lot a different random texture has replaced the correct one on these two fish (the Discus and Cichlid). Even more interesting, if you hover over the fish with the cursor the correct texture does show up! I removed all my mods to make sure it wasn't caused by one and sure enough the problem showed up again.

I will not be checking for replies to this thread, this is a bug report for the benefit of the team.

While I am here I might as well mention that I have been recently affected by three old bugs that have been reported frequently and never fixed, and how disappointing it is that these old issues continue to not be worked out. Namely items in inventories vanishing or (or, rarely, duplicating) when a Sim moves between lots (frequent saving SEEMS to usually help with this, but nothing is consistent), moving household members in or out of a household resetting the household's collection progress (which in my recent case was VERY frustrating because my sim had the angler ace aspiration and his collection of fish, necessary to complete the aspiration, was set back and I have had to begin recollecting fish he has already caught, he keeps a collection of mounted fish for everything that he catches but mounted fish do not count for the fish collection even when placed in the Sim's inventory), and the whim for starting a club gathering (which shows up so frequently it really HAS to work right) not completing because some Sims or Clubs get "stuck". Regarding the subject of mods these problems all frequently occured before I ever started using mods so it is not a problem stemming from mods.

Re: Wrong Texture on Mounted Fish

I know it's been a while since you made this report.

I don't have a Discus in my game currently but I seem t have no issues with my cichlids.

Are you still seeing this ?

Re: Wrong Texture on Mounted Fish

I've got a mounted Discus in my game and it looks normal.
Message 3 of 8 (304 Views)
Reply
2
Highlighted

Product: The Sims 4
Platform:PC
Which language are you playing the game in? English
How often does the bug occur? Every time (100%)
What is your current game version number? 1.53.115.1020
What expansions, game packs, and stuff packs do you have installed? All but Spooky Stuff.
Steps: How can we find the bug ourselves? Try mounting fish.
What happens when the bug occurs? When the mounted fish is placed on the wall, the graphics glitch out.
What do you expect to see? I expect to see the fish.
Have you installed any customization with the game, e.g. Custom Content or Mods? Never used.
Did this issue appear after a specific patch or change you made to your system? Neutral/Not Sure

Strange graphics glitch when you mount fish. I've had this happen before so I just stopped mounting them. The first image is with my cursor on the pic; the second image is without. I reloaded the game and the glitch was still there. I have no mods. I recently repaired my game (approx. 2-3 days before).

@nualla_6109 Is it just the glitch which is very visible on your second picture or also wrong textures like this user: https://answers.ea.com/t5/Technical-Issues-PC/Wrong-Texture-on-Mounted-Fish/m-p/7241328 ?

Could you post a picture of your ingame graphics settings as well as your graphics card model ?

Oh that's interesting, because it looks like the wrong texture issue that the other player is having. I didn't know what to call it really because when I put my cursor on the the fish, the correct image appeared. 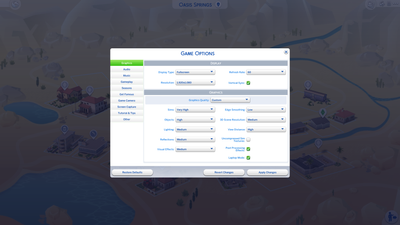 My graphics card is an Nvidia GEForce GTX 1070

@nualla_6109 Could you test if it makes any difference if you turn off post processing and switch everyting to high ? 1070 should be able to handle that.