Product: The Sims 4
Platform:PC
Which language are you playing the game in? English
How often does the bug occur? Every time (100%)
What is your current game version number? 1.66.139.1020
What expansions, game packs, and stuff packs do you have installed? Island Living, Get to Work, Jungle Adventure, Parenthood, Vampires, Outdoor Retreat, Tiny Living, Toddler Stuff, Vintage Glamour Stuff, Backyard Stuff, Kids' Room Stuff, Romantic Garden Stuff, Movie Hangout Stuff, Perfect Patio Stuff
Steps: How can we find the bug ourselves? Have a vampire with the Vampire Creation ability and a mortal Sim. The option to Ask to Turn and Offer to Turn are both missing under the Friendly category.
What happens when the bug occurs? No Offer to Turn or Ask to Turn interaction.
What do you expect to see? Both choices to be available under the Friendly category.
Have you installed any customization with the game, e.g. Custom Content or Mods? Never used.
Did this issue appear after a specific patch or change you made to your system? Neutral/Not Sure

The only way I can turn mortal Sims is to forcefully bite them under the Vampire category. This issue seems to have appeared after the latest update as I never experienced this before.

Any kind of help is much appreciated. 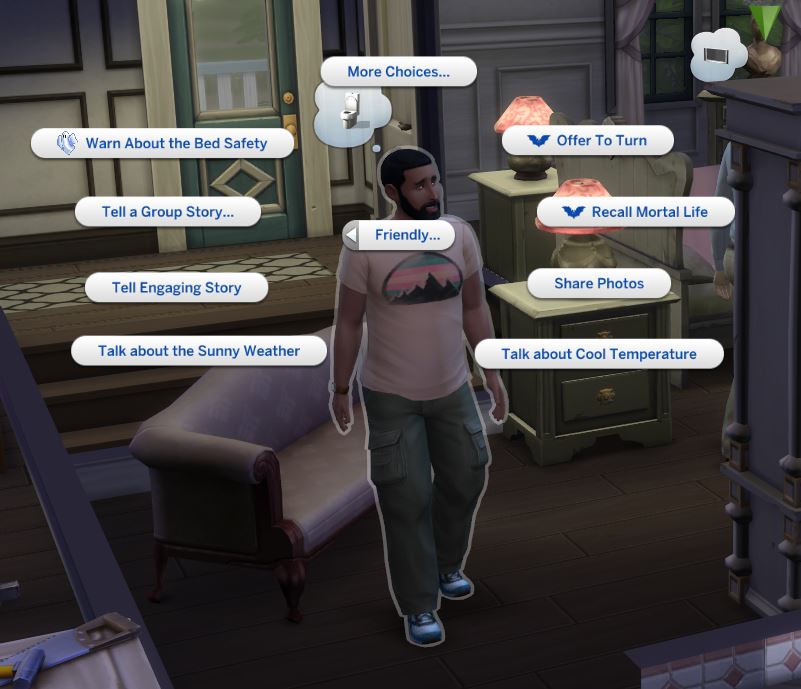 That's what you mean, right ?

@crinrict Yes, I just don't have that option anymore which is really weird and unusual. I went a few saves back and still no luck. No idea why it's happening.
Message 3 of 11 (1,087 Views)
Reply
1

@ashleena123 Have you tried repairing your game yet ?
Tested with another Vamp ?

@crinrict Tested with a few other vamps with the same result.
I haven't tried repairing yet so I guess I'll give it a go and hope it helps. I'm going to check back soon with the results
Message 5 of 11 (1,079 Views)
Reply
1

Checked this with one of my vampires, Adriana Sheffield. Adriana is friends with Clara Bjergsen who happened to be in the neighborhood. Offer to Turn was not on the Friendly menu the first time I checked, so I sent Adriana over to Clara and started talking. Clara was uncomfortable because it was raining, so Adriana asked to see Clara's cold weather outfit. After changing clothes, Clara was no longer uncomfortable, the conversation had reached Pleasant, and Offer to Turn was back on the Friendly menu. I then checked several other sims that are Adriana's friends and acquaintances. Offer to Turn was available on all of the other sims I checked, including another Uncomfortable sim. I don't know why Clara was different.

I would suggest that you just do a bit more relationship building with the Sims you would like to turn.

Okay so I did a few testings, the results are... well interesting.

First I created a vampire and a normal Sim. They weren't even friends yet but my mortal Sim had the Ask to Turn option; my vampire Sim didn't have the Offer to Turn interaction though.

Then I visited a family of two, a young adult vampire and his elderly mortal father. The son has the ability to turn others yet it was not there this time when I clearly remember it being there before the newest update. (He didn't even have that ability back then - before the update - but the option was there anyway)

I guess it was taken out since vampire masters and their offsprings are kind of count as family members (this explains why the Domestic trait works between a vampire and a Sim they turned) and it would mess the family tree up? Not sure.

Moving on I visited an already existing family of a vampire and a normal Sim whom were BFFs. No option from either of them.

For the fourth time I created another vampire and a mortal Sim, made them interact until they were Good Friends, leveled my vampire Sim until she could purchase the Vampire Creation ability then checked if the option was there - it was not.

However a bit later they interacted again and as soon as the conversation reached "Pleasant Conversation", my mortal Sim finally had the option to Ask to Turn just like my vampire the Offer to Turn one.

Is this something new then? Because if it is, it seems it's much harder to turn someone which I really like.

But if not... Maybe it's just a weird glitch?

I was having the same problem. The "pleasant conversation" solution worked to bring back the "offer to turn" and "ask to turn" options. However, after the vampire bit the sim the interaction would end and the sim would not be turned. This was being caused by the fame quirk "no touching". After the vampire had raised their relationship with the sim the interaction completed and the sim was turned

Re: [UNSURE] [V] Vampire no longer has 'Offer to Turn' option

@ashleena123 Yes vampires do not offer and there are no social interactions to ask or offer for both human and vampire Sims. Ever since the latest patch.
Message 9 of 11 (936 Views)
Reply
0

Re: [UNSURE] [V] Vampire no longer has 'Offer to Turn' option

Just bought the pack and was having the same issue. What bugged me was that I saw the interaction "ask to turn" available almost at the beginning of the friendship, but I didn't want it at that point (building a story). And when I wanted it, it was gone! And they were maxed out in romance and friendship!

So I found this thread and tried to make them have a pleasant conversation, but it was still not working. So what did the trick for me was "deep conversation" and "get to know" interactions. I actually use those a lot with budding friendships and then drop them. I'm guessing they're connected with the "ask to turn" interaction. If on purpose, well I don't know.