[NEEDS INPUT] Sprinklers in greenhouse not watering some plants

[NEEDS INPUT] Sprinklers in greenhouse not watering some plants

Product: The Sims 4
Platform:PC
Which language are you playing the game in? English
How often does the bug occur? Occasionally (10% - 49%)
What is your current game version number? 1.66.139.1020
What expansions, game packs, and stuff packs do you have installed? All up to, and including, Journey to Batuu
Steps: How can we find the bug ourselves? Build a greenhouse with sprinklers covering all plants
What happens when the bug occurs? Some plants are dry, even though the rest of the plants in the sprinkler's "work area" have been watered.
What do you expect to see? All plants being watered by sprinklers, as they always have
Have you installed any customization with the game, e.g. Custom Content or Mods? Not now. I've removed them.
Did this issue appear after a specific patch or change you made to your system? Neutral/Not Sure

I usually have large greenhouses full of plants, automatically watered every morning, using sprinklers. Lately some of the plants are not being watered, so my sim has to manually water them.

The sprinklers are not in need of repairs, they are all turned on every morning (except the ones that are disabled, because there are no plants around them), and the plants are placed correctly within the area of the sprinklers. No MOO used, so they all snap properly to the grid, 9 plants around every sprinkler (1 plant for every "tile") of the sprinkler footprint). Currently playing a test save without CC/Mods, but it has happened in saves with mods also.

If I turn on the sprinkler manually, SOME times the plant will be properly watered, but not always.

Adding a picture of one sprinkler with 9 plants, 8 are watered and one is not.

I usually have large greenhouses full of plants, automatically watered every morning, using sprinklers. Lately some of the plants are not being watered, so my sim has to manually water them.

The sprinklers are not in need of repairs, they are all turned on every morning (except the ones that are disabled, because there are no plants around them), and the plants are placed correctly within the area of the sprinklers. No MOO used, so they all snap properly to the grid. Currently playing a test save without CC/Mods.

Does anyone have any idea why? Is this intended, because sprinklers are not meant to be used "indoors"? Weird if that's the case, because its been working wonderfully for 3 years for me

I haven't seen any bug reports about this, only a post in techical support like 2 years ago.

@Kathykins It's hard to say as I'm currently avoiding my home with a large greenhouse and indoor sprinklers since plants are currently all kinds of buggy.

Does it appear that the plants are being watered by the sprinklers, or are the relevant sprinklers not coming on? Are your plants behaving normally otherwise (aside from needing to be watered manually)?

Depending on the packs you have, personally I would get a gardener, butler, or patchy to have them manually water until a patch comes in that addresses the current odd plant behaviors. Then if the plants were still not being watered look further into it.

It's possible that your Mods/CC have effected it... did you also remove the cache after removing the Mods/CC? To do so:

If you would like to upload your lot to the gallery I could try it out. I have no Mods/CC. If you do this, just let me know here the exact name of the lot and your EA ID in the gallery if it's different than here.

@SheriGR Thanks for the reply

I'm currently playing a save without mods/CC, for the past week or so. I always try to remember to clear cache after/before every game session.

I really wanted to avoid gardening as well, but I'm playing a scientist and I need plants for his work, since nothing can be harvested at the Lab. I've had a "few" problems in home gardens as well, but so far in this house its been behaving nicely. No reverting to dirt piles, yet. Crossing fingers! The sprinklers all turn on at 6am. Most plants are watered, but there are just SOME plants that won't be.

I did some testing last night (its early morning here now) and I turned on the sprinklers manually and had them on for a little while. Some plants would be watered then, others not. Got me thinking the automatic watering wasn't enough, and they needed more water to be "saturated", I guess?

I'm quite "protective" of my gardens, after townies have just waltzed in there, harvesting and doing MY sims work :D I lock the door for everyone but household, sometimes only allowing one sim in there. Everyone will keep going into the greenhouse to talk to plants and research otherwise. Always have to drag my sims away from there, to do things I want/need them to do.

It is happening in more than this one house. At least the last 2 I've played the past weeks, including the vanilla save I made for testing. I can upload that house as that's the one I'm seeing problems with right now (including plants not growing even after a couple sim-weeks of being planted) and I know mods are not the cause of any issues.

Anyway, gallery name is the same as here, and the house is called Haywood's Wreckage - test. Don't mind the lack of dining table, sim was wasting so much time sitting down there, even though I asked him to grab food and watch cooking show, like I always do if their cooking is not maxed. He'll stand in front of the fridge otherwise. Guess I build more for functionality than beauty, when I actually play a house :D

Thanks for taking the time! Haven't read anyone else with this issue, although hard to tell with all the gardening stuff going on these days.
Message 3 of 12 (1,873 Views)
Reply
1

@Kathykins I placed the lot and experimented by watering with the sprinklers for 1.5 days. (Note, I have all packs, no cc or mods ever, am fully updated, and am on Mac):

I also went into a build I have with an extensive greenhouse and sprinklers and tested there. I found in that case also that I had a small number of random plants that still wanted water after being sprinkled all day.

I would assume that this may be plant related due to bugginess currently, but it may not be. I will check if this should be merged into the gardening master thread, if this should have a bug report, or if it should remain here.

@SheriGR hahah even puddles outside. I had to upgrade those sprinklers fast, because even ONE puddle would give my Neat Scientist a +THREE uncomfortable moodlet. He would absolutely freak out, scream then hide in a corner seeing all the puddles a full day of watering would produce :D

Anyway, yes the amount of plants seem right. I don't have a full greenhouse at the moment, only about 35 plants, including some spliced plants. Its about half of what one of my larger greenhouses would have.

I checked again just now, and only one plant needs water. The other 8 in that sprinkler area are fine and need nothing. Its always different plants.

I don't use MOO when building, some times Alt-placement, but never with gardens or sprinklers. I finish the greenhouse how I want it, then take the roof off, so its concidered "outside". Then I place the sprinklers, and put the roof back before planting time. I practically always have the same layout, since at least 3 years now.

Thank you so much for checking this out! I'll continue to monitor things and I'll of course also add what I can in the other gardening threads. More info is good. I know gardening is messy right now, but I just can't stay away, its a big part of my enjoyment of the game, I just have to put aside the annoyances right now, and have faith!
Message 5 of 12 (1,851 Views)
Reply
2

@Kathykins Yes, I also LOVE gardening in the game (as you can probably tell if you look me up in the gallery - I have tons of plants posted).

I never removed the roof to place the sprinklers, but that would work. If you delete one outside wall panel in the room add the sprinkler then put the panel back, that works also.

I tested this in my own greenhouse also and just added notes on that to the post I made before. Thank you for the information. If I were you I'd stick a Patchy on the bare end of the greenhouse. You have to socialize with him to a point where he 'activates', but at that point he would water any plants the sprinklers miss, weed, etc. Free gardener! Yay!

@Kathykins Can you please make a Bug Report for this issue at this link?: https://answers.ea.com/t5/Bug-Reports/bd-p/The-Sims-4-Bugs

This way we could begin the testing with this info we've got so far, and we can see if others are experiencing the same things. They may then perhaps test &/or add their information also. Thank you!!

@SheriGR and @Kathykins Great to read that we have the same way of building greenhouses and a high interest for plants and planting. I wonder if this issue of the sprinklers could be related to the new way of gardening that entered the game after the EP 'Eco Lifestyle'? I noticed that in this EP there are new planters that automatically water the plants. Thus, as a matter of fact, making the usage of the sprinkler option completely obsolete. You will be able to find these planters using the showhiddenobjects cheat at the outside department in the build mode 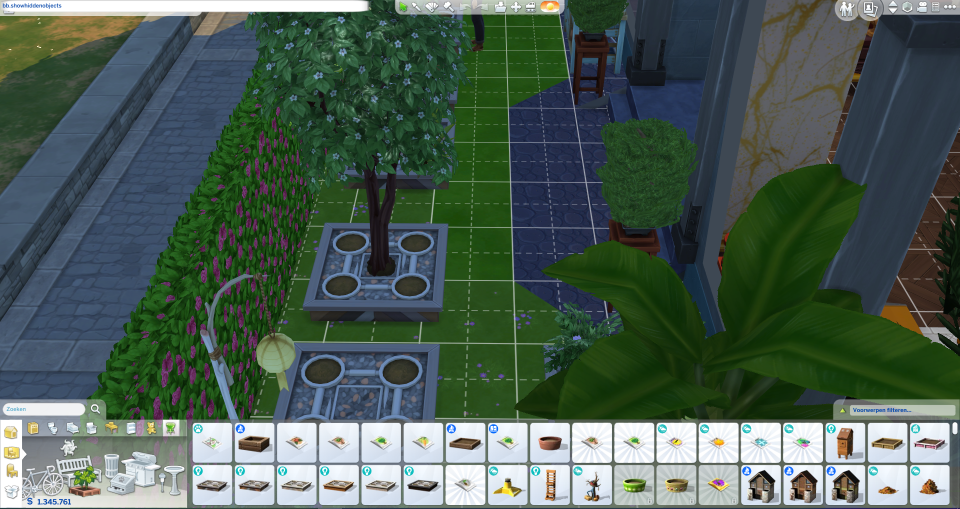 As soon as I knew they were available I started using them for my greenhouses and also outside. I don't have to use a gardener or scarecrow.

I will also start checking my other greenhouses in the rest of the plots and households i did not tend to for a while.

@SheriGR Sure thing, I'll do my best :D

I also removed one wall and placed it back before, but found the roof thing to be easier, really. No need to switch to wall tool, then pick the right wallpaper after.