[NEEDS INPUT] Shadows on objects in a split level space

[NEEDS INPUT] Shadows on objects in a split level space

Product: The Sims 4
Platform:PC
Which language are you playing the game in? English
How often does the bug occur? Every time (100%)
What is your current game version number? n/a
What expansions, game packs, and stuff packs do you have installed? The Sims 4 Premium edition Expansion packs: Cats and Dogs, City Living, Get together, Get to work and Pre purchase Seasons. Game packs: Jungle Adventure, Parenthood, Spa Day, Outdoor Retreat Stuff Packs: My first Pet Stuff, Laundry Day Stuff, Romantic Garden Stuff, Movie Hangout Stuff, Cool Kitchen Stuff, Perfect Patio Stuff and Luxury Party Stuff. Free Stuff: Holiday Celebration Pack
Steps: How can we find the bug ourselves? 1. Build an L shaped structure (or a square where you remove 1/4 on a foundation on 2nd tick from bottom with lowest walls. 2. Divide the room to cross off the small bit of the L shape, remove the floors on smaller section and remove the wall in the room to create a multi-layered room. 3. Place tall windows that cover most of the wall (I used Spa-day windows as they fit with the doors of the same style) 4. Add glass roof on entire building.
What happens when the bug occurs? The tall windows on the upper part of them turn pitch black when the roof is on as they can't register that the glass roof should let in light. This happens on the windows that are above the foundation walls because they are not considered as a room.
What do you expect to see? That the windows should look like all the other windows in the same building, even if the wall is connected to the foundation and is standing on the ground.
Have you installed any customization with the game, e.g. Custom Content or Mods? Never used.
Did this issue appear after a specific patch or change you made to your system? Neutral/Not Sure

Hello! I hope you find this helpful! I would love for this to work as I prefer using the short walls, and I still want trees growing indoors. the 2nd tick of the foundation and removing the floor will give just enough space to fit trees indoors without issues.

This issue I just encountered because I am trying to build a good tiny house and hopefully won't have to result in building a mansion as I prefer smaller builds in general.

Many thanks for your help!

Re: The Sims 4 lights on windows

My first thought is that it's an anomaly with split-levels. I've tried making them pre- and post-patch, but end up frustrated with how buggy they can be. Wall cutaway mode stops working for me whenever I try to build one.
Message 2 of 15 (1,266 Views)
Reply
0
Highlighted

Re: The Sims 4 lights on windows

I'm also seeing a lighting issue with windows on a split level in my game, but the roof is not a factor; it's the split leveling that's causing it.  It happens at all wall height levels and for any window that is placed near the top of the wall; the closer to the top, the darker the shadow cast on that portion of the window.  Depending upon the size and shape of the split level area, not all windows may be effected.  I started with a 4x4 space with 2x2 windows along the exterior walls, and those windows all had the darkening.  When I expanded the area to 9x9, only a couple of the 2x2 windows on the far right had it.  Will add to our list.

Product: The Sims 4
Platform:PC
Which language are you playing the game in? English
How often does the bug occur? Every time (100%)
What is your current game version number? 1.55.105.1020
What expansions, game packs, and stuff packs do you have installed? seasons get to work cats and dogs city living get together dine out outdoor retreat parenthood cool kitchen stuff laundry day stuff spooky stuff toddler stuff
Steps: How can we find the bug ourselves? make a big room with a foundation put a roof on it. make a smaller room and delete the floor in the smaller room. make sure theres still a roof on top of that part of the room. delete the walls that connect to the bigger room to make it open again.
What happens when the bug occurs? No matter how many lights i put down the floor and foundation in the smaller part of the room looks dark. when i place objects in the room they look completely normal and well lit while the floor stays dark. the tops of the full sized windows that i put in the area have a dark shadow on top of them as well.
What do you expect to see? the room to be well lit and to look like its lit so i can use it as part of the house
Have you installed any customization with the game, e.g. Custom Content or Mods? Never used.
Did this issue appear after a specific patch or change you made to your system? Yes
Please describe the patch or change you made. it happened after the update with the customisation stairs but i didnt try it before then so it could have been happening before that

@jessicaand481 Unfortunately I was unable to reproduce. I tried placing a restaurant I have made previously that has a sunken room, plus I tried adding a building with a foundation then two sunken rooms with one being in the corner like yours, and still cannot reproduce. (Please see my screenshots.)

Something I could not reproduce was the foundation color in yours, which looks to me like it may be unusual. Can you please tell me then name of the foundation that you used on your building?

Also... can I please have you try the followwing to see if it makes any difference?

Delete the localthumbnailcache.package file in your 'The Sims 4' folder and restart the game and so that the game will re-create the folder.

Then run a game repair [ Open Origin, click 'Game Library' then right-click Sims 4 > Repair Game ]. Make sure to let it run until it has completed all repairs (it will do the base game first, then run through each of your expansions/packs).

Can you please upload your build to the gallery so I can test it in my game? Once it is in the gallery please share here the exact name of the lot and your EA ID / name in the gallery. Thank you! 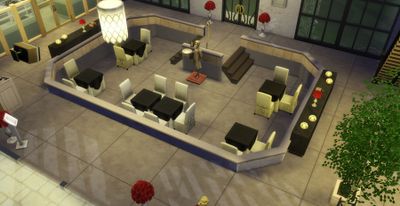 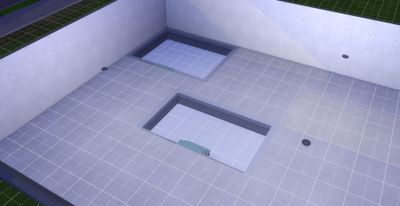 SheriGR ☕ –  I don’t work for EA.
Me Too – if you also have this problem – first post on thread has this button
XP – for helpful comments (& to help others 'level up')
Mark As Solution – to help others find the answer to the issue now & in the future
Message 5 of 15 (1,017 Views)
Reply
0
Highlighted

It's been around since the game was released and seems to do with sunken rooms on the edge of a room. I managed to repro your issue: 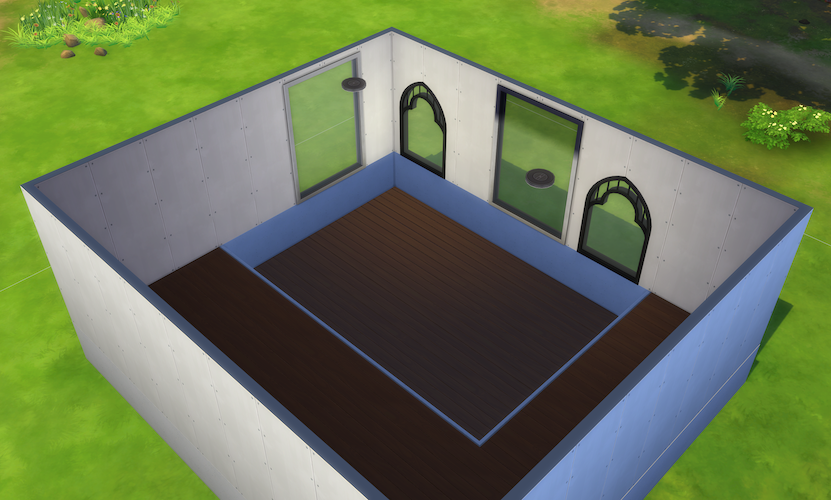 I'll have a hunt around for older posts on the issue but as far as I am aware there is no workaround. If you have the sunken area at least one tile away from the wall it won't happen. If you remove the ceiling it also doesn't happen.

@SheriGR The foundation I used called Firmament Foundation. I deleted the localthumbnailcache.package file and tried to recreate the glitch and I couldn't. I think deleting the file has fixed it. Thank you so much
Message 7 of 15 (930 Views)
Reply
1
Highlighted

Product: The Sims 4
Platform:PC
Which language are you playing the game in? English
How often does the bug occur? Occasionally (10% - 49%)
What is your current game version number? 1.61.15.1020
What expansions, game packs, and stuff packs do you have installed? Get together, Get to Work, City Living, Cats & Dogs, Seasons, Island Living, Dine Out, Parenthood, Jungle Adventures, Fitness Stuff, Toddler Stuff
Steps: How can we find the bug ourselves? I know it has something to do with the split leveling, might have something to do with a wall trim as well. I've deleted rooms, created new rooms, deleted and redid walls, removed ceilings... The dark placement on the windows changes, as well as the affected windows, but it always affects one or more, never none.
What happens when the bug occurs? The top part of a window (or half, right or left, of the top part) gets pitch black.
What do you expect to see? I expect to see my windows without the pitch black shadow.
Have you installed any customization with the game, e.g. Custom Content or Mods? Yes
Did this issue appear after a specific patch or change you made to your system? Neutral/Not Sure

In the sims4problem.png, by just adding a little 1 width flooring around it, solves the problem. But how can i have split leveling without this problem? Thank you for the help ^^

Re: Top part of Windows get Pitch Black

@GreenTea_3D Merged your post with another bug report on this. 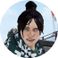 Product: The Sims 4
Platform:Sony Playstation 4
Which language are you playing the game in? English
How often does the bug occur? Often (50% - 99%)
What is your current game version number? 1.23.61.4400
What expansions, game packs, and stuff packs do you have installed? Seasons, Island Living, City Living, laundry day, perfect patio, back yard stuff, spooky stuff, jungle adventure
Steps: How can we find the bug ourselves? Create a split level room, the issue is occurring whenever placing stairs from the foundation/higher level to the ground/lower level. If placed against some walls, the shadow disappears, however not all walls produce the same effect.
What happens when the bug occurs? The landing or top stair is completely black when split level room is enclosed.
What do you expect to see? The correct lighting on stairs if placed inside split level rooms.
Have you installed any customization with the game, e.g. Custom Content or Mods? On console - never used.
Did this issue appear after a specific patch or change you made to your system? Neutral/Not Sure

• removing a section of wall to make the game think I'm outside, placing the stairs, then replacing the wall. Stairs turn pitch black as soon as the room is enclosed again.

•placing walls in sections where I want the stairs, didn't work. for some reason only certain walls stop the shadow issue.

•placing a wall between the higher level and the lower level, making the ground level 1 separate room. No difference.

•begging the game to just let me have a split level home without all this nonsense please I just want some stairs. No difference.

Last photo is an example of the only wall placement that shows the stairs normally.