Product: The Sims 4
Platform:PC
Which language are you playing the game in? English
How often does the bug occur? Every time (100%)
What is your current game version number? 1.68.154.1020
What expansions, game packs, and stuff packs do you have installed? All of them
Steps: How can we find the bug ourselves? 1. In Snowy Escape, have an adult/teen/child try to sled with a vampire toddler on the bunny slopes. 2. In the sim selection menu for sledding partner, vampire toddlers will not show up as an option; however, all human, mermaid, and spellcaster toddlers will show as options (it's only vampire toddlers that can't sled).
What happens when the bug occurs? Vampire toddlers are not options for sledding when choosing 'sled with...' on the bunny slopes. And if the vampire toddler was the only sim that WOULD be an option, the 'sled with...' option is grayed out saying no valid sims to sled with.
What do you expect to see? I expect to see vampire toddlers as options to sled with, same as any of the other toddler subspecies, so that my sims can sled with their vampire toddlers.
Have you installed any customization with the game, e.g. Custom Content or Mods? Not now. I've removed them.
Did this issue appear after a specific patch or change you made to your system? Yes
Please describe the patch or change you made. The release of expansion pack Snowy Escape.

This bug occurred both with and without mods; testing without mods I used a vanilla new game with no mods folder and localthumbcache deleted. The family was comprised of an adult, a human toddler, a vampire toddler, a mermaid toddler, and a spellcaster toddler. When choosing 'sled with...' the human, mermaid, and spellcaster showed on the sim selection menu, the vampire did not.

@Masspecgirl19 Can you test if this works for you if you go sledding at night ?

I did have the option at night but not during the day.

Ah yep, just tested! After 8 pm, the vampire toddler does show as an option to sled! I do wish they could go during the day as well, especially since their powers haven't kicked in yet and they don't necessarily have sunlight-susceptible parents.

I did not test anything with umbrellas, though.

On PS4 I saw the same with a vampire toddler. During the day there was no sledding options, but when night came they could sled. 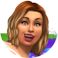 I've just searched why my vampire toddler can't sled. The previous toddler who is a spellcaster vampire hybrid got the option. Her vampire father can sled during the day no problem.