Product: The Sims 4
Platform:Mac
Which language are you playing the game in? English
How often does the bug occur? Every time (100%)
What is your current game version number? 1.60.54.1220
What expansions, game packs, and stuff packs do you have installed? All
Steps: How can we find the bug ourselves? Have a tense or uncomfortable Sim listen to New Age music.
What happens when the bug occurs? Instead of the Focused "Chilled to New Age Music" mood and the soothing of negative moodlets they just get the "Great Tunes" moodlet.
What do you expect to see? I expect the New Age music to relieve negative moodlets.
Have you installed any customization with the game, e.g. Custom Content or Mods? Not now. I've removed them.
Did this issue appear after a specific patch or change you made to your system? Yes
Please describe the patch or change you made. Pre Tiny Living patch and Tiny Living

This is what I expect to see when my Sims listen to New Age music. Along with the alleviation of tense or uncomfortable moodlets. 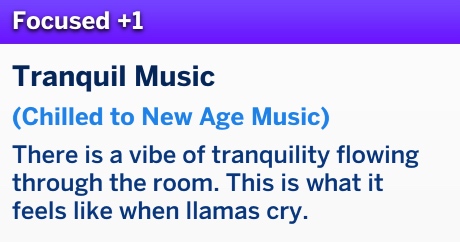 I've played through several households and only seem to get the "Great Tunes" moodlet.

New Age music has been working to relive stress and discomfort and give a focused moodlet since the release of Spa Day.

It has not always given the "Focused" moodlet (depends on the Fun level), but it has always worked to relax and relive negative moodlets. There are exceptions, like being eaten by a Cow Plant or attacked by a Vampire, but mostly it's just worked.

Adding: Tested in a new vanilla game. New Age music only gives the "Great Tunes" moodlet. Formally relived the "uncomfortable" moodlet from eating Fruitcake, but no longer does this.