Product: The Sims 4
Platform:PC
Which language are you playing the game in? English
How often does the bug occur? Every time (100%)
What is your current game version number? 1.47.51.1020
What expansions, game packs, and stuff packs do you have installed? Get Famous, Seasons, Get to Work, Cats and Dogs, City Living, Jungle Adventure, Dine Out, Spa Day, Vampires, Kids Room Stuff, Vintage Glamour Stuff
Steps: How can we find the bug ourselves? Have two Sims have high romantic relationship with each other, such as they would normally be able to use the bathroom facilities in the same room together with no issues. Have one Sim take a bath using one of the Soak options from Spa Day. (i.e. Lavender Foam Soak)
What happens when the bug occurs? The romantic interest will perform the "See What's Happening" interaction on the Sim taking a Soak, interrupting whatever else they're doing in the bathroom. (i.e. using the Toilet) Romantic interests have no issues with being in the same room as another Sim using the bath/shower/toilet normally, but will react when that person is taking a Soak, instead of a normal bath/shower.
What do you expect to see? The Sim shouldn't be appalled at witnessing their romantic interest taking a Soak.
Have you installed any customization with the game, e.g. Custom Content or Mods? Never used.
Did this issue appear after a specific patch or change you made to your system? Neutral/Not Sure

So the issue is that two Sims in a romantic relationship, who normally don't care if the other is taking a bath or whatever will trigger a "See What's Happening" interaction and act appalled if they walk in on the other taking one of the bathtub Soaks from Spa Day. 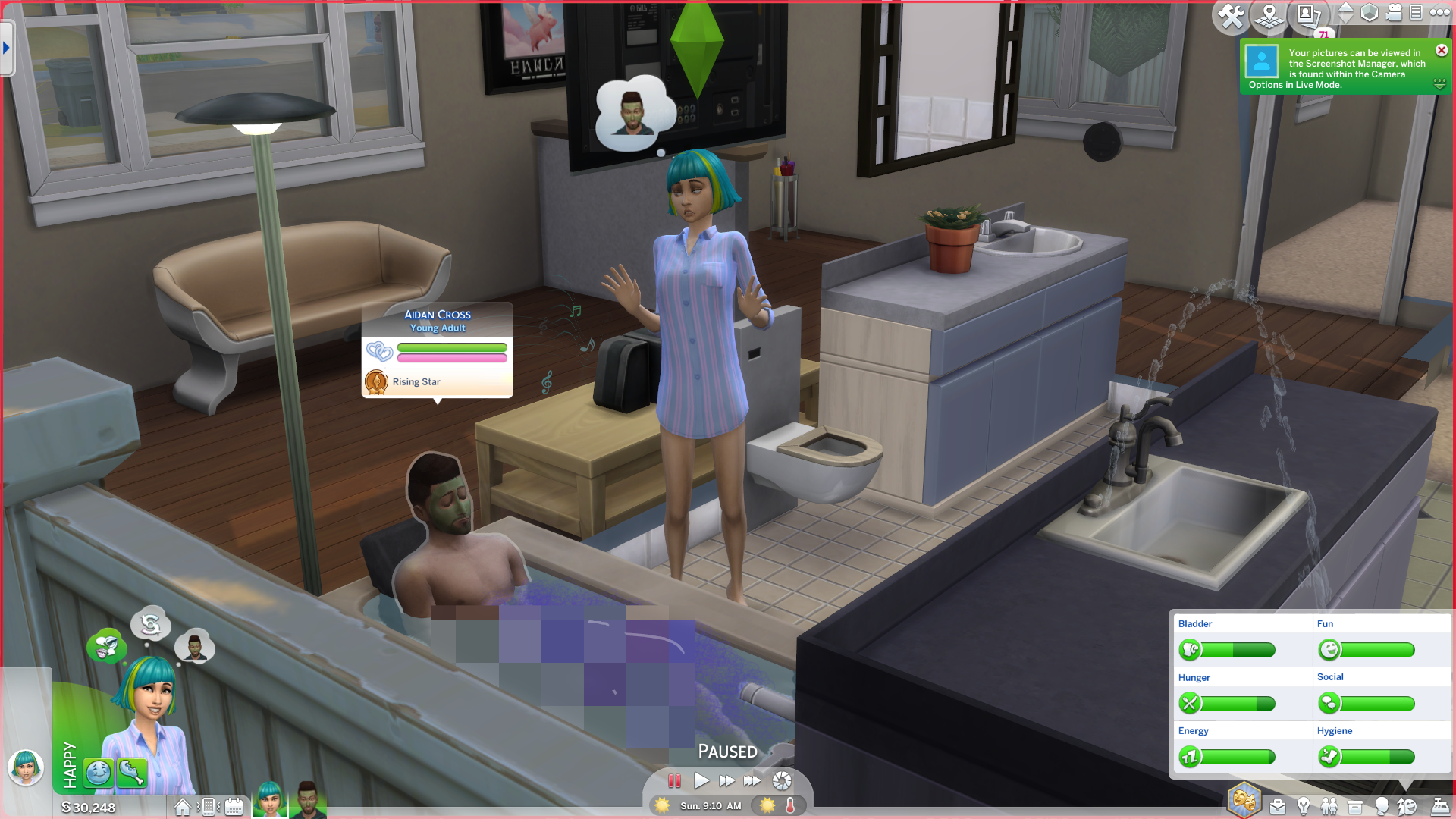 In the picture above, you can see Venessa Jeong reacting in surprise at walking in on her boyfriend taking a Lavender Foam Soak. She had previously been sitting on the toilet, but got up before finishing (note the half-full Bladder need) to act shocked at seeing her boyfriend in the tub.

Considering that Sims with a high romantic relationship can normally use the facilities in the same room without shooing the other out beforehand, this doesn't seem intended.

Re: [OPEN] [SD] See What's Happening When Romantic Interest Walks In On Soak