a month ago - last edited 3 weeks ago by

Product: The Sims 4
Platform:PC
Which language are you playing the game in? English
How often does the bug occur? Every time (100%)
What is your current game version number? 1.61.15.1020
What expansions, game packs, and stuff packs do you have installed? Cool Kitchen Stuff
Steps: How can we find the bug ourselves? Build an enclosed room. Then, place a floor that has a round edge made using the medium or large rounded deck tool inside the room on the ground floor, or using any of the sizes on a higher floor.
What happens when the bug occurs? The grid squares along edge of the rounded floor are dark, as if there were no indoor lighting. If a piece of the wall is removed and then added back, they appear lighter, but are still too dark. They appear fully dark again when the lot is re-entered.
What do you expect to see? The edge of the rounded floor should be lit the same amount as the rest of the floor.
Have you installed any customization with the game, e.g. Custom Content or Mods? Not now. I've removed them.
Did this issue appear after a specific patch or change you made to your system? No 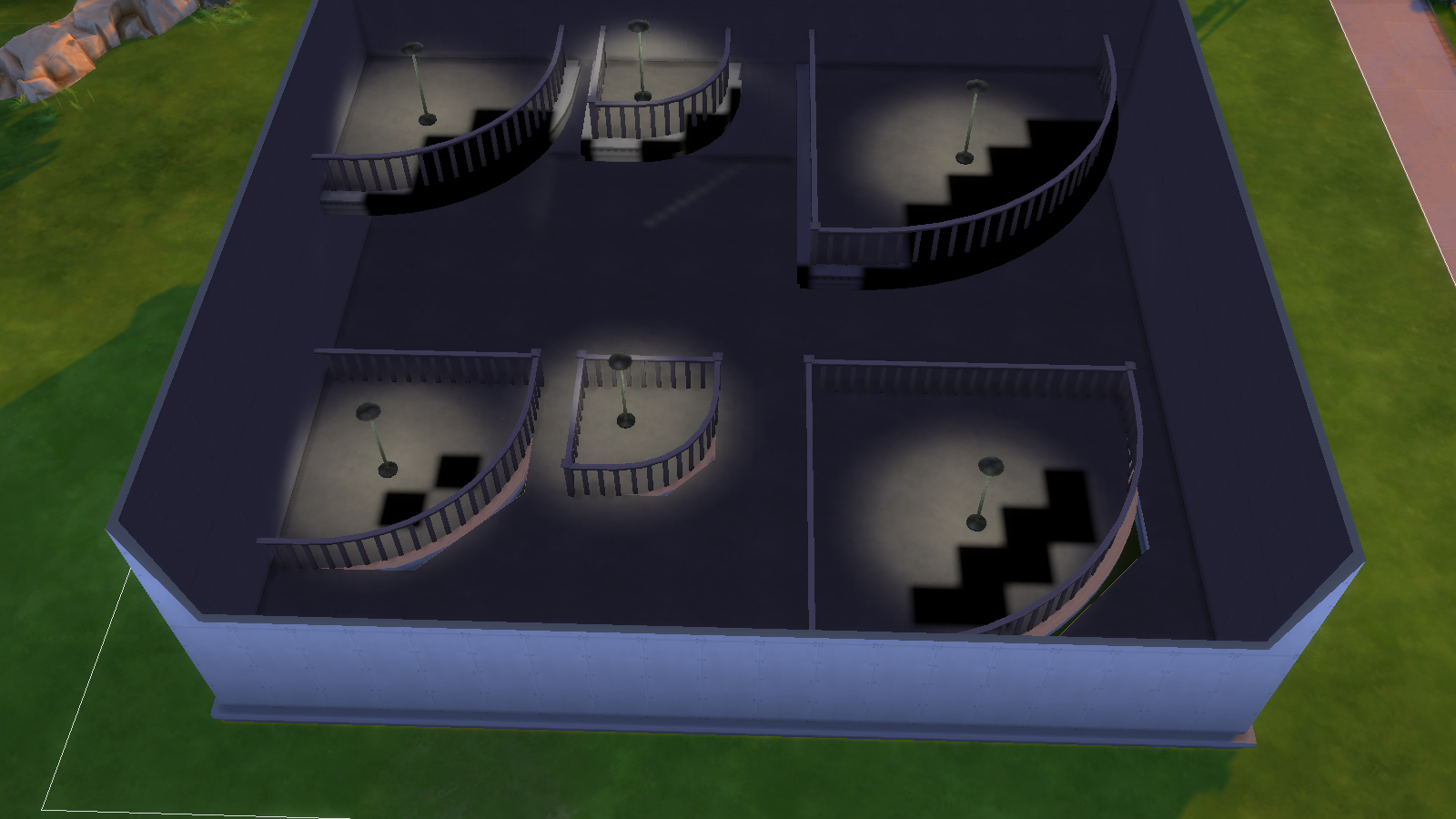 1. The issue upon loading up the lot. The decks on the top of the image are on the second floor, while those on the bottom are on the first floor. As you can see, the lighting issue is different in these two cases, because on the ground floor, grid tiles that partially lie off the edge of the rounded floor are lit correctly. This completely eliminates the issue for the small rounded deck on the ground floor, because all of its affected tiles are partially off the edge. 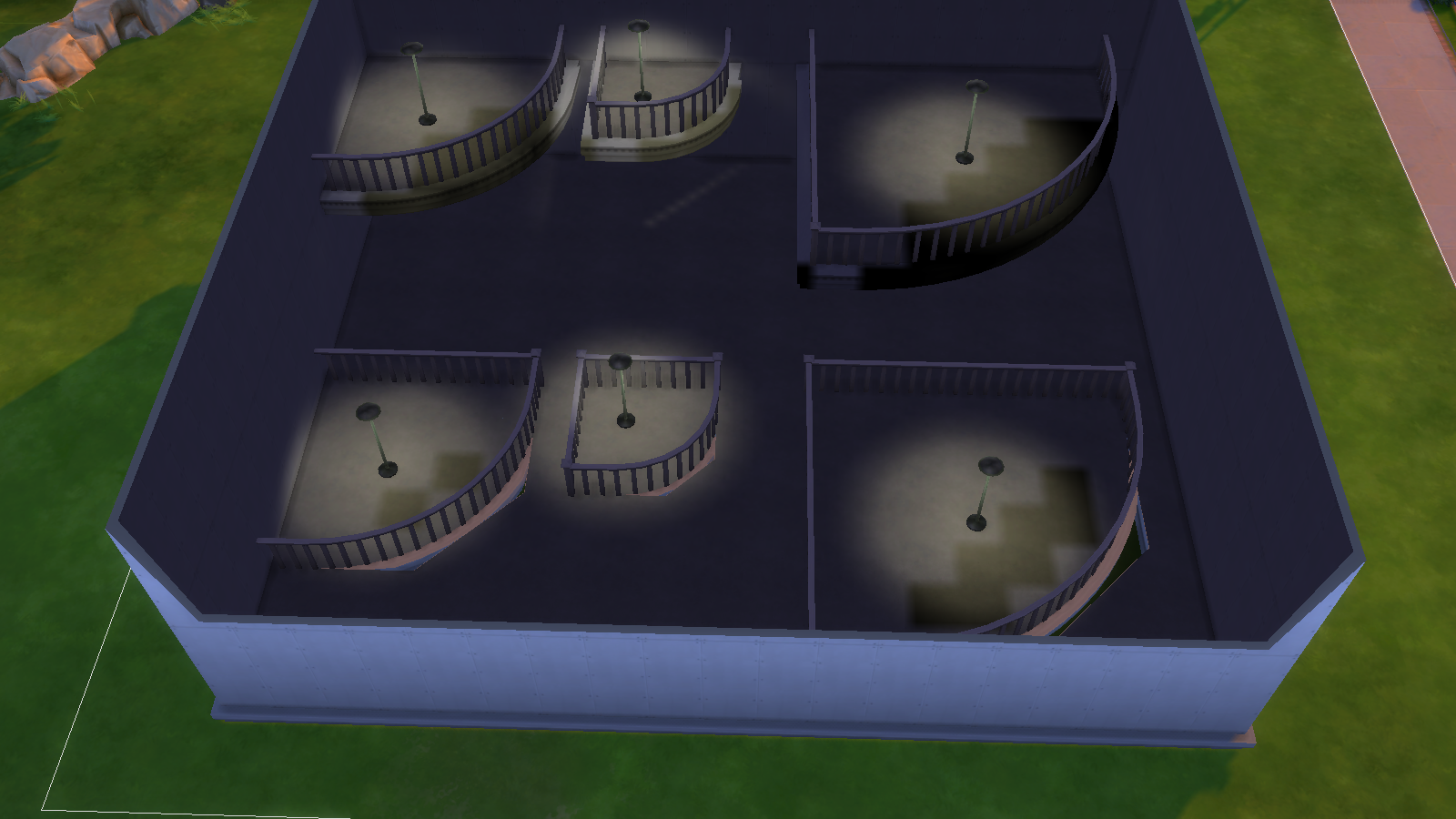 2. The issue after destroying a wall section and then hitting the undo button. The strange shadows are less dark, but still present. They return to their appearance as in 1 upon re-entering the lot.

I can't repro this, am I testing it right do you think? I would expect that hole in the floor because of the different shaped floors. 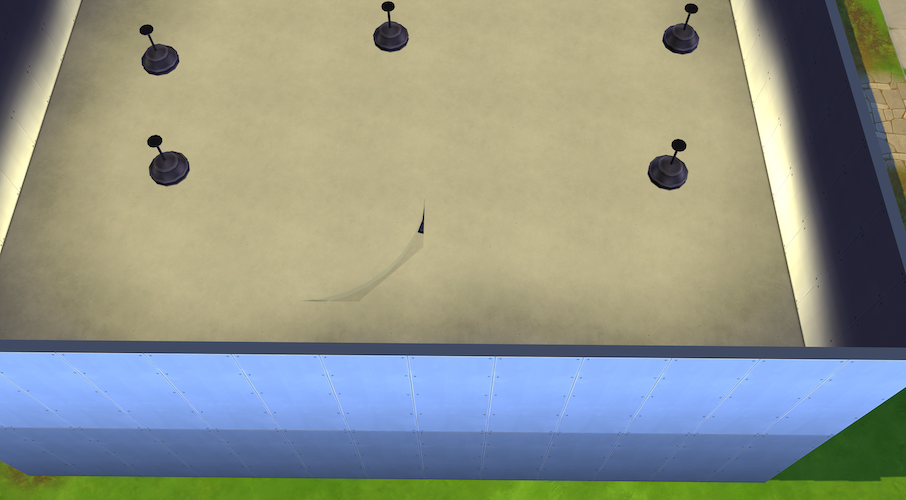 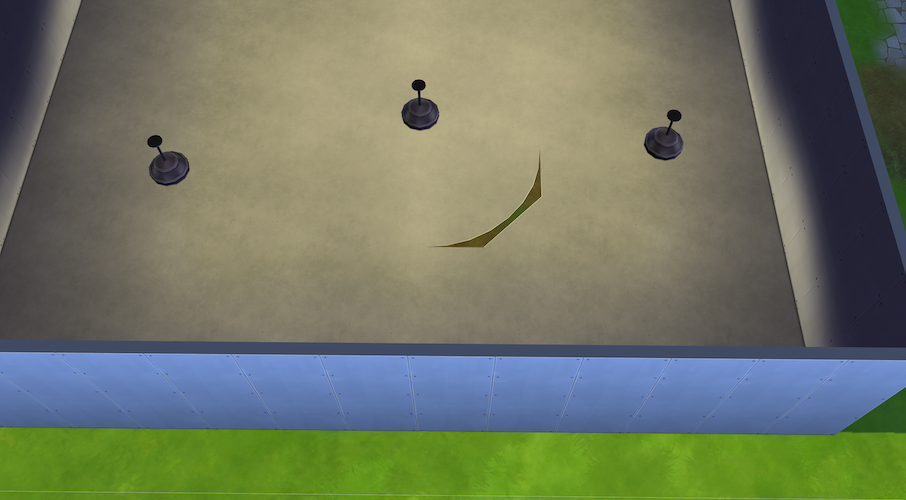 Could you post a screenshot of your in-game graphics options? Which graphics card does your computer have?

I don't quite get the extreme pattern that you got, but in this lot I built that had a rounded deck section as an upper floor indoor balcony, I got a black square of incorrect shadow or lighting on the rounded section. Which is why I haven't ever built rounded stuff ever since - that lot was built years ago and I first noticed that black section years ago. So this isn't a new bug, it's an issue that has been around for years. 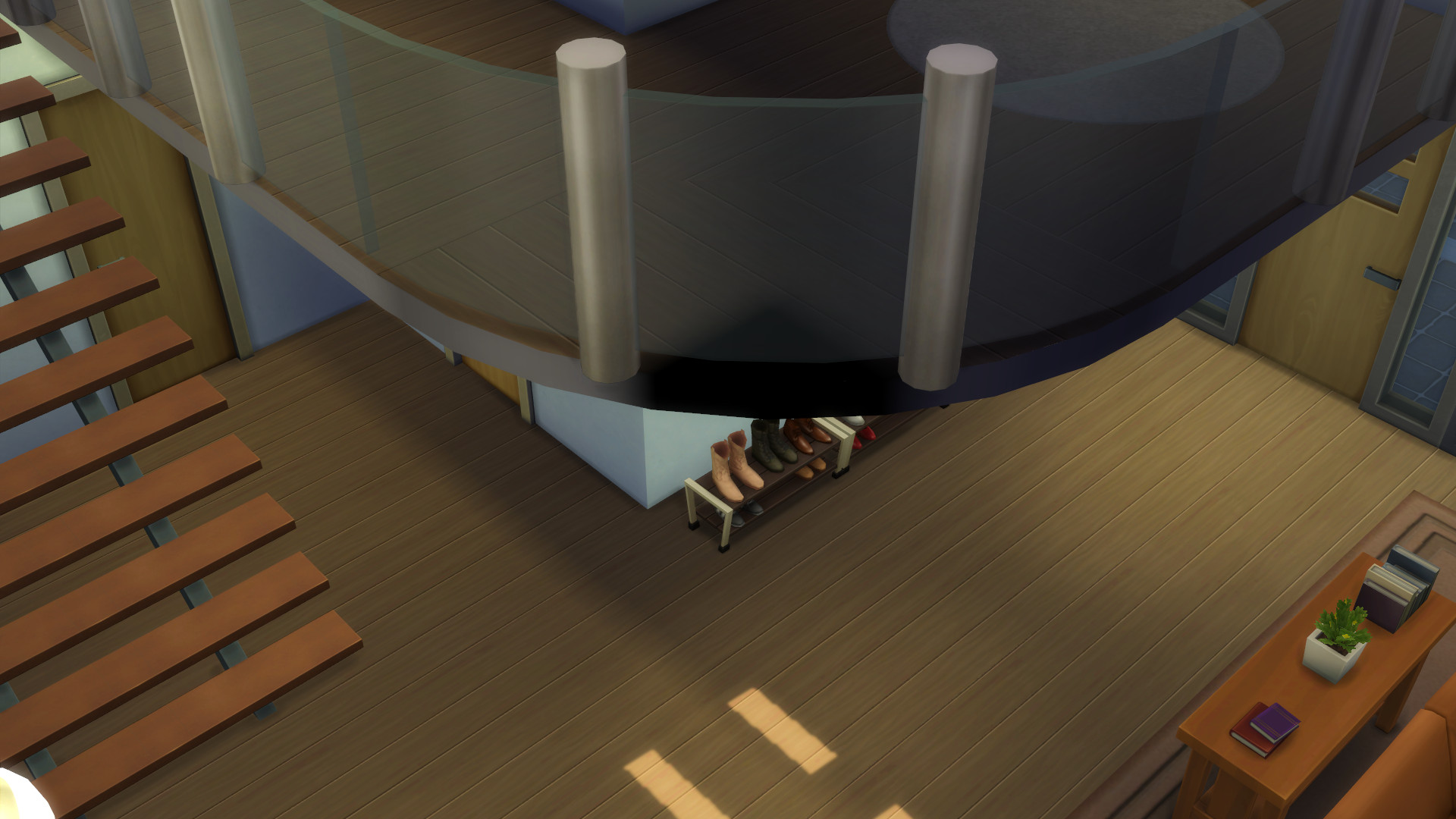 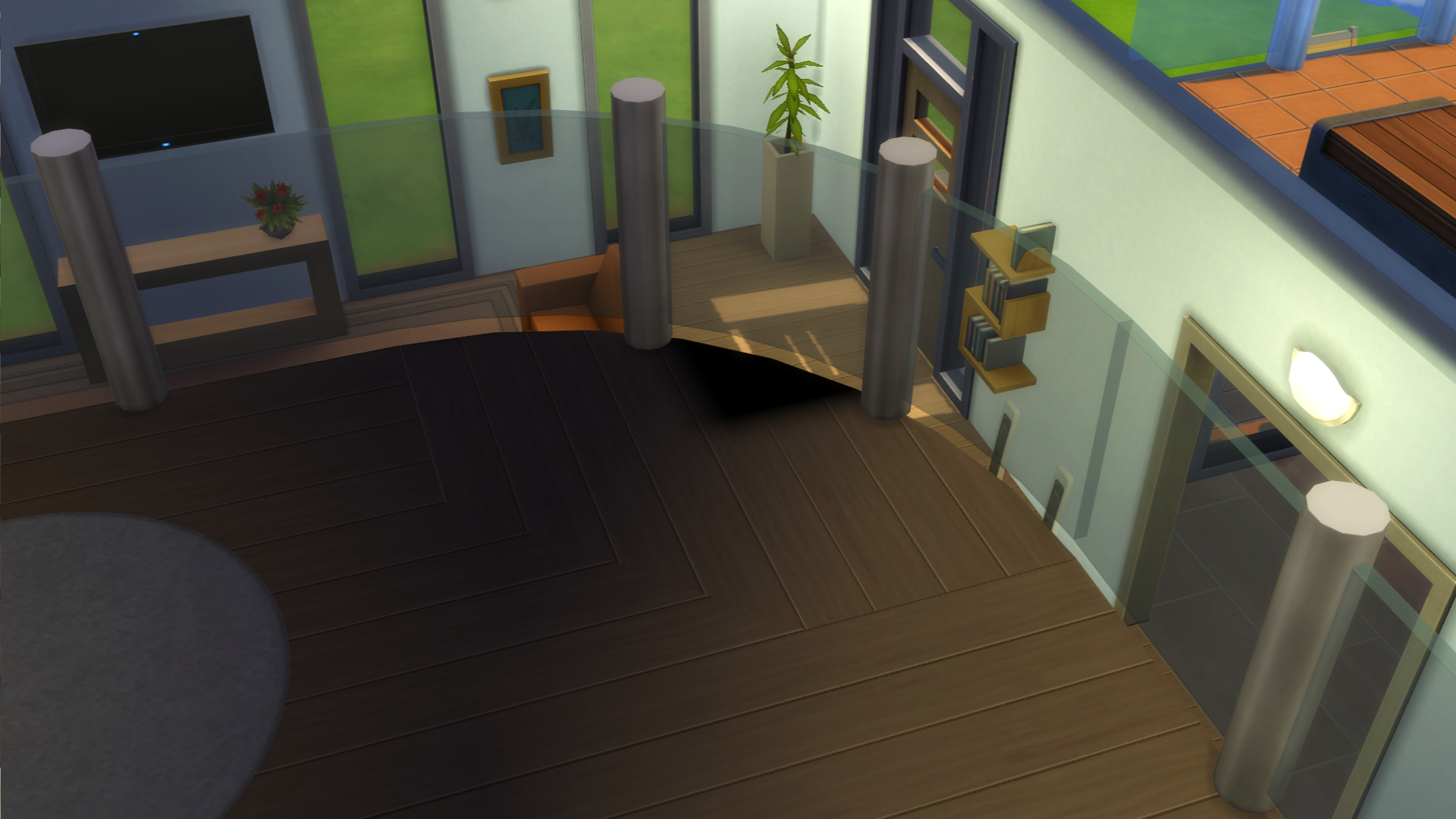 That's very strange. Is that the small-sized piece? Because I have tested some more and found that the pattern is dependant on whether there is a floor adjacent to the rounded edge, not on what level it is on. However, the ground also counts as a floor so decks placed on the ground floor will still always show the "ground floor" pattern regardless of if you have built a floor in that room or not. This image is a medium piece on level 2, with the floor adjacent to it (and it has the "ground-floor" pattern): 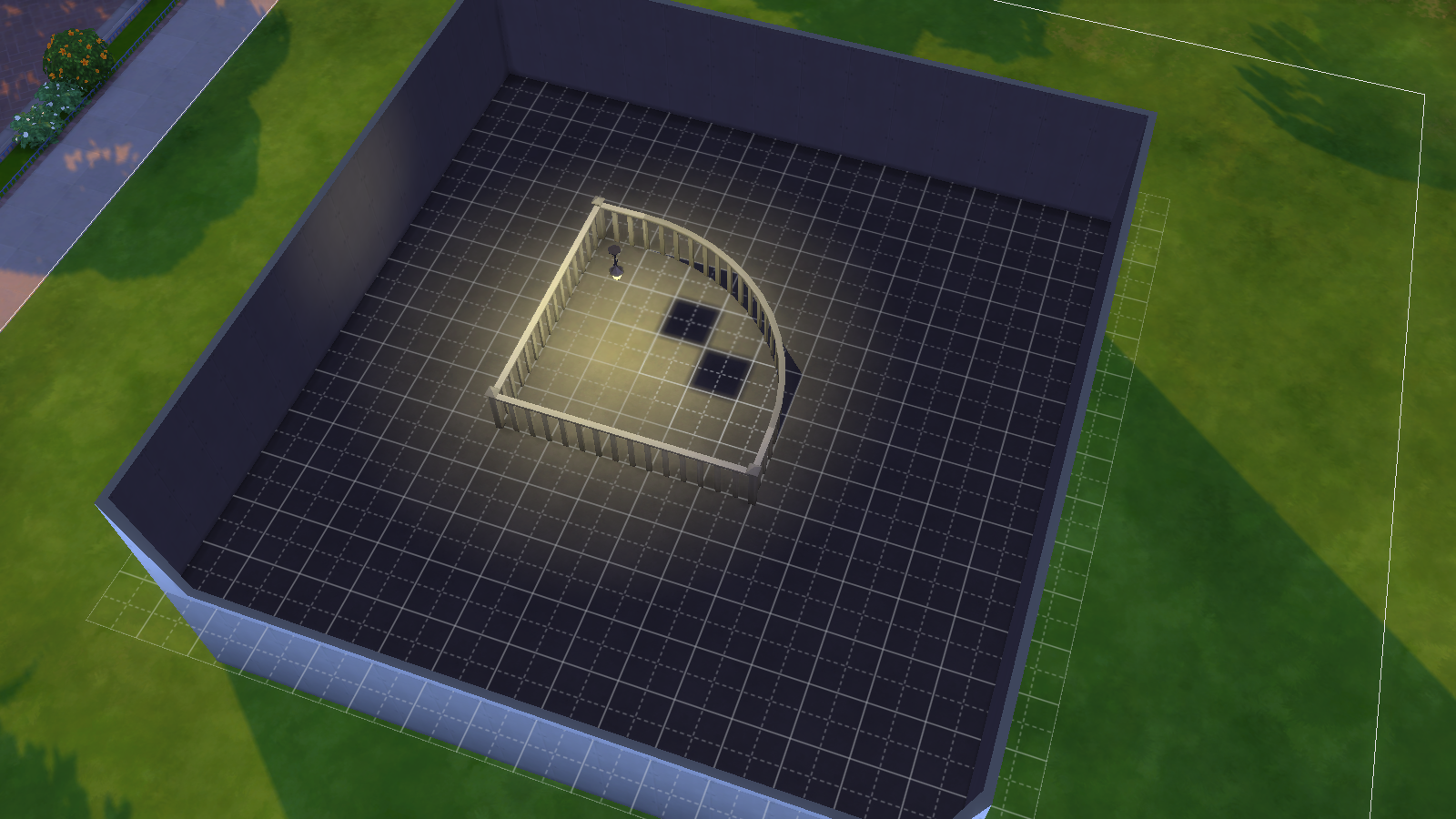 This one is on the 2nd floor, but without the floor adjacent to it and has the pattern I thought was for "higher floors." 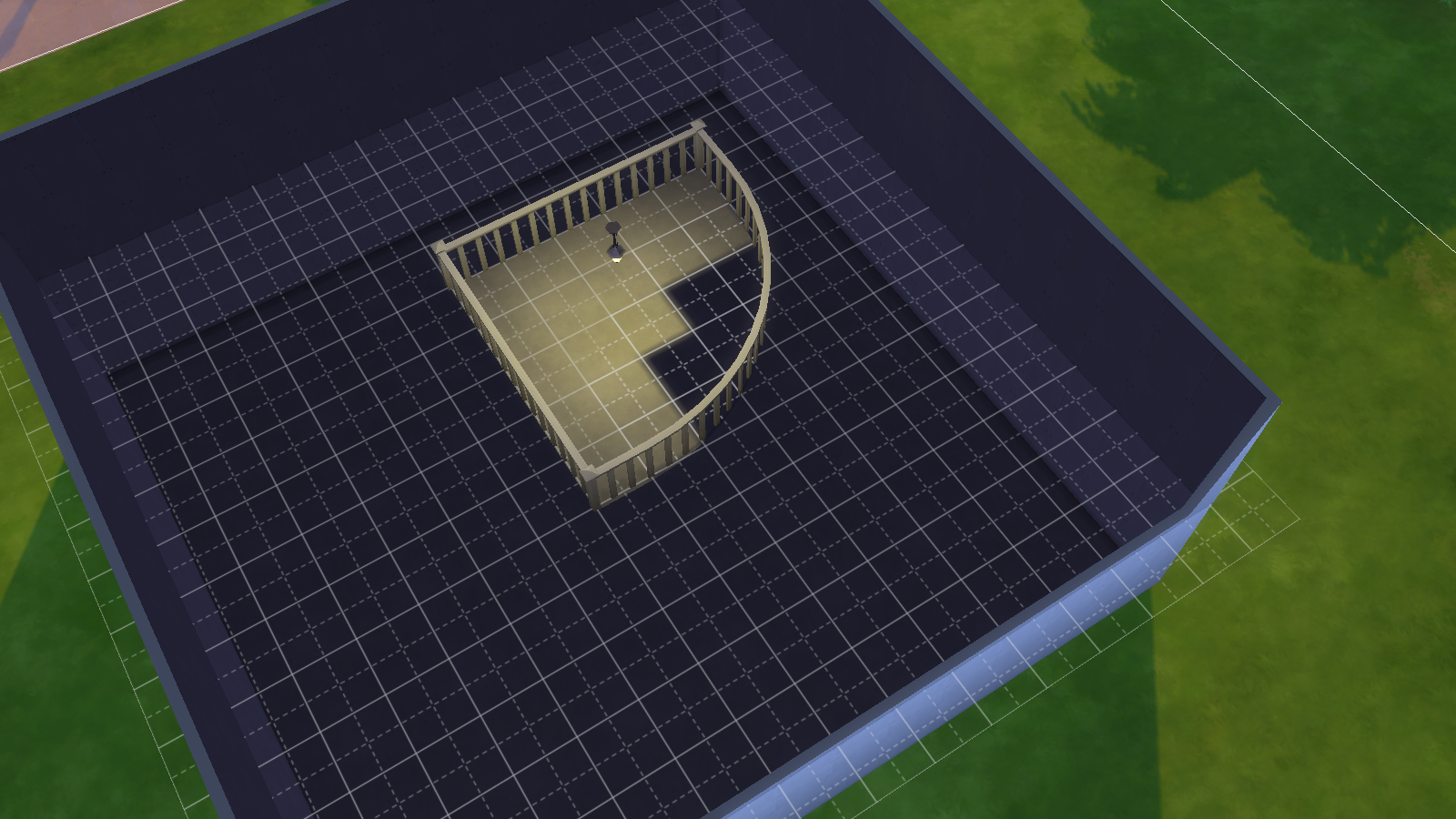 And here are my graphics settings, in case: 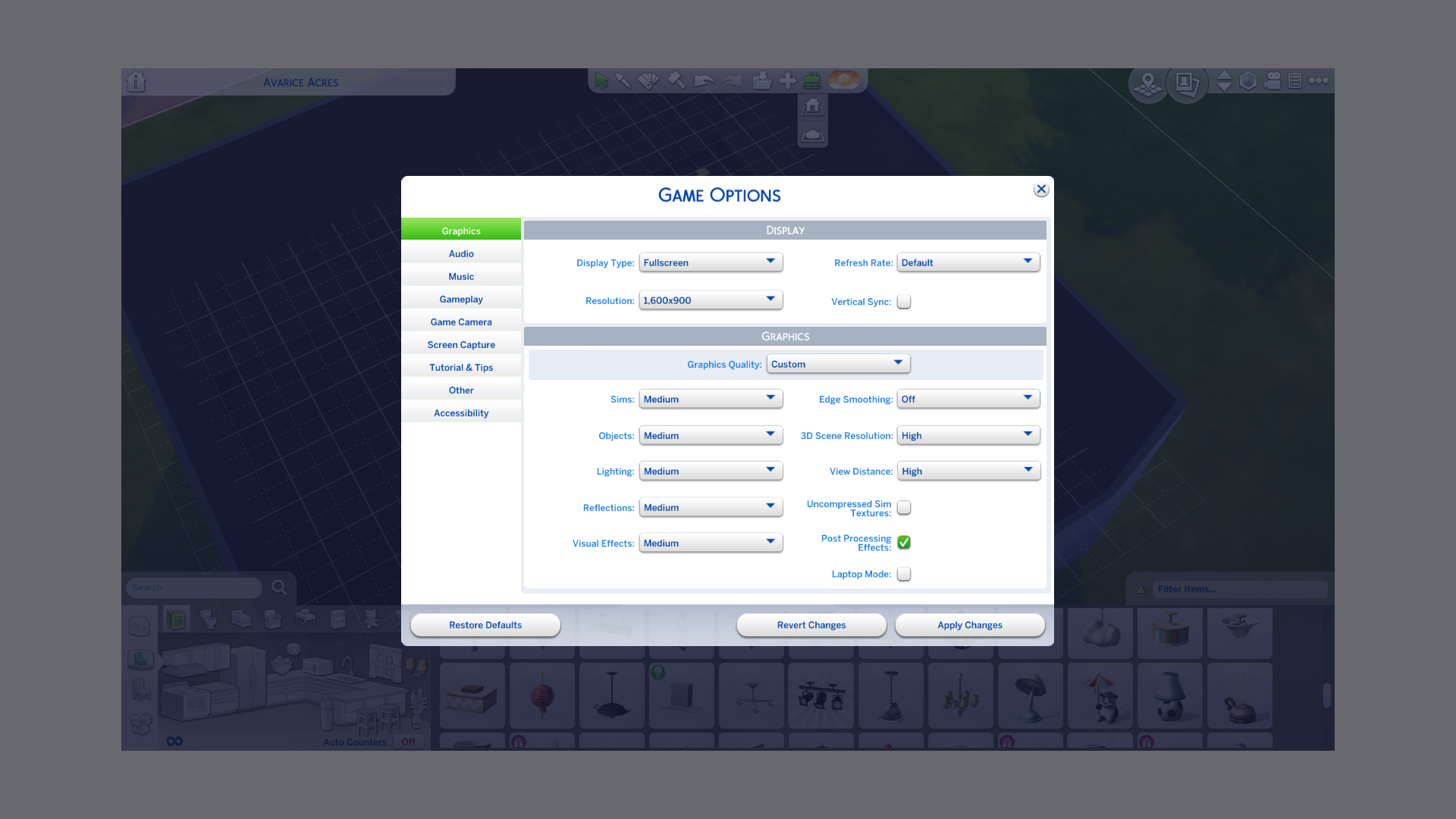 But I think that maybe it is just that the small piece adjacent to a floor shows no dark spot.

Thank you. I suppose I just noticed it.

Thanks for more info

After Simvasion's post I managed to repro their result in my game too. If you up your graphics options, specifically the lighting setting, do you get the same result?

Unfortunately, I do get the same result. Here are some screenshots with lighting set to "very high." I think it does make the appearance after deleting a wall and undoing even lighter than with the medium setting, so that the dark spot is less visible. However, you would have to do that every time you loaded a lot. 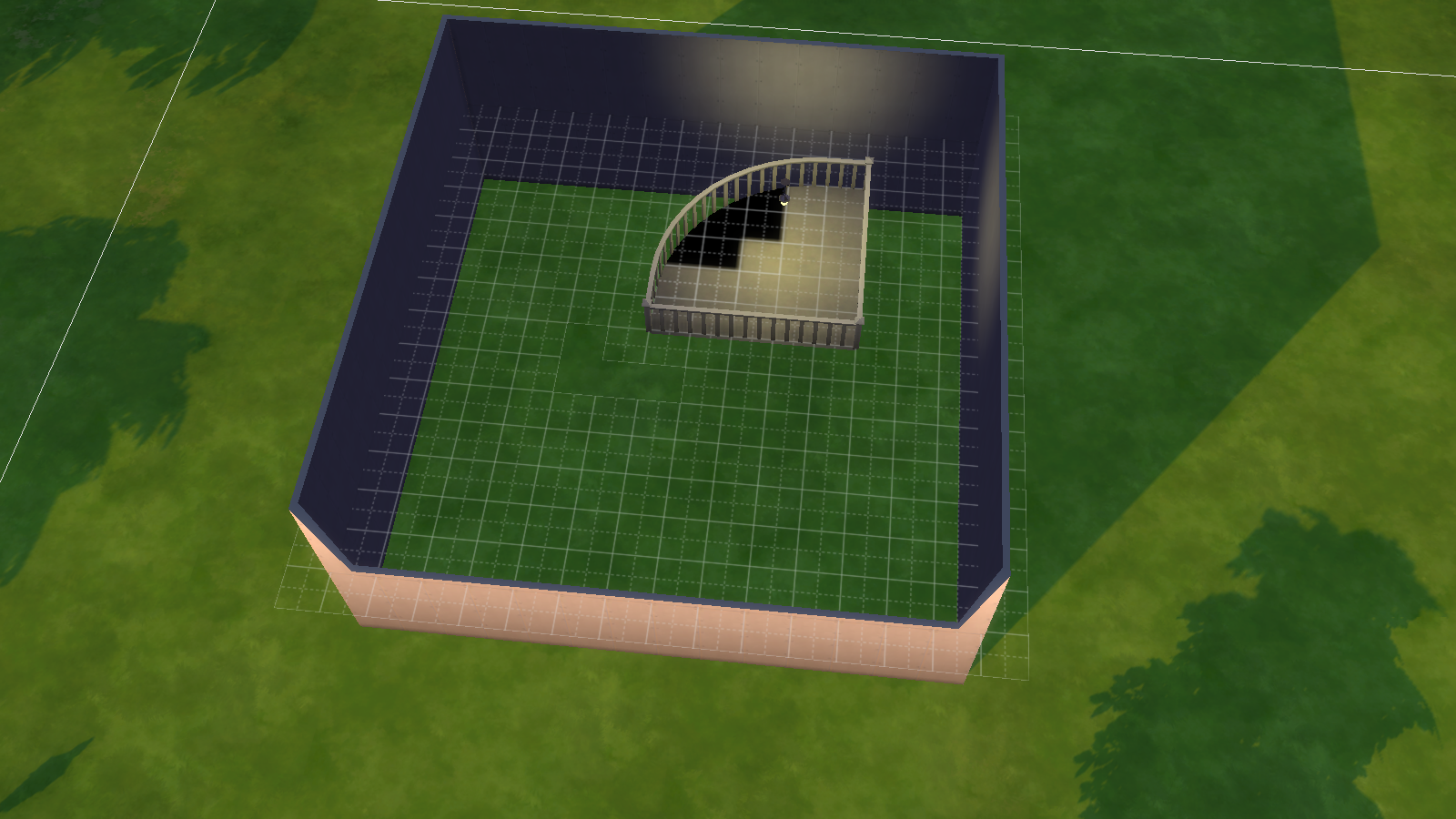 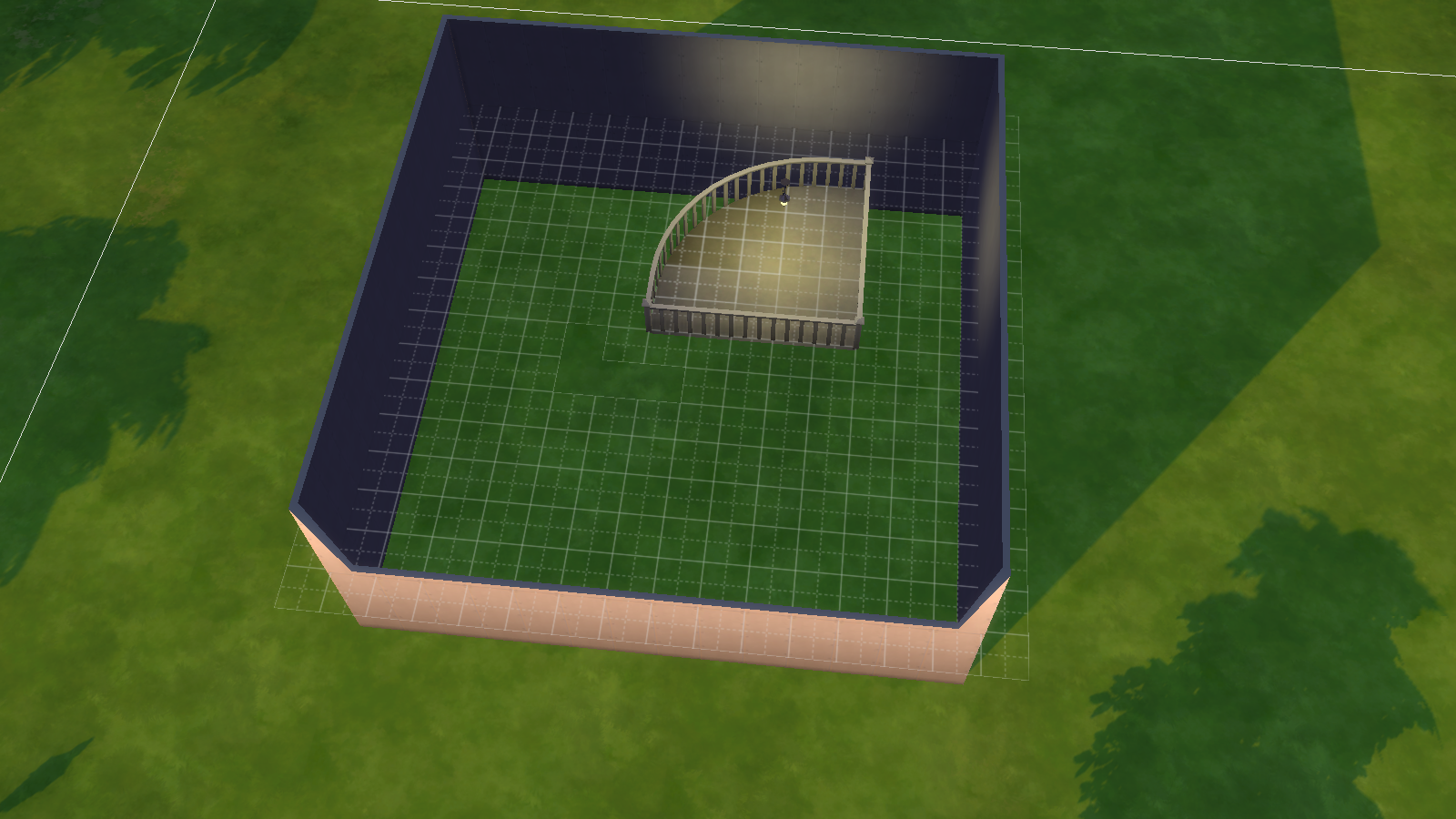