Product: The Sims 4
Platform:PC
Which language are you playing the game in? English
How often does the bug occur? Every time (100%)
What is your current game version number? 1.48.94.1020
What expansions, game packs, and stuff packs do you have installed? All
Steps: How can we find the bug ourselves? Have 3 or more Sims with romantic interests in each other together (with all having the Player Trait).
What happens when the bug occurs? The Sim or Sims witnessing a romantic interaction lose Reputation.
What do you expect to see? I expect No Loss of Reputation from those witnessing a romantic interaction at all.
Have you installed any customization with the game, e.g. Custom Content or Mods? Not now. I've removed them.
Did this issue appear after a specific patch or change you made to your system? Yes
Please describe the patch or change you made. Get Famous.

This occurs with my Vampire Sim and Non-Vampire Sim.  It's most likely related to other Player Trait issues that haven't been resolved.

Added this as needs input to get more voices.

There are a couple things the Player trait doesn't save you from, namely First Kiss and being walked-in on during WooHoo. Also sims with the Jealous trait will still react regardless of you having the Player trait.
Message 4 of 8 (372 Views)
Reply
1
Highlighted

I would use this only for the Reputation.

I didn't have room to add the GF to the title

I have seen something similar but not the same in my game, 1 of my Sims keeps losing reputation for cheating on her partner but she has the player trait and no partner not even a romantic interest.

In my case the message is incorrect or its being delivered to the wrong Sim. For me it started after my Sim went to the celebrity awards she was sat next to Thorne Bailey his wife was sat the other side. My Sim and Thorne where chatting and then he flirted with her, at first his wife did not react but she did after the second flirt. At first i had no reputation issues but since then my Sim gets texts from friends and acquaintances, about cheating on her partner and each time it comes with a reputation loss. Reputation dropped from pristine to good after the first 3 texts.

The text would be perfect if it was delivered to Thorne but the wording makes no sense for my Sim. If she is being punished for having a married Sim flirt with her, the text message received needs to be changed.

I have the same problem on my Xbox One Sims 4. I have 1 guy and 2 women living in a house together. My guy is soulmates with both women, the women are best friend with each other, none of them have the jealous trait, and all have the player trait. Every time my guy (Passionately)Kisses(not Hands or Cheek) one of them and the other is watching, then the one(doesn't matter which) witnessing has a little red face with horns and a negative sign appear over her head and loses reputation. And yet she will still cheer my guy and the other girl on. I think that this should be fixed so that: A) that should happen only to the Sim that the player is on; and B) that should only happen when the player trait has not been acquired. Because, surely there is a limit to how much Mentoring a Sim can do on an NPC Sim before the latter reaches max level of "That Skill" and can't be Mentored anymore. 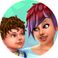 I have the same issue - three Sims with the Player trait are romantically involved with each other, high levels of friendship and romance, and each time a romantic interaction between two of the Sims is witnessed by the Sim being excluded, the Sim loses reputation.

There is no loss of reputation if the witnessing Sim only has a romantic relationship with one of the two Sims who are romancing.

I don’t suppose anyone has a solution (like a cheat or a mod) to prevent the reputation loss? The solution to the other Player trait problem (the relationship being broken for poly situations) is giving everyone involved the Player trait, but I’m not sure what we can do to address this in particular... Freeze reputation maybe?