@crinrict Have sent PM with the link, hope I did it right.

@Compulsivian I tested your save and was able to duplicate the issue but ONLY if I stayed late.

She returned from work fine when I didn't. Did you always make her stay late ?

- There's LastExceptions throwing when you stay late which confirms my theory that an error is interrupting the process of the Sims going home from work properly.
- One is about work events and the other was about the promotion the Sim got

So, question to you: When you didn't get the issue did you

Also about the work clothing: That's probably this issue as your Sim is a mermaid: https://answers.ea.com/t5/Bug-Reports/NEEDS-INPUT-IL-Workout-reverts-to-everyday-for-mermaids/m-p/80...

@crinrict You make Excellent questions! - But They're hard to Answer!

I do know, both times I stayed late, and It was about promotion time.

The first time, I wasn't really that vigilant, There were small issues, like my Sim showing up in SummerClothing at work, and not changing into Work Clothes..

- But hey, I've played alle the Sims Games over the Years, and used to peculiar, small glitches in the Matrix.

- First time, however, She got the promotion AT work. It's been a long while, since I played Active careers, and didn't remember, if it's was normal or Otherwise. - Then I misdiagnosed/stayed late to get Her Work Scores a bit up again, as I remember.

Can't remember, anymore, if I had a Work Event that day, i didn't pay to much attention as said, didn't expect the Outcome of the Workday..

I was at level 9 Going on level 10 (And got the level 10). Drop in Patients, who need Emergency Surgery, is quite normal.

Second Time, I only stayed late in hope of the Promotion, but did have a drop in Surgery Patient.

The sure thing is both Times: Stay Late Happened.

Second: Stay Late,  to GET a Promotion.

I'm not sure anymore.. The Second incident had a drop by Patient, but the first, I can't remember.

The Clothes Problem Bug sounds Similar, Yes, but it's Random Clothes, not former Work Attire. The Solo Outfit on ScreenShot resembles what She Wore, and isn't what She usually wear at Home, as shown, in the other ScreenShot. 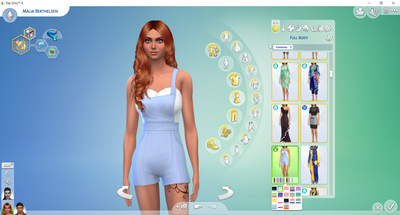 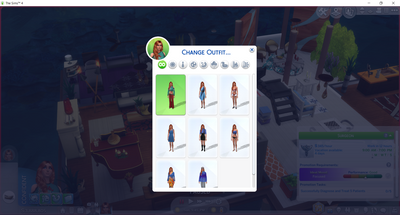 @Compulsivian Could you try if it occurs if you don't stay late on the backup you sent me ?

Lately I have had a problem with my scientist sim. If I want him to stay late and work more, he will not go home after work. I have tried to repair game but it didn't help, and I have no script mods. does anybody else have the same issue?

@simsister, You do not have any script Mods, but do you have any kind of Mods or CC?

Even if script Mods are more likely to cause problems, other Mods and even CC can also cause problems in the game when they are outdated.  Mods and CC can become outdated anytime EA releases a patch to the game, like we just had recently.

If you use any Mods or CC, please do the following:

1) Move the Mods Folder to your desktop

3) Fix you game in Origin by logging in and go to Library, then right-click on The Sims 4 and choose the "Repair Game" option from the list.  Wait until Origin finishes repairing all your packs and not just the base game.

4) Now, when you turn on your game again, it will create a new mods folder that will be empty.  Check to see if your game is now working without mods/CC.

5) Now you can try adding back items from your Mods folder one at a time checking your game each time to see which item is causing your game to not work properly.  If you have a lot of items, you can try the 50/50 Method.

This will either show which Mod/CC item is causing the problems or it will rule them out as the cause.  If one of your Mods/CC is found to be the cause of your problem, you will need to stop using it and replace it with an updated version, if there is one.  It should be updated after the most recent patch to the game.

If this doesn't' work or if you don't use any Mods/CC then your problem could be caused by something else, but we need to rule out any Mod/CC conflict first.
Please update us on if this works or not!

@simsister  I've run into this a couple of times.  So, what I assume is happening is the game is not automatically sending the sim home whenever the extra time you added to the end of the shift expires.  Is that correct?  The game seems to think that the work time has not expired for some reason.   Happens in other GTW careers too once in a while.  Also occasionally happens with the regular careers under certain circumstances (save, exit and rerestart).

Did you save and exit the game while the sim was at the lab before his shift ended?  This is when it has happened to me.  When I next loaded the game, the sim would get stuck at work at the end of the shift.  Doesn't seem to happen if you save and exit to the Main Menu and then reload without shutting the game down completely.

Have you tried sending the sim home by right clicking on his portrait at the bottom?  You might have to leave work early in that case.

If the sim is in a household with more than one sim, have you tried changing which sim you are playing via the option on the other sims portrait?  If you can change sims and get to the home lot, you can call him home but you usually have to use the leave work early option.  If that doesn't work, you can have the 2nd sim travel to another location and try again from there too.

@crinrict I sure will try. Can't promise it will be before the Weekend, though, am a bit busy these couple of days. But I'll look into it! Thanks for all Your help so far!

@simsister I merged your post with a bug report on this.

Could you please also send me your save game ?

Upload to google drive or one drive and PM me the link.

I sure wish I could read the last exceptions for the Get To Work Doctor.  The last exception is more likely GTW can't create pregnant sims for the level 8 promotion go to deliver 2 babies on  Baby Emergency Day.

Before the toddlers update Get To Work randomly picked sims to be pregnant for the requirement of the level 8 promotion, however a lot of people complained because townies would be created pregnant using the Get To Work Cheat, but it was simulated in GTW which meant that townies would appear pregnant, they would come in have their kids and the baby would disappear.

However, there appeared to be a problem with that as some simmers complained that when they went to the hospital, they would have the baby and the baby would vanish, this usually happened because someone in the same household was sent to the hospital alone only to show up during the pregnancy, because the sim never left work the game would think the pregnant sim was part of the work simulation which they went through the process of having the baby and it just disappeared no name came up or anything.  Now Sims are stuck at the lot in the surgery chair because game is waiting on a baby that is not there.  Eventually the game would crash and once you loaded by in you could leave the hospital but the baby was gone.

So to correct that problem they made the pregnancies with Get To Work real, so that babies will still be born in a hospital even if someone in the household is working there.  Sometimes if there is too many sims, GTW sometimes forgets to create pregnant sims or employees to satisfy the games active requirements.  To get around that create sims and place them in GTW Career of your choose and put them under other households, this will allow the game to level them up using cheats, so all conditions can be met.  I hope that helps.

I hope they fix GTW active careers to work better with the toddler update, because since they go from baby to toddlers the GTW Doctor career has less patience than it should while it waits for the toddlers to grow up to kids.