April - last edited a month ago by

Product: The Sims 4
Platform:PC
Which language are you playing the game in? Svenska
How often does the bug occur? Every time (100%)
What is your current game version number? 1.62.67.1020
What expansions, game packs, and stuff packs do you have installed? All expansion packs, Dine Out, Vampires, Parenthood, Jungle Adventures, Strangerville, Realm of Magic, Luxury Party Stuff, Kids Room Stuff, Holiday Celebration Pack, Grim's Ghoulish Guitar.
Steps: How can we find the bug ourselves? Look for the shoes in the pictures below.
What happens when the bug occurs? For female sims the shoes are in the flats category ("lågskor" in the picture). For male sims the shoes are in the loafers category. Female and male sims have the same number of swatches, but the swatches are different and also placed differently. For female sims there are swatches for yellow and pink, which male sims don't have. For male sims there are swatches for light brown and beige, which female sims don't have.
What do you expect to see? That the shoes are in the same category for male and female sims, and that the shoes have the same palette for female and male sims. Also, the swatches should be in the same order for male and female sims.
Have you installed any customization with the game, e.g. Custom Content or Mods? Never used.
Did this issue appear after a specific patch or change you made to your system? No 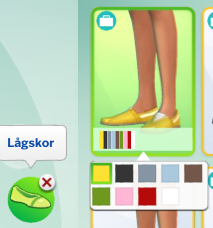 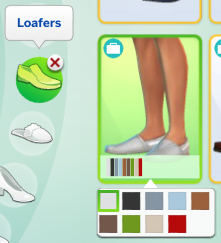