a month ago - last edited 3 weeks ago

Product: The Sims 4
Platform:PC
Which language are you playing the game in? Deutsch
How often does the bug occur? Every time (100%)
What is your current game version number? 1.62.67.1020
What expansions, game packs, and stuff packs do you have installed? Computer System: Windows 10 professional 64 bit. Playing TS4 64 bit. TS4 Games installed: The Sims 4 Base: Digital Deluxe, Game Packs 7: 1.Outdoor Retreat Game Pack, 2.Spa Day Game Pack, 3.Dine Out Game Pack, 4.Vampires Game Pack, 5.Parenthood Game Pack, 6.Jungle Adventure Game Pack 7.Stranger-Ville Expansion Packs 7: 1.Get to Work Expansion Pack, 2.Get Together Expansion Pack, 3.City-Living Expansion Pack, (currently not installed because of unwanted Bugs and game behavior) 4.Cats and Dogs Expansion Pack, 5.Seasons Expansion Pack 6.Island-Living Expansion Pack 7.Discover University Expansion Pack Stuff Packs 13: 1.Luxury Party Stuff, 2.Perfect Patio Stuff, 3.Cool Kitchen Stuff Pack, 4.Spooky Stuff Pack, 5.Movie Hangout Stuff Pack, 6.Romantic Garden Stuff Pack, 7.Backyard Stuff Pack, 8.Vintage Glamour Stuff Pack, 9.Fitness Stuff Pack, 10.Toddler Stuff Pack 11.Laundry Day Stuff 12.My First Pet Stuff Pack 13.Tiny-Livng Stuff Pack, Free Packs: Holiday Celebration Pack Grim’s Ghoulish Guitar
Steps: How can we find the bug ourselves? Edit a lot that's alredy uploaded in your library, edit it and upload it again when restarting your game.
What happens when the bug occurs? Saved/uploaded Lots are no longer recognized as already saved up in the library if you edit them and want to save the changes by overriding the existing lot in the library.
What do you expect to see? I want the game to recognize again already uploaded lots in my library, so I don't have to make a complete new upload again to avoid doubles.
Have you installed any customization with the game, e.g. Custom Content or Mods? Not now. I've removed them.
Did this issue appear after a specific patch or change you made to your system? Yes
Please describe the patch or change you made. Since the latest patch.

Uploaded, saved Lots are no longer recognized as already uploaded in your library if you edit and save/upload them again next day or by restarting the game.
Since the last patch, my library no longer registers lots that have already been saved and uploaded and does not overwrite them as before.

Before the game would always ask me if I want to overwrite already existing lots in my library after edits and re-uploads. Now I have to save/upload it again each time and delete the previously already uploaded lots to avoid duplicates in my library.

Does anyone else have this?

@crinrictno my issue has nothing to do with this linked thread. It's an issue with uploaded lots to my private library where I save all my created
Sims and lots. Nothing is shared, just saved up builds for later use in other worlds if I wish. Once saved/uploaded a lot, you were able to override these when you did new edits to an existing build like change furniture etc. and re-uploaded it. A message would pop up asking if you want to override the existing lot in the library. Now this overriding function doesn't work anymore and you have to upload the whole lot with the changes and delete the already saved one.

ETA: Once you you've made a new uploaded of the lot and again doing some changes while you're still on the same lot and save it again, then the message will come to ask you what you want to do since the template already exists in my library. But if you leave and come back, then you have to once again make a new upload because the game forgot it's already up. Before the game would remember your uploads, no matter if you leave and in what kind of build mode you are, not anymore though.

This is how the message looks. It's in German since I play my game in German. 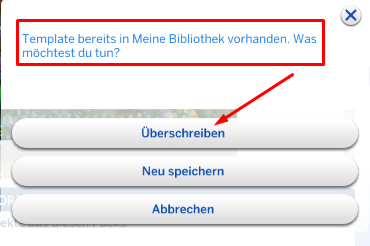 @LuvMySimz Might as well be connected to the other issue though as that also seems to forget what you have already shared/uploaded.

@crinrict Yes in this case that could sure be.
Message 5 of 5 (88 Views)
Reply
0
New topic