Product: The Sims 4
Platform:PC
Which language are you playing the game in? English
How often does the bug occur? Every time (100%)
What is your current game version number? 1.63.134.1020
What expansions, game packs, and stuff packs do you have installed? All expansions Eco-Living
Steps: How can we find the bug ourselves? 1) Go to your house Roof 2) Grab a 'Solar Panel - Roof' object (the one that angles with the roof) 3) Move the item onto your angled roof but don't place it 4) Without moving the solar panel from the roof, go to the catalogue and select a new item (eg a wedding arch or flower pot) 5) Bring the item out onto the roof
What happens when the bug occurs? The object in question becomes angled to the roofs angle, no matter where you place it. I have shared this to twitter as well to help showcase what I am seeing. https://twitter.com/AcademyTemporal/status/1269286938554454016
What do you expect to see? The object to be placed flat, not angled.
Have you installed any customization with the game, e.g. Custom Content or Mods? Never used.
Did this issue appear after a specific patch or change you made to your system? No 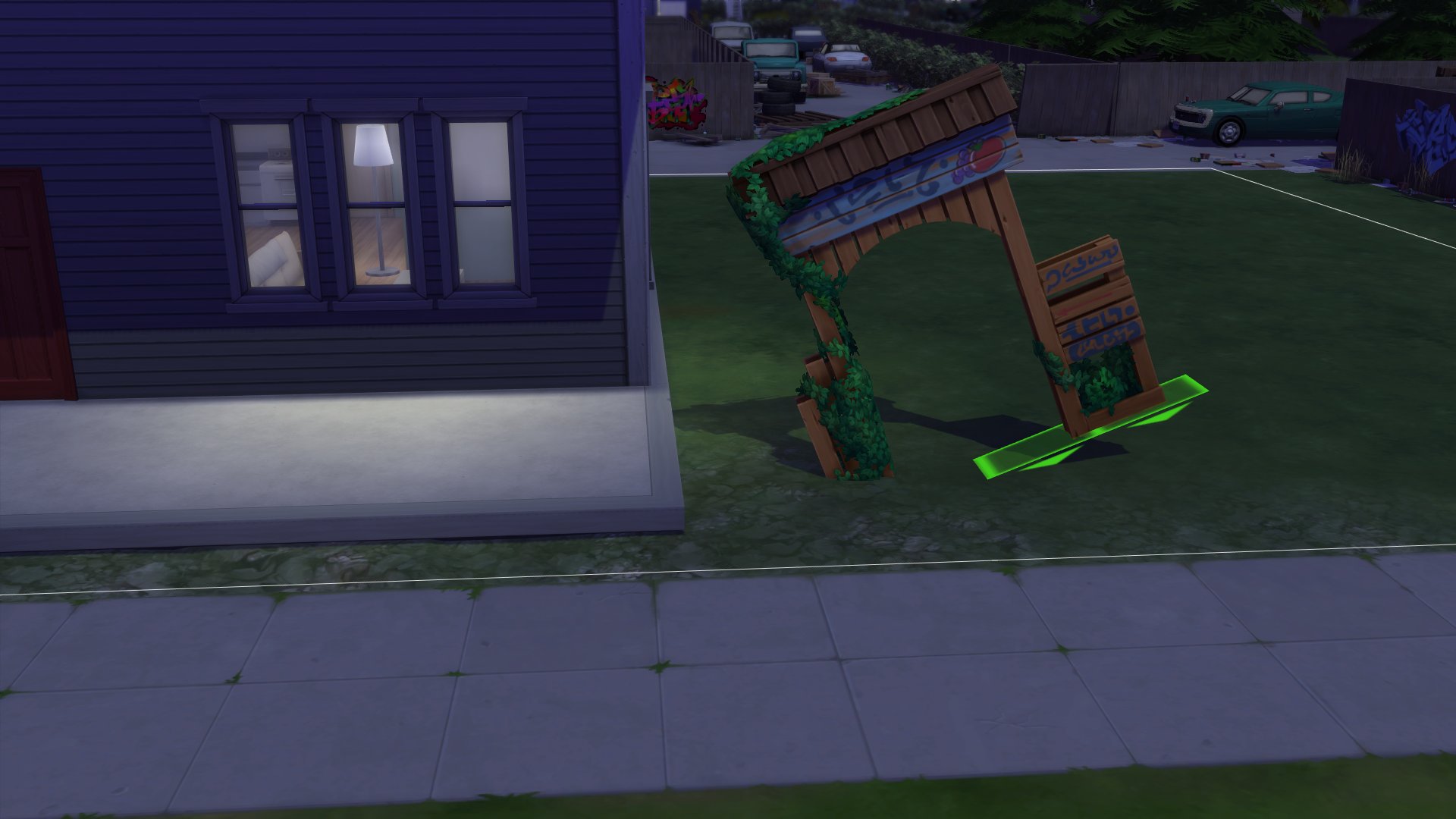 I have been able to reproduce this in my game.  But the circumstances have to be just right to make it happen.  Seems to depend a lot on the camera angle and direction you are trying it from.

In my case, it would only do it when I was at a low camera angle relative to the roof.  For the left side of the roof, it would only happen when coming in from the front of the lot and for the right side, it only did it when coming in from the back of the lot.  It did not happen every time I tried either, or even most of the time.  Maybe 1 in 5 attempts did I get the arches to rotate.   Also, if I had MOO on, it would not happen at all - the objects would not rotate.  So to get the arch you have shown in your pic with the green footprint to place on the ground, you must have turned MOO on after the arch turned while you were still holding it.  I could not place the objects I tried on the ground or on a floor at all with MOO off.

So, in a nutshell, this will happen but you almost have to make it happen.  Tbh, I don't see this as a bug per se.  It's just another quirk in the build system.  After all, it takes a very specific set of circumstances to make it happen.  And who knows, some people might like to be able to place an arch on their roofs.

@CGrant56Thanks for the response. At the time I hadn't used MOO yet and was able to place things on the ground with the exception of when it would collide with another object. After using MOO I could be more creative with it, but it was harder to activate. I've managed to use this on most objects I have selected with the obvious exception being rugs, though I haven't really tested it with a lot of objects as it required me to use the catalogue solar panel rather than one I had already purchased.

I do think it is a bit hard to do as I have had to zoom in on roofs to get it to work with different angles, however the initial time I used it, it was rather zoomed out and I was checking out all of the new items added with the latest expac. I don't feel that it is a high priority bug to fix, however I found it humorous enough that I had to share it and at least have the developers know of its existence.

EDIT: I just threw in an edit in step 2. I found that if you press F3 or go to the build menu to purchase the panel, it wont let you perform the glitch; however if you use the 'search' feature for it, the glitch will work.

@TemporalNix  Interesting.  The only things I tried that I could get to do it were the wedding arches.  I'll have to play around with it some more to see what other items will do it.

Actually, if it will work for other things, players that build custom lots might really like it as it could allow items to be placed at angles you couldn't do before.  Could end up with some really neat builds.

I did find that if you tried to copy the item, it wouldn't work either since you couldn't select another item.  I just went to the regular build/buy and found the panels.  Didn't do a search with any filters.

@CGrant56 The easiest to do this with seems to be wall decorations as it doesn't really change their placement method but will rotate them. Now I can make a house with crooked paintings and share it to annoy people.
Message 5 of 5 (204 Views)
Reply
1
New topic