Product: The Sims 4
Platform:PC
Which language are you playing the game in? English
How often does the bug occur? Often (50% - 99%)
What is your current game version number? 1.63.134.1020
What expansions, game packs, and stuff packs do you have installed? Everything except Moschino
Steps: How can we find the bug ourselves? I put food trash in my inventory from the trashy community lot. When I got home, I dragged it out on the ground to feed my crickets. I moved the pile again by dragging and it turned into an instant trash plant. I tried this with several other food piles and the same thing happened.
What happens when the bug occurs? Drop trash on the ground that was once in your inventory. Drag it around the lot.
What do you expect to see? Trash
Have you installed any customization with the game, e.g. Custom Content or Mods? Not now. I've removed them.
Did this issue appear after a specific patch or change you made to your system? Yes
Please describe the patch or change you made. Eco Lifestyle

I first discovered this when I dragged the trash to the ground on the first floor, but realized my crickets were on the second floor and my sim won't take the food trash up the ladder. But the glitch also works when dragging on the same story.

@Willowana Does this happen in all neighborhoods you play ? Is it 'fresh' trash ?

I noticed the same thing with trash that was in my sim's inventory and my sims live in the new world of Evergreen Harbour. (No mods/cc in my game, all the packs, version 1.63.134.1020 , after I installed Eco Lifestyle I did a game repair and cleared my localthumbcache file ).

I have seen this as well: testing this report sending a sim gathering trash in the dumpster in Evergreen Harbour, dragging it out from inventory to the ground (lot Bargain Bend, WC), and then dragging it again, made a grey-black pile for trash fruit plant. And also testing another report, having a sim in Evergreen Harbour, in the apartment complex in Grim's Quarry. They had a trash pile in their inventory (that I do not know when they got), and I could drag it out onto the flooring in the apartment, and by dragging it again it became a trash fruit mud pile. My sim could water it. Tried to move it to another place in the apartment in Build mode, but the tooltip stated correctly that it needed terrain. Tried to replicate this in the first save folder, by dragging trash inside, but couldn't, and the trash stayed trash when dragged on the terrain as well.

EDIT: Here it is, thriving in the living room, possible to harvest from as well :D 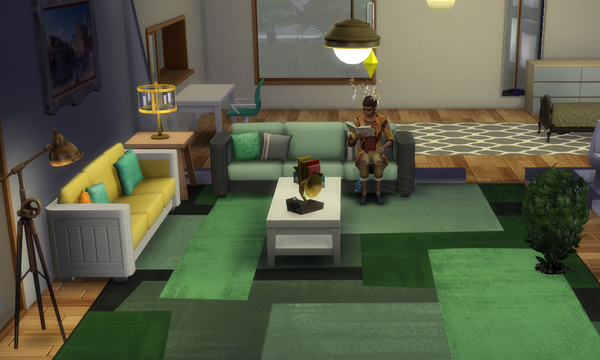