Hope it's ok to write on this post. I am having this issue right now. The spice festival will not go away and it's been 2 sim weeks. It was merged when it started and then all the food instantly spoiled. I'm gonna delete the save so I can still play but I uploaded it to my google if want to see it.

Could you send me a private message with a link to the save?

I do play with mods and cc so i thought it was something with that. I was able to snap a screenshot of what it looks like. I dont even think the festival was even happening.

We're still having trouble reproducing this, even with the previously provided save. If anyone else is still seeing this, a save file would be much appreciated, thanks so much for the help! https://answers.ea.com/t5/Bug-Reports/INFORMATION-How-to-Send-User-Files-to-The-Sims-4-Team/m-p/6065...

festivals objects in each other

Product: The Sims 4
Platform:PC
Which language are you playing the game in? Nederlands
How often does the bug occur? Rarely (0% - 9%)
What is your current game version number? 1.52.100.1020
What expansions, game packs, and stuff packs do you have installed? all dlc and the new island living.
Steps: How can we find the bug ourselves? Go to a festival.
What happens when the bug occurs? my family does not live in the festival world, a sim called my sim to come to the festival. when i was on the festival, it looks like there are 3 festivals or maybe 2 festivals stuck in each other. some objects cant be used anymore. i wait until festival disapeared but i have the feeling there are stil more objects then it should be. normaly i alwase wait until the festival is gone. i have not played in the festival world's for a long time.
What do you expect to see? normale i see just 1 festival
Have you installed any customization with the game, e.g. Custom Content or Mods? Not now. I've removed them.
Did this issue appear after a specific patch or change you made to your system? Neutral/Not Sure

the first photo is then i came at the festival i think it was the curry festival, but my goal of the date was to lissen to music and people who play music. 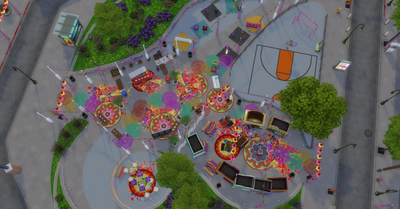 this photo is when the festival was gone but it feels like there are more objects then it should be... 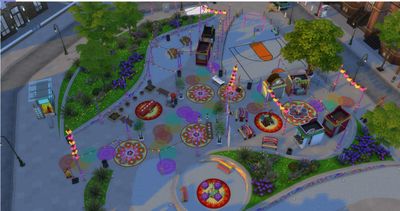 i really wanna know what i should do to make it normal.

I haven't had this problem for a while now, and I never stay until everything has despawned. Do people still have this problem?

I just got the old bug where the Romance Festival never disappears completely and blocks Geek Con stuff.

I went back a "year" later, on the next Romance festival and used my reward points to keep my sims alive all night.

It  is now 9AM the day after and three pillars, some lights and two tables are still there (Romance stuff, not the regular stuff at the Fashion District Square, I can tell the difference).

Its the same pillars and tables that never despawned before and blocked some stuff at Geek Con.

Since this issue was first claimed to be fixed by the devs in 2016, it is about time someone looked into it? Maybe just remove one of the festivals since it is obvious it's not working out to have two festivals in the same district, period?

Yes I sound grumpy by this is very annoying if you like City Living, and it makes one district far less useable (the obvious solution is to always ignore that it exists, since it cannot be fixed).

See above. Yes. I have it today, and permanent. It does NOT help to wait until the festival has dispawned, because it never does, fully. Do you still need save files? Because as I said, I just got this again. Romance Festival, as usual, is the culprit and never disappears complete. And it is worse than before, since it no longer works to just wait it out. I have kept my sims awake with reward store potions and it is now 9Am the day after and three pillars and two tables never disappears.

@Beardedgeek72 Have you tried staying at Geekcon until it has despawned completely and then stay to see if those Romance Festival things despawns after Geekcon has despawned? To keep your sim alive you can use “testingcheats on” (without the quotation marks) and then you can just shift-click on your sim to refill their needs.
Message 19 of 38 (570 Views)
Reply
0

Product: The Sims 4
Platform:PC
Which language are you playing the game in? English
How often does the bug occur? Every time (100%)
What is your current game version number? 1.60.54.1020
What expansions, game packs, and stuff packs do you have installed? all of them
Steps: How can we find the bug ourselves? its a constant festival in the arts area .. it never stops
What happens when the bug occurs? constsnt festival and last exception alert … even with mods out
What do you expect to see? I just went to that area in game for the sims work and the festivals wont stop and everything there is on top of each other
Have you installed any customization with the game, e.g. Custom Content or Mods? Not now. I've removed them.
Did this issue appear after a specific patch or change you made to your system? Neutral/Not Sure