Product: The Sims 4
Platform:PC
Which language are you playing the game in? English
How often does the bug occur? Every time (100%)
What is your current game version number? 1.55.105.1020
What expansions, game packs, and stuff packs do you have installed? Seasons, Cats & Dogs, Get To Work, Outdoor Retreat, Cool Kitchen Stuff.
Steps: How can we find the bug ourselves? Place a "Crates a Million" item inside of a home. Click on the different swatches. Then place one outside and see the difference between the colors of the first swatch.
What happens when the bug occurs? There is a large shadow on top of the box that makes the item look much darker than it is.
What do you expect to see? The box should not have a shadow and should look much lighter. It should look the same when selecting color swatches as it does when not.
Have you installed any customization with the game, e.g. Custom Content or Mods? Not now. I've removed them.
Did this issue appear after a specific patch or change you made to your system? Neutral/Not Sure

When decorating a home today, I realized that a crate I used (for decoration) is much darker than it should be. If placed outside, it looks normal, but it's covered in a shadow when placed indoors. This is inconvenient when wanting to use it as decor inside a home. 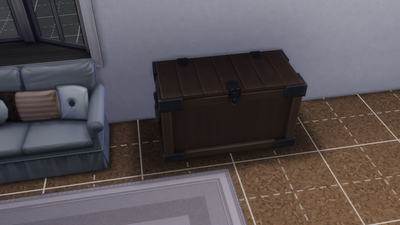 Here, you can see what it should look like (on the right). I had the color swatch options up on the right box. Screenshots don't show that. 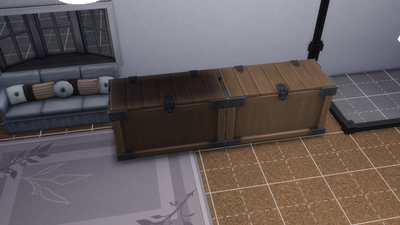 I also took a couple videos of this. In the videos, I have CC enabled. I took it out and started the game again, so you can see in the above screenshot that it still occurs without CC.

Adding more lights, putting it in a different room, and changing the size doesn't fix the problem (as demonstrated in the videos). It only looks normal when used outside. Maybe they're meant to be stacked to hide the shadow or only used outside, but I can't find a good reason for it to be so dark.

Does anyone have input on this?

@RoseLudaA i was able to duplicate it and have forwarded it but it could be by design as other lighting stuff.

Seems no one else is bothered by this.

@crinrict I am also bothered by this ! There are a handful of 'outdoor' objects like the crates that do not light properly indoors. My Own Private Eden Patio Shrub from Basegame; Nature's Hyjinks Boxwood Shrub from Get To Work; Ring of Flowers, Victorian Garden Planter, Lonely Cypress from Get Together; Potted Jungle Fern, Lonely Potted Tree from Jungle Adventure... and this is really just plant decor
Message 4 of 4 (254 Views)
Reply
2
New topic