Product: The Sims 4
Platform:PC
Which language are you playing the game in? English
How often does the bug occur? Often (50% - 99%)
What is your current game version number? 1.75.125.1030
What expansions, game packs, and stuff packs do you have installed? All the expansions, all game packs except journey to batoo, most stuff packs.
Steps: How can we find the bug ourselves? Idk. Probably by playing the game.
What happens when the bug occurs? A random ghost keeps invading my house. Nobody in the household knows this sim but the ghost keeps coming in and practicing acting in front of the mirror.
What do you expect to see? This not happening. Duh.
Have you installed any customization with the game, e.g. Custom Content or Mods? Yes
Did this issue appear after a specific patch or change you made to your system? Yes
Please describe the patch or change you made. After installing dream home decorator.

After installing dream home decorator, during night time a random ghost appears to invade my home and practice acting in front of the mirror. None of my sims know this sim. The ghost just comes in and doesn't go away until morning.

@pilvipekkinen What are the lot traits ? Did you test without mods installed ?

The lot has no traits. This still occurs with mods off. Happened again. 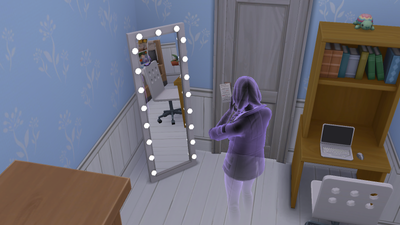