I had the same issue. (I have all dlcs except nifty knitting, no modes, recent returnee so near fresh install)

I had the same bug and finally found a way to make it works!!
To use your scanner for the first time, go in town (not the laboratory) and take care of a flower. After the flower opened, scan next to it. If you don’t find spore, try another and repeat the process till you get one.
Then go to the laboratory when your scanner is charged and use it.
For me, it works. I hope it’ll works for you too. 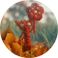 I had the exact same issue and I figured out what it was so I'll post here in case this helps someone.

I had my Sim's aspiration set as 'solve the Strangerville mystery'. In the first part of the aspiration there are three tasks to complete which loosely correlate with solving the mystery, however there is one extra task to complete which involves you buying a curio. This has got nothing to do with progressing the SV mystery, so I didn't do it. The problem was, I continued to progress through solving the mystery (collecting evidence, dossier etc), and then WENT BACK to buy a curio because I thought 'huh, I should probably do that'. I then got stuck because the next part of the aspiration involved collecting evidence, and putting together a dossier, which I had already done, but the game was now registering as incomplete. I had the scanner at this point, and was getting the same error you described - it needed charging and was unusable no matter what I tried. I realised that the game essentially thought I was still in the evidence-collecting stage (as that's where I was on the aspiration), and the made the object unusable. What worked for me was using UI cheats extension, and marking the aspirations tasks as done up to the task I had actually completed in game (just literally right click on them). I was then able to continue on as normal.

TL;DR - if you have Strangerville Mystery aspiration on, make sure you complete the tasks in order even if they don't relate the mystery, otherwise the game will not register you as having progressed (even when you have) and you won't be able to use objects or use certain interactions.

Goes for anyone in this thread.

I have the same exact issue. I left my Strangerville family for one sim week and came back and the scanner was still low. Another glitch I have only in Strangerville is my sims freeze and won't do what I tell them. For example I told them to go to bed and they stood in front of the bed for hours. I kept resetting them and they still did it. When they finally got in their energy wouldn't go up and the time speed didn't increase. I left the household and came back later. I told my sim to run on the treadmill and he just stood in front of it for hours. I just gave up on it.

I tried to use the infection for the FIRST time and got the "battery low" message. I don't see the point in having to clear cache files, save, repair, restart, reload saves and whatever else rigmarole and other associated *. I thought this was a game, not a course in advanced computer diagnostics or whatever.

i can only conclude that this dlc is utter * and I won't ever be buying another EA game again.

@Komori44 Scanner's charge level resets upon traveling often. Regardless of if it's first use or not. For me, at least.

To reproduce reliably: wait until it's fully charged, travel, let's say, from StrangerVille to some Valley Del Sol culb, travel back to location from which you started. Using 'maximum zoom out until option to travel appears' to initiate the travel in both cases.

Just came across this issue on PS5 trying to complete the SV story. The scanner was low and I could not use it. I've completed the story a few times before on different saves, but on this new save it would not work.

I've submitted my save.

Is anyone still having issues with this ?

This issue should be fixed now, the charge functionality was completely removed. So there's no such thing as having a "low battery" anymore, the "Scan Area" interaction should always be available now and never greyed out.