[FIXED] [OR] Too many fires on campfires/routing issues to extinguish

@hestiah23 Moving your post over to the thread on that.

The thread you posted in was about them adding logs over and over.

One thing I've noticed in my game is that while these portable campfires almost always start accidental fires on residential or rental lots, they appear to be safe to use in non-residential lots and common areas. I'm wondering if the portable campfires are bugged on residential and rental lots and the routing problem is there because the accidental fires were never designed to occur in the first place?

When I first started playing Outdoor Retreat I would try to use the portable campfires at one of the several rental sites in the Campground area, and invariably they would catch a nearby object on fire (chairs, guitar, etc.). Once the accidental fire started I could never extinguish it due to the same routing problem as mentioned in other posts here. So I stopped using the campfires on the rental lots and switched to only using the campfires in the common areas in various locations at the campground and forest areas. After spending many days in Granite Falls, I have not yet had any accidents while using those common area campfires.

I've also been able to safely use the portable campfires in other worlds as long as the lots are designated as something other than rental or residential. I made three unofficial campsites, one each in Brindleton Bay, Oasis Springs, and Windenburg, by taking empty residential lots and changing the lot designation to "generic" in World Edit. I added landscaping to match the local area, a portable campfire with log or rock chairs, and rudimentary restroom facilities. My Sim is able to place and rearrange all of her camping equipment on these lots and sleep in her tent overnight for as many days as she wants. The lots are generic so they don't fill with NPC Sims trying to sleep in my tent, etc. She uses the campfires daily, with all interactions, i.e. roasting food, playing guitar, adding more logs, etc., and no accidents so far. I've done this dozens of times on these generic lots.

Here is my Sim using the campfire at my unofficial campsite in Windenburg. 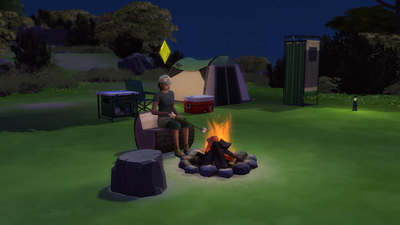 @RandomBuzzinessThe accidental fires are part of the Outdoor Retreat and is caused by failure to start fire or add log to fire, or failure to add fuel to the fire from Get Together which added other stuff you can add to bone fires, not sure what else you can add to fires from OR There is a chance for a random object to catch on fire if you get too carried away with stocking the fire. Try putting the main fire out first before putting the secondary fire out as sims can not route through fire. Move all sims away from the object on fire, because if sims are complaining about fire on objects the one putting it out can't extinguish it because object is in use by other sims.

@Sid1701d9 I do agree with everything you wrote. My point is I am not 100% sure the accidental fires in the Outdoor Retreat fire pits were intentionally added by the developers, and that is why we also have routing issues putting out the fires. It seems more like a bug to me as the OR fire pits are completely safe to use in some lot types but not others. In my game, the OR fire pits seem bugged on residential and rental lots but fine on non-residential lots.

When I use the OR fire pits on non-residential lots I can add all the logs I want, the only thing that happens is the fire gets bigger. I can use cloth, wood, or stone seating, I can even leave the fire unattended and nothing ever catches on fire. I never have to worry about routing issues because there are no accidental fires to put out.

Here is my Sim back at her Windenburg campsite on a "Generic" non-residential lot. She's just added 5 logs to the fire. 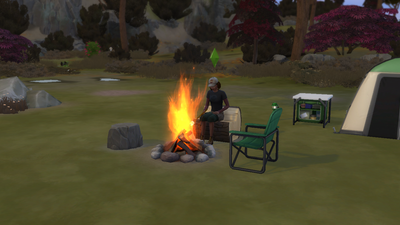 The flames got larger but no accidental fires & she's roasting marshmallows like everything is normal. This is how I believe the OR fire pits were intended to work. It's also how the bonfires from GT work. If this was a residential lot, the camp chair, the log bench, and probably even the stone chair would all likely be on fire.

I see from earlier posts that this issue has been going on for more than a year now so a fix seems unlikely. As the OR fire pits seem safe to use in either the common areas in Granite Falls or non-residential lots in other worlds, at least we can enjoy using them that way in game-play rather than avoiding to use them altogether.

@RandomBuzziness Here is it reported in Nov 2016, Stoking a fire playing with fire and adding too many logs could catch your sim on fire or other objects, rules go by the fireplace before upgrades which gives a chance of other things catching on fire. The snap thing came after OR so move the benches and chairs away from the snap grid. https://forums.thesims.com/en_US/discussion/903714/chairs-attached-to-fire-pit-catch-on-fire-bug-or-...
Message 26 of 61 (737 Views)
0

Like many others in this thread, these fire pits have always given me trouble when used on residential or rental lots like in Granite Falls. Too frequently they would catch nearby objects on fire even during normal use like roasting food. After installing today's patch I was able to use the OR "Rocks of Fire" fire pit at one of the campground rental lots in Granite Falls, with several chairs snapped to the fire pit, and had no problems. I tested it for 3 game-days with no accidents. My Sims were able to roast hot dogs & marshmallows, play guitar, tell stories, etc., with no accidental fires.  Adding many logs at one time did not cause any problems- it did make the flames grow higher, but the fire pit continued to function as normal.

I did additional testing on a residential lot in Willow Creek. I had two camp chairs snapped to a fire pit, and even placed a book next to the fire pit, let it run a full game-day with no accidents.

EDIT: In further testing I am still seeing accidental fires with the portable fire pits on residential or rental lots with no means to extinguish them due to routing issues. The only thing that seems to be working better is routing for roasting items on the campfires.

I have been able to use these fire pits on non-residential lots for some time now (see posts above). It was only when used on residential and rental lots that they seem bugged. After today's patch they seem fine on all lots.

Btw- Routing for roasting food (hotdogs, marshmallows) was fine both with and without chairs.

Hopefully others here can confirm all this in their games as well.

All testing was done on a CC and Mod-free game. 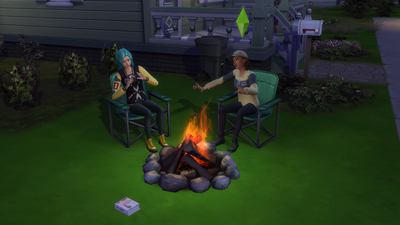 EDIT: After about a month of various testing I am still seeing too many accidental fires while using portable campfires on residential or rental lots. I don't want my original post to confuse anyone. It's not as frequent as before but it still happens often enough that I avoid using them on residential or rental lots. They still seem fine on generic lots or in world areas. The routing for roasting still looks good as well.

@RandomBuzziness Maybe it got fixed along with the other fire pit issue :D

Or maybe this was fixed and the other wasn't ? Could you check if this is fixed for you too: https://answers.ea.com/t5/Bug-Reports/FIXED-OR-Routing-Failure-on-try-to-roast-something-on-Campfire... ?

@crinrict I was able to roast things both with and without chairs with no routing issues, at least for the Rocks of Fire. I will try the other type of fire pit today and post all this on the other thread. I want to play around more with the "too many fires on campfires/routing issues to extinguish" anyway. 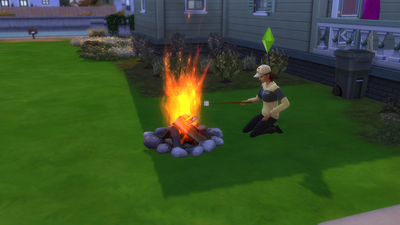 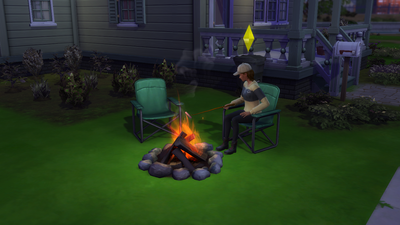 I'm still having this issue after the most recent patch. I can't say if it was happening before the patch, as I just started a save in which I'm relying on the fire pit -- I haven't used it much at all before.

If a copy of my saves would help in figuring out this issue, I've zipped them for your downloading needs. My specific game setup is: Win10 64-bit with all packs except My First Pet Stuff installed.

While I like the thrill of danger, I'm going to try using the fire.toggle false cheat to disable fires entirely until this gets resolved, as I've had to exit my game and lose progress several times now.

To all you Simmers, Community Outreachers, and Devs that might encounter this post in the next week or so, Happy Holidays!