Product: The Sims 4
Platform:PC
Which language are you playing the game in? English
How often does the bug occur? Every time (100%)
What is your current game version number? 1.58.63.1010
What expansions, game packs, and stuff packs do you have installed? Everything
Steps: How can we find the bug ourselves? Have a vampire sim and make him into a spell-caster... overtime the sim will start changing between human/vampire/spell-caster.
What happens when the bug occurs? at first I took my vampire sim and made him a spell-caster which made my sim a vampire/spell-caster hybrid, which means i have vampiric energy, i drink blood for food, I have powers and weaknesses of vampire and also the powers of a spell-caster, at first my green sim icon above head was always a vampire, then I realized later it changed into a spell-caster, i brushed it off and kept playing the game in university, eventually I'd come to realize i can no longer convert humans to vampires, but he will attempt to do so anyway... what happens is he drinks from neck to begin the transition but he stops there and doesn't offer his wrist as usual, also i can do it several times and it keeps failing and I'd also realized that when he attempts to turn someone into a vampire he doesn't go dark form as usual so i noticed i can no longer turn into dark form, I'd seen an old post on a forum with a solved problem to get dark form back with using mirror to change sim look so i did that and it gave me the choice to add a dark form so i did, after that I hoped the bug was solved but it was only the dark form that was back, now when he attempts to turn a human into a vampire he goes dark form and fails as usual without continuing to give out his wrist for the human to drink and if i open edit CAS through Shift+Click i have no occult, I'm human with vampiric powers and weaknesses except that i can't turn anyone into a vampire, and i also have the spell-caster powers, and i also cannot reset my powers. If i turn myself into a human using both cheats to remove vampire and spell-caster traits i lose all the powers both vampire and spell but i can still see the "Magic" tab if i click myself and i can interact socially with other spell-casters talk to them about spells and potions, but its all social, no powers at all, i can only "give potion". I tried to remove both vampire and spell-caster and put them back it goes back to the bug, i tried reset sim both before i bring back my powers separately as vampire and as spell-caster and as both powers brought together and reset sim after and the bug is still there, this issue is only on one sim, and i cannot reset any of my powers at all.... even though all the other issues aren't happening to the other sims at all, they can't reset their powers either, otherwise everything with them is normal. So really my Sim is a hybrid Vampire/Spell-Caster disguised as a human with minor disadvantages.
What do you expect to see? I expected to make a hybrid as i didn't know you had to be either/or because i didn't know that to learn magic was to be in another occult until i saw the Spell-Caster banner on the green sim icon above head.which was way too late by then because the bug was already in effect.
Have you installed any customization with the game, e.g. Custom Content or Mods? Not now. I've removed them.
Did this issue appear after a specific patch or change you made to your system? Yes
Please describe the patch or change you made. This only happened in the new update, I tried making my vampire into a mermaid before and it failed, this new update bypassed this with the spell-caster apparently.

Before i restarted my game I'd brought back my Dark form, now i can't get it back the same way i did the first time as explained earlier, also, i have spells to use as well, i just don't think it's worth adding another screenshot just to show you the list. 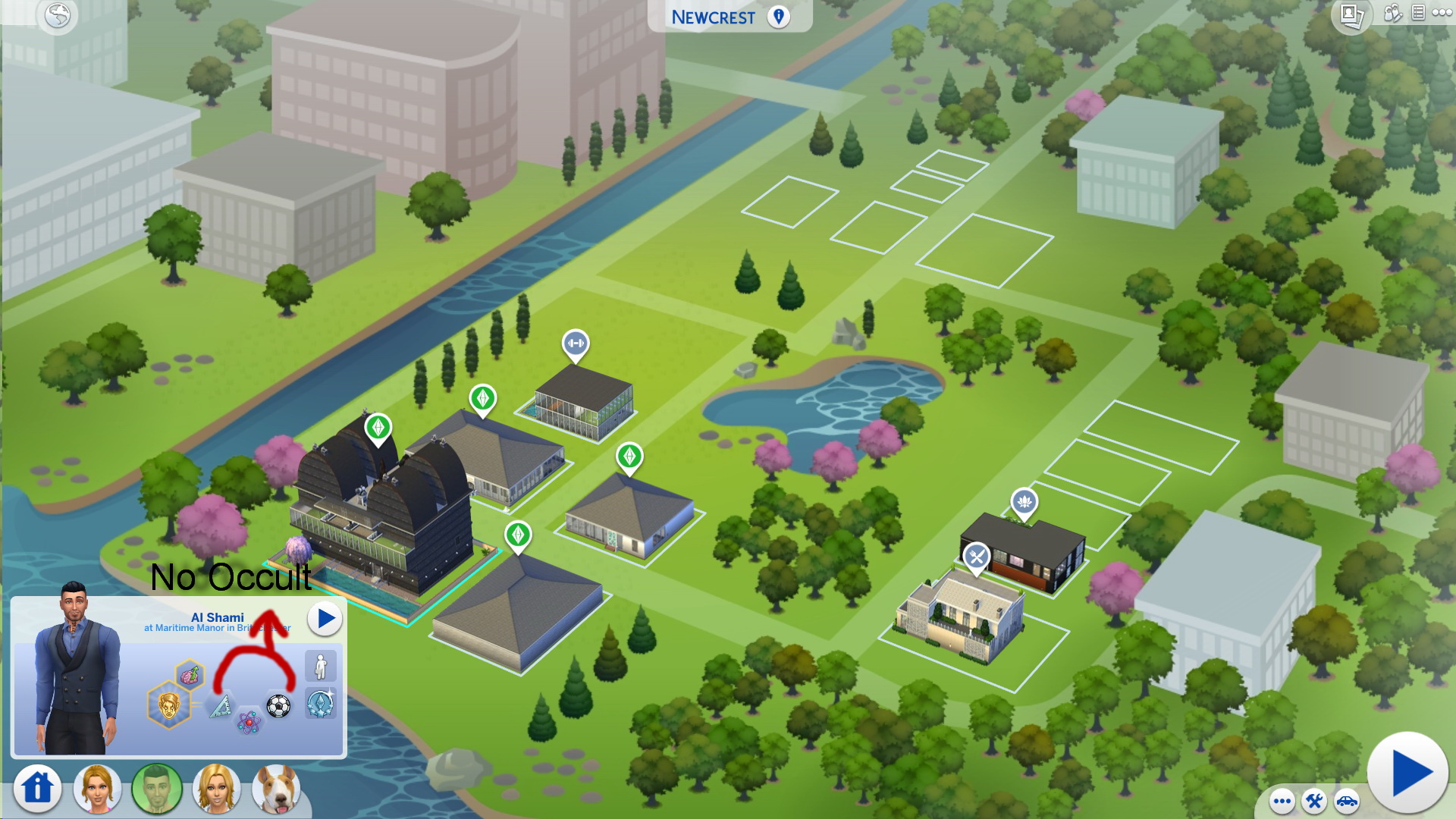 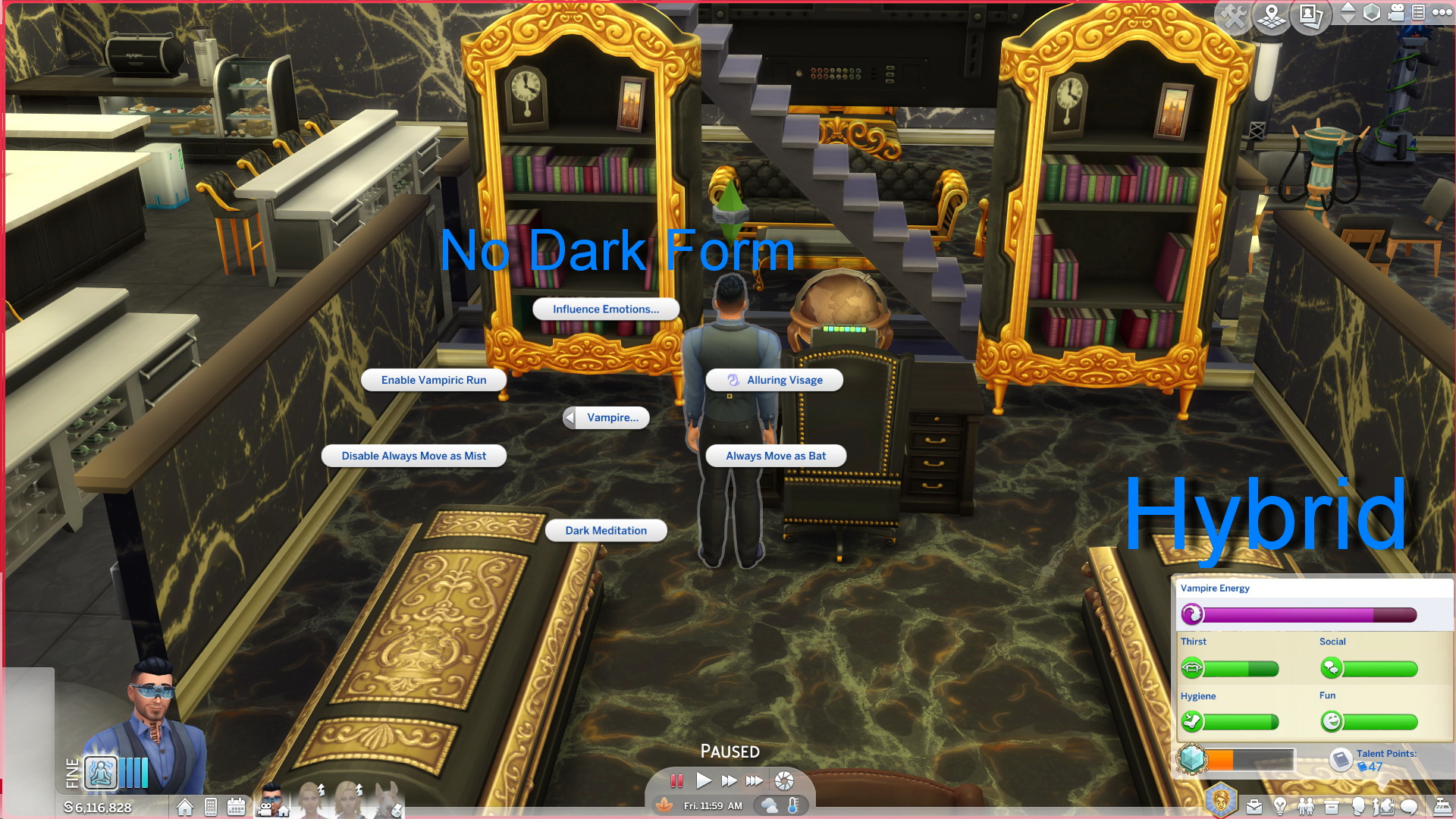 Mermaids and other Occults should no longer be able to make hybrid occults. How were they making them? Oh boy, I'm not sure if it's appropriate for me to give you the mermaid-birds and spellcaster-bees talk.

@Legendary-Al93 They shouldn't be hybrid for sure. So when you converted them to spellcaster, the Vampire traits should have been removed.

Does he unbug if you just remove one occult form ?

If i remove occult forms he's back to human, and after that if i put occult back the bug is still there, i mean if i want to play the human why get the occult expansions to begin with right?

I've tried every way that has to do with cheats and resetting sim to restarting game in different ways just to make sure i got everything right... you know how when you're trying to crack a pin code you you try every possible number  to try to get the correct code? that's exactly what i kept doing i tried everything possible through the game in ever possible way, the only way for me to fix this is to use my old save file which i saved and copied exactly before i became a spell-caster I had a feeling i was gonna get screwed over, lol, but that leaves me with hours of gaming wasted and i really don't want to lose what i did.

@Legendary-Al93 I wasn't sure if you put BOTH occults back or just one. Hybrids aren't meant to be so they bug out.

If you're not opposed to mods, you can check the hidden traits with Simsinfo (the mod is a bit broken but it should work if you use this sim) to see if they have any occult traits left that can bug them.

It should be fine if the sims is a vampire but has no other hybrid traits OR if he's a spellcaster and has no vampire traits.

And yes, of course it's a bug that you were able to have them both.

Mermaid with no tail or legs

I've just recently got the island expansion pack. This evening I had my sim eat kelp in hope she would change to a mermaid. I got her to take a swim in the ocean to transform but she has no fin visable and when shes on land she has no legs. I just have half a sim walking around and dont know how to get her back to normal. I've tried resetting her and that doesnt work, I have also gone into CAS to see if i can fix it there but it shows her as a normal sim and no option to fix the fin. Has anyone any ideas on how to fix this problem? I really dont want a torso for a sim haha
Message 5 of 15 (1,185 Views)
0

@hoshi247  Are you using any CC clothes, specifically bottoms such as pants or skirts.

The no legs thing is new to me, but I’ve experienced the missing tail. I’m not sure if you have tried this, but when I had this issue it was resolved after I went into CAS and linked and unlinked the mermaid form. Do you see a tail when you’re in CAS or when you choose “plan outfit” in the mirror?

@hoshi247Do you have a screenshot? This sounds quite entertaining, I wanna see!

@hoshi247 Going to merge this with the no tail bug report although the no legs part is new.

Does she have a mermaid form at all ?

@crinrict Hi, I havent seen the mermaid form of her at all yet but I can do mermaid activities with her. It is bizarre.
Message 10 of 15 (1,071 Views)
0
New topic