I seen my sim go to work in his pajamas or swimming suit, if they are running late they don't have time to change.  You can always force change them to the work outfit by clicking everyday wear before they leave for work.  It works for both active work career and when you send them off by themselves.

@crinrict do you know if this problem has been made known to developers?

Thank for your help everyone!

It is just so weird you know?

In the attached picture my sim is on a case, but he looks like he just got back from vacation!

Also when when he'll soon become a detective, I'm guessing he won't be able to wear the detective outfit which I really love. ugh 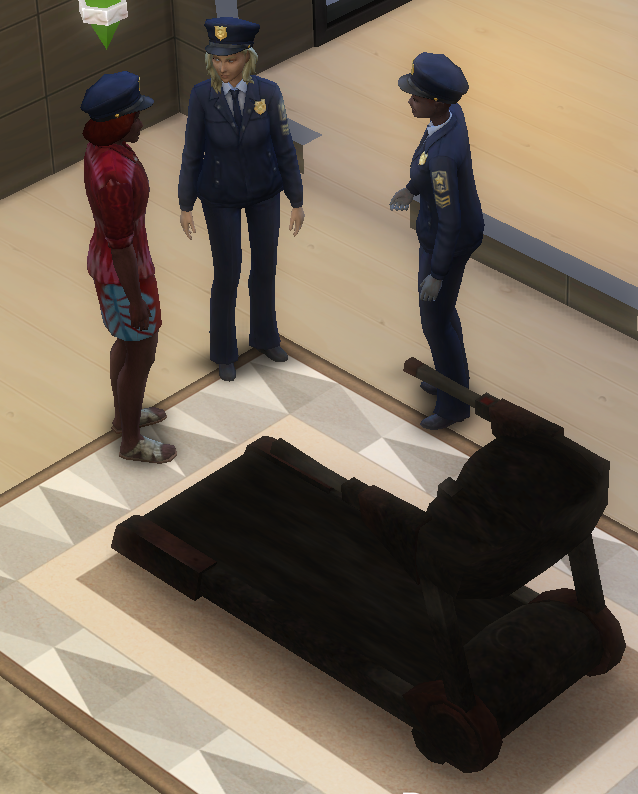 @ToKiHyou Yes, this has been forwarded but not many people have chimed in so it's probably not a priority, given all the other issues that are going on.

@crinrict sorry for the late reply and thank you!

In the meantime, is there a cheat/code to force your sim to wear the actual clothes they are supposed to wear?

@ToKiHyou There is one (sims.modify_career_outfit_in_cas) but it doesn't work in this particular case. Mermaids don't seem to like the police uniform.

Maybe they do wear it when they raise in rank

Also thank you every much for your help always

It shouldn't take me too long to get to the Detective level, when I do, I'll keep the post update on what happened.

Have a great Sunday!

I have the same issue, my Mermaid Sim won't wear her uniform at work, she wears a random everyday outfit instead. She works at the hospital.

Product: The Sims 4
Platform:PC
Which language are you playing the game in? English
How often does the bug occur? Every time (100%)
What is your current game version number? 1.59.73.1020
What expansions, game packs, and stuff packs do you have installed? All
Steps: How can we find the bug ourselves? Any career (so far tested with private attorney and part time life guard)
What happens when the bug occurs? Sim wearing outrageous outfits not pertaining to the ones unlocked with the career they are in.
What do you expect to see? Sims wearing career appropriate outfits.
Have you installed any customization with the game, e.g. Custom Content or Mods? Never used.
Did this issue appear after a specific patch or change you made to your system? Neutral/Not Sure

It seems like any sim I play so far has had this issue. I’ve noticed it first on my one sim when they were a life guard, and now I’m noticing it with the lawyer career. I’m not sure what’s going on. I’ve tried to modify the outfit in cas so she doesn’t look ridiculous but each new day she goes back to that horrible outfit! I just want my sim to use the outfit they get in the career

Edit: I attached a picture. It looks like the outfit changes every time she goes to work and it’s some ridiculous looking outfit like this! I remember when she was a life guard she had the same top randomly appear when she went to work too! Not even wearing a swimsuit!

I have seen this too lately, but mine don't go to that extreme.  What happens for me is that random shoes get added to career outlets.  What's interesting is that it's the IL careers that seem to be having the problem the most.  Nothing like seeing cowboy boots from Strangerville or rubber boots from C&D on my sim in the Conservationist career when they're in their wetsuit.  Females also show up in heels in that outfit as well.

It seems to have started with one of the DU patches where they did something that changed the situational outfits showing up in the Realm. That didn't last long or work completely since while the clothes are better, hats and headgear didn't seem to change much and actually got worse and now I'm seeing the DU mascot heads on sims there but I don't see the robot costume hat or the astronaut helmet as much anymore. It also seems to be worse after I throw a costume party, after I attend Geekcon or attend a campus event where the mascots are also in attendance.

Another thing I see is the BG long gloves (black or red mostly) ALWAYS get added to the work uniforms or every female vampire I have when they are in dark form.  I keep all my vampires in dark form most of the time.  Career doesn't seem to matter on that one either but mostly it's in the GTW careers (Scientist, Doctor, Nurse, don't have one in the Detective career atm) but also on hired bartenders and caterers when playables get drafted as npcs to fill those roles.  That has been going on in my game quite a long time, well before ROM and DU.

@AmaiYasai Is your Sim a normal Sim or an occult (Mermaid, namely) ?