Product: The Sims 4
Platform:PC
Which language are you playing the game in? English
How often does the bug occur? Often (50% - 99%)
What is your current game version number? 1.45.62.1020
What expansions, game packs, and stuff packs do you have installed? All
Steps: How can we find the bug ourselves? Appease the gnomes? Like REALLY appease them lol
What happens when the bug occurs? An endless gift of seed packets, even after holiday is over and others have been and gone.
What do you expect to see? The gnomes to disappear once the holiday is over, like last time.
Have you installed any customization with the game, e.g. Custom Content or Mods? Yes
Did this issue appear after a specific patch or change you made to your system? No

My Cup Runneth Over 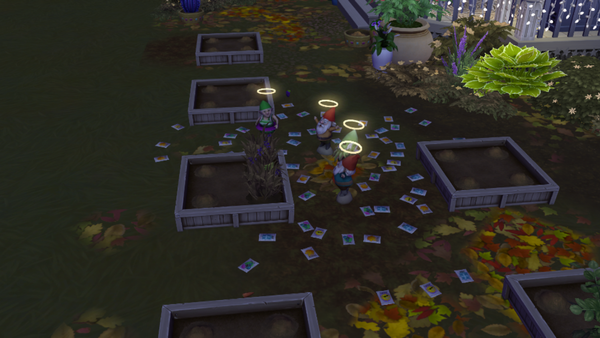 This is my second time round the calendar, the first time was in the previous patch (one before this current one) and I had the calendar set to the shortest time and everything whipped around just fine. This time round I decided to set everything to 28 days and this time when I appeased the gnomes they didn't disappear, instead they've stayed and they constantly 'reward' me with 60 constant items, mostly seed packets (as seen above) but also fruit (they love dropping grapes). When I collect the gifts new ones spawn, again, it's endless. I thought maybe a new calendar event would make them leave, no they stayed, I then thought a change of seasons would make them go but as I type they are out there still in the snow.

Now don't get me wrong, I find this totally hilarious and it adds a whole new level of entertainment for me but I figure it's not normal since last time this never happened.

before I posted I removed cc and entered the game and they were still there, I couldn't test this on a new game because the event has been and gone, maybe you could test it, if you can simulate this try a new game and see if it happens again.

We spoke to the Holiday Gnomes and they have agreed to stop dropping seed packets if your Sims are not on Lot when the Holiday ends.
○ They wanted to spread holiday cheer… or they were attempting to bring about the end of Simanity, and usher in a new world order. Tomayto, tomahto.

Gnomes wont despawn after the holiday.

Gnomes appear and never leave after Thanksgiving. I appease all 3 Gnomes and they never leave and clutter my house with seed packets and now im pretty sure they stole my computer.

I use mods but other people are having this issue too and they dont use mods. I have nothing that would effect this

Not sure if they should be treated as two issues or one. 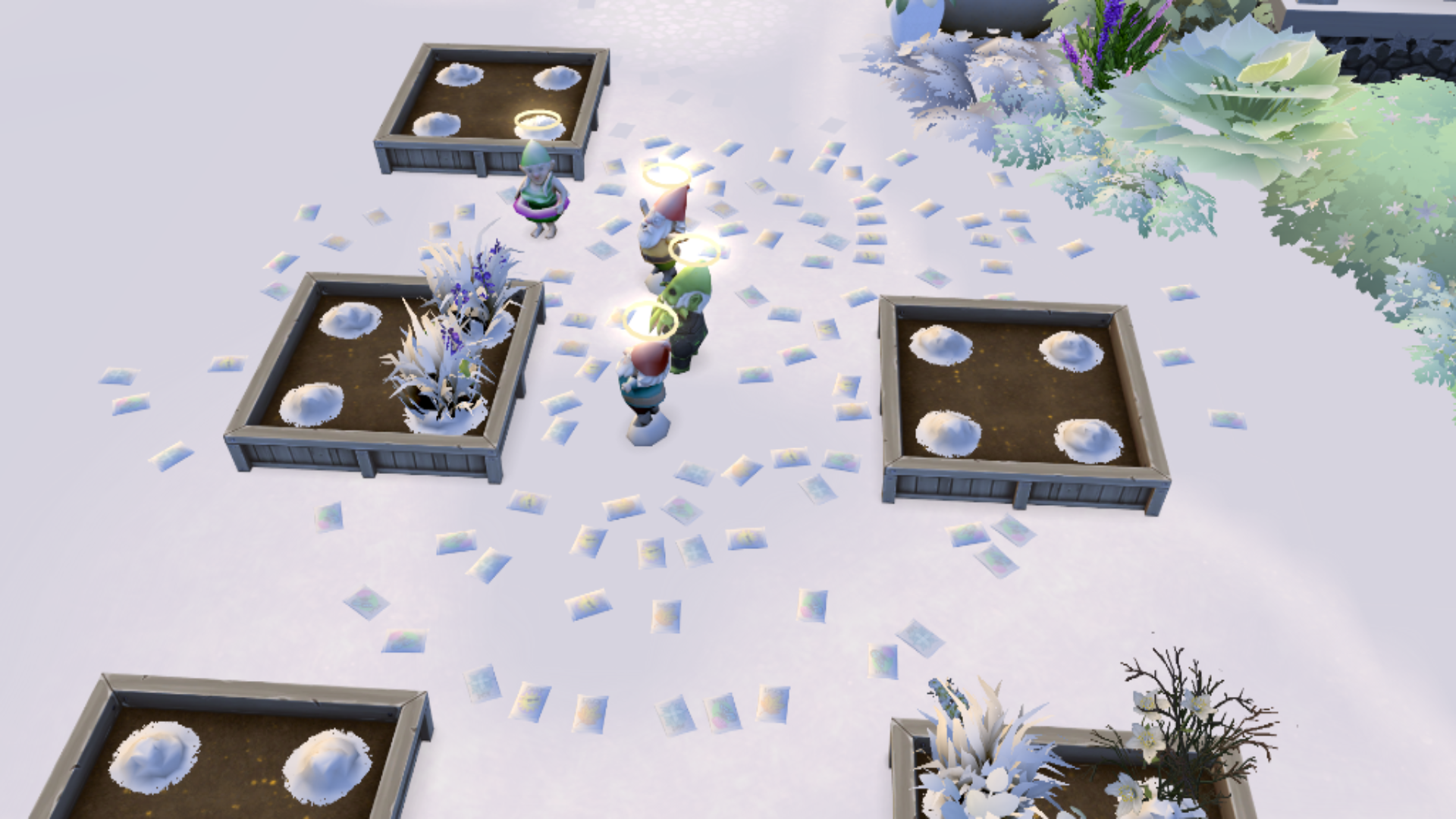 I need to make a correction.... definitely more than 60. I went on a 2 day vaycay and returned to this.... still funny. The screenie doesn't show the same amount that is under the snow (you can see the shadow of some at the back of the screenie at the top), so many seed packets :eahigh_file:.

EDIT: just read the other open report, there are similarities for sure. I'm located in Brindlebay though, not an apartment.  Trying to think of as much info as I can, one thing, right at the start of harvest fest, I had to log off half way through appeasing the gnomes so when I returned the two I appeased no longer had the halos but didn't offer the appease option, once I appeased the last two the halos returned to the two I had appease prior to logging off.... maybe if I appeased them all at once they would have despawned? Anyway good luck with it, as a gardener I have no complaints, also having them out the back (out of the way) means this isn't in my line of sight all the time, I'm sure if this was inside it would drive me a little nuts. Also I don't have any new cc since the last harvest fest when they did despawn, so something is up now.

The fix is to delete them... I just don't because free seeds are free seeds lol. But reported it because it's weird right? right?! lol

I have also just come across this thought it was a glitch at first. My Sim has just had her 4th Harvestfest but the gnomes do not seem to realise it has finished. They no longer move around but still have there halos and still leave seeds. No mods or cc.

Spring was around the corner for me so I wanted to see if they stopped giving packets if they gave you X amount so I stopped picking up the packets in the last week of winter ... 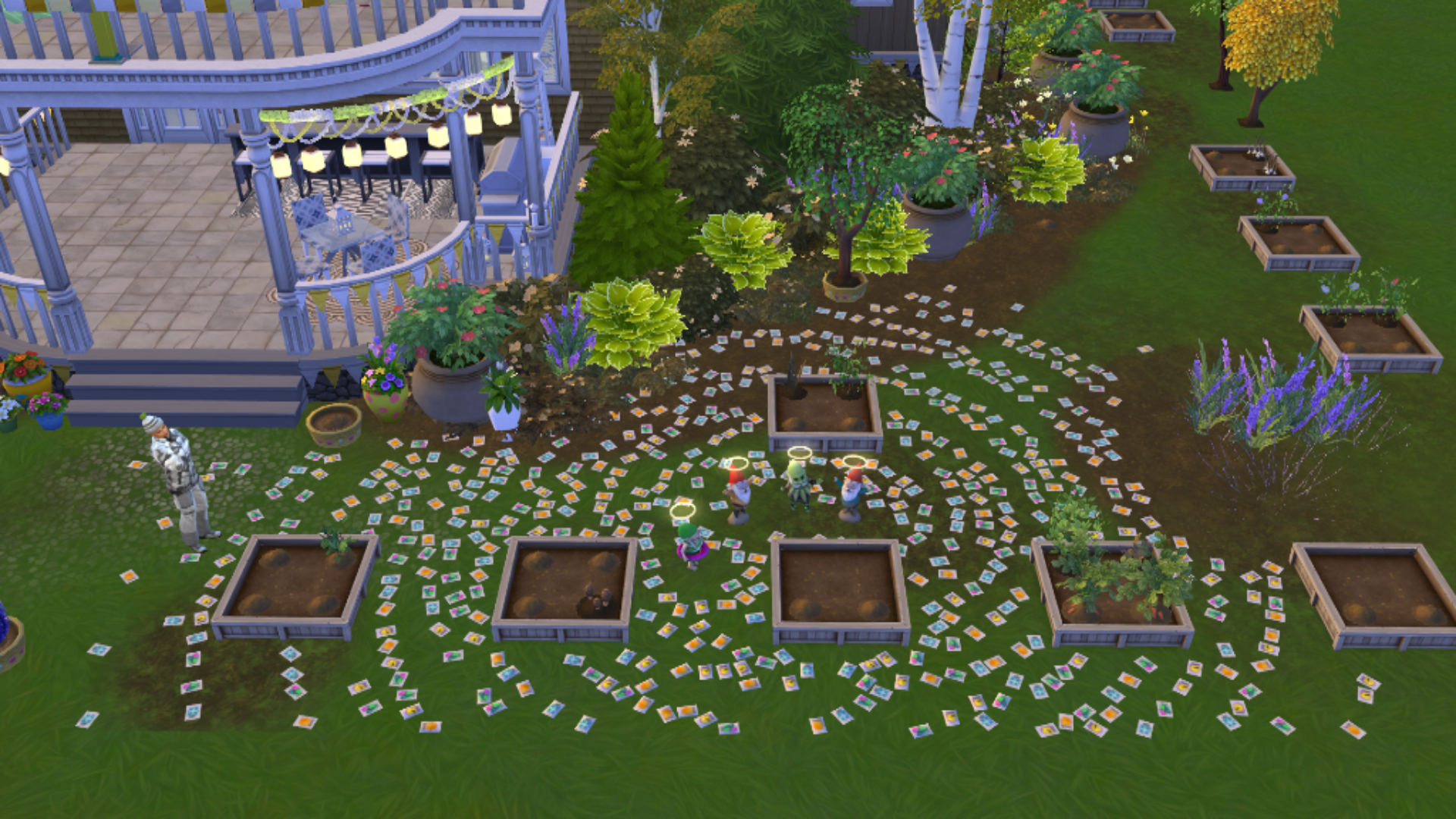 ... nope. They keep giving. This is exactly 7 days of not collecting.

It's spring now so I'm going to delete them. Definitely kept me entertained through those 28 days of winter though (omg some feedback, there needs to be something extra in winter to do (other than ice skate) since you can't garden or fish due to everything being freezing, definitely felt the 28 days, winter and fall was fine but winter felt painful to get through.)

It's a new garden decoration .. :D It looks pretty nice

Omg it's a bug?? First I thought my Sim, who lived with no money was blessed. The blessing became more and more annoying!

@alanmichael1 wrote:
I thought this was a feature. If you want to get rid of the gnomes you can simply sell them in build mode.

yep and if you don't want to open packets, in build mode choose the hammer tool and highlight one packet then drag a square until all are highlighted yellow then release, all will be deleted and you'll get the cash.