Product: The Sims 4
Platform:PC
Which language are you playing the game in? English
How often does the bug occur? Every time (100%)
What is your current game version number? 1.52.100.1020
What expansions, game packs, and stuff packs do you have installed? Seasons, Pets, City Living, Get Together, Get to Work, Vampires, Spa Day, Outdoor Retreat, Toddler Stuff, Movie Hangout, Spooky Stuff, Perfect Patio, Luxury Party
Steps: How can we find the bug ourselves? Find/play any household that has an alien in it, whether originally an NPC, or an alien sim that was born from a sim abduction.
What happens when the bug occurs? Whenever I view the thumbnail for a household containing an alien, or I look at the Family Portrait item, the Alien sim is wearing their disguise even though they are not currently disguised.
What do you expect to see? If the Alien Sim is not disguised, I expect them to be not disguised when viewing the portrait or the household thumbnail. I have a small amount of CC, but this issue was still happening even when I disabled it.
Have you installed any customization with the game, e.g. Custom Content or Mods? Yes
Did this issue appear after a specific patch or change you made to your system? Neutral/Not Sure

This thumbnail issue started appearing after the June 18, 2019 update. The screenshot with the purple alien girl (who is the result of a sim being abducted) shows the bug with the Family Portrait item, and the screenshot with the blue family shows the issue from the neighborhood screen. The sim circled is the only full alien in that household (the male sim is half alien, but he doesn't have a disguise or anything), and was an NPC alien.

From the fix notes:

I also started experiencing this yesterday when my game had to refresh the localthumbnail cache. The undisguised aliens in my game appear as their human forms in the family portrait preview in Manage Households, but when I checked them in game they were still undisguised.

i wonder if this is a new change that they applied because of mermaids, in order to keep their identities secret? I haven’t checked to see if this happens to vampires that are in dark form in game.

It looks like it's doing the same thing to vampires in their Dark Form. I put one of mine in his Dark Form, and the Family Portrait and Household thumbnails showed him in his regular form. Even when I saved the household and went to the neighborhood screen.

If it's not a bug, I don't like it. I'm not a fan of how you're forced to have human disguises anyway, so I never bother with them. But this makes my thumbnails look as though some random townies have infiltrated my families.

I agree. If it's not a bug, I don't like it. The first two playable aliens I had in my family tree, I kept the disguises on at first, because it was an interesting mechanic (and I wanted the Double Life Achievement), but after that I just didn't care. I leave the aliens in their normal, alien form. And it's disorienting when they're wearing their unused disguises in the thumbnails.

This issue is also affecting baby alien sims, who last I checked didn't have disguises at all. I had an abduction-induced alien baby born just prior to the June 18 patch; post-patch he appears as a "normal" sim in the family photo in the Manage Households screen. (The child on the far right is also an alien.) 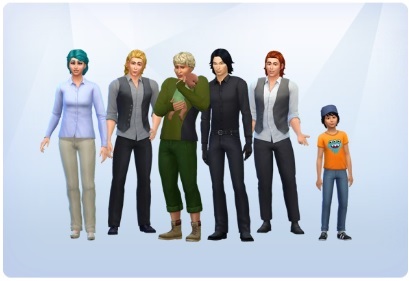 Townscreen pictures of occult sims are all in disguised forms

Product: The Sims 4
Platform:PC
Which language are you playing the game in? Русский язык
How often does the bug occur? Every time (100%)
What is your current game version number? 1.52.100.1020
What expansions, game packs, and stuff packs do you have installed? All of them
Steps: How can we find the bug ourselves? Just go to any townscreen, click on the house of any family with one or several sims being occult members (aliens or vampires)
What happens when the bug occurs? Even if saved in their true form (alien or vampire), all pictures of an occult sim, big or small, show such sims in their disguised form. The same maybe true for other occult forms.
What do you expect to see? All pictures of an occult sim should show him/her in the state they were saved with, be it ture form or disguise, just like it was before Island Living
Have you installed any customization with the game, e.g. Custom Content or Mods? Not now. I've removed them.
Did this issue appear after a specific patch or change you made to your system? Yes
Please describe the patch or change you made. Island Living plus previous/accompanying patch

After the Island living installed, even if saved in their true form (alien or vampire), all pictures of an occult sim, big or small, show such sims in their disguised form.
The same maybe true for other occult forms, I didn't check them.

While just a visual, it is quite an annoying glitch. In my game, some sims NEVER use disguise, it's quite disturbing to see them in other forms for me.

The first 2 pictures shows townscreen. The third picture shows how this sim was saved and how she should look like.

I feel like it's worth noting, I just noticed while playing today that the thumbnails are correct IF, AND ONLY IF, a member of the household currently being played is travelling from one lot to another.

HOWEVER, if viewing from the manage household screen/neighborhood view, the thumbnails are still bugged.

I really hope this is changed at some point. I have a full town of aliens that now no longer look like themselves from the map view which is unfortunate.