Product: The Sims 4
Platform:PC
Which language are you playing the game in? English
How often does the bug occur? Every time (100%)
What is your current game version number? 1.59.73.1020
What expansions, game packs, and stuff packs do you have installed? Get to work and free packs only
Steps: How can we find the bug ourselves? Unsure, I get it when invited to the Alien party
What happens when the bug occurs? I try to travel to Sixam through the archway and the game crashes and sends me to select a neighborhood (error message shown in attached screenshots). Alien characters are scattered randomly and a single couch generates on one of the platforms. Each time I try to quit the game and re-enter the couch regenerates (see other screenshot).
What do you expect to see? The normal alien party with furnishings on Sixam.
Have you installed any customization with the game, e.g. Custom Content or Mods? Never used.
Did this issue appear after a specific patch or change you made to your system? Neutral/Not Sure

other forum posts and contact EA chat have been no help. Does anyone know what to do for this error?

When my scientist sim travels to the Alien world the game crashes to the neighbourhoods screen and I get the following error message. I have no mods installed and all expansions packs except the Moschino pack. 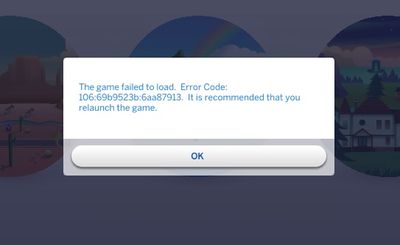 This error is most often caused by outdated mods or CC so I have a question. Have you never used mods, or have you only removed them from the mods folder now?
If you have never used mods try to fix the game in Origin.
Origin/My games library - right-click on TS4 - option "repair game"
You have to wait until Origin will fix all packs, not only the base game.

So, we will wait if fixing the game help

If it will not work there are other ways, but more complicated.
Message 4 of 32 (1,150 Views)
Reply
2
Highlighted

Repairing the game did not fix the error. Upon running the game I was asked to select which sim in my household I wanted to play. If I selected my scientist I would get the error back, choosing another member of the household loaded my household but all sims had their icons on their pictures like they were at work even though they were home. I had to go back to the main menu and load the game with a different household and then change to my household to get the household running ok again. Everytime I travel to the alien world though I get the error and have to do it all again to get back in.

@AussiePlumbob To be sure: No mods includes no cc right ?

I loaded your save and have no issues with sending any sim of that household to Sixam. Tried all 3 adults with the portal behind your house.

Did not go anywhere else before trying.

You get it right away and with all of them from the Sulani household ?

@crinrict It was only with Adrienne (?) that the error was popping up however I played the game further last night and she got to Sixam OK so I'm not sure what was causing it.

I would tell her to travel to the alien world and I would then get the loading screen but instead of taking me to Sixam it would put me on the screen with all the neighbourhoods and the error would pop up. Once I got the error it would not let me return to the game, I would have to exit the game, restart Origin and then return to the game. However, as I said, I sent her there twice last night with no issue. Bizarre.
Message 9 of 32 (1,085 Views)
Reply
1
New topic