Product: The Sims 4
Platform:PC
Which language are you playing the game in? English
How often does the bug occur? Every time (100%)
What is your current game version number? 1.47.49.1020
What expansions, game packs, and stuff packs do you have installed? All
Steps: How can we find the bug ourselves? Select a multi-story apartment in San Myshuno. Create an open story area within the apartment. View the lower floor from the open story section.
What happens when the bug occurs? Elements such as windows, doors, and stairs are invisible when viewed from the upper floor.
What do you expect to see? I expect to see all objects visible, as were seen prior to the patch and still seen in a regular open story residence.
Have you installed any customization with the game, e.g. Custom Content or Mods? Never used.
Did this issue appear after a specific patch or change you made to your system? Yes
Please describe the patch or change you made. Patch on 11/13/18

After the new patch today (13th Nov), any of my 2-story apartments with open floors glitch out; the windows, doors, stairs, even the in-the-wall-wardrobe (Squaring it Square).

I've tried reparing the game and clearing out all mods. The issue persists.

Building pieces in apartments will no longer be invisible when viewing from the upper floor. That must have been very disconcerting to not know what happened to your stuff.

Yup, apparently I marked this as fixed but forgot to post :P

Re: Build mode bugs after patch

I can confirm what you are seeing in my game as well @Hallinish - appears to be an apartments only bug, as I did not see the same issue in a regular open story home.  I believe it is related to the level upon which your camera is located; when you are viewing from the second story, various elements on the first story go invisible.  If you drop down a level, the elements reappear.  I will add it to our list of visual glitches.  Thanks for reporting!

Edit: I've moved the report to the Bug Reports forum and filled in the required form for the post (the Bug Report forum requires additional information).

Re: Build mode bugs after patch

I realised that I should have filled out a proper form a few hours ago when I browsed this site during breaktime.
Thank you for helping me out, and sorry for taking your time, it was very rude.

Graphic Bug happening in ALL lots of San Myshuno, and graphic bug in map view.

Product: The Sims 4
Platform:PC
Which language are you playing the game in? Português
How often does the bug occur? Every time (100%)
What is your current game version number? 1.47.49.1020
What expansions, game packs, and stuff packs do you have installed? All packs until Get Famous;
Steps: How can we find the bug ourselves? After modifying a penthouse or apartment, or completely replacing it with another building, additional tiles can be seen from outside the buildings in the map view. This problem happens in a similar way to another bug I reported here and has not yet solved: https://answers.ea.com/t5/Bug-Reports/OPEN-CL-Additional-floor-tiles-outside-apartment-after-modifyi... Second problem: Just go in a penthouses and apartments and try to view the lower floor through the upper floor in an opening area to the first floor as I have shown in the pictures.
What happens when the bug occurs? Stairs disappearing partially or completely when we move the game camera being on the second floor of the house, and viewing the first floor at the same time. First floor objects disappear when we visualize them through the second floor, through the opening of the floors .
What do you expect to see? Stairs and objects should not disappear or be inconsistent when viewed from a second floor in rooms with openings between different floors. And the additional floor should never appear in the map.
Have you installed any customization with the game, e.g. Custom Content or Mods? Never used.
Did this issue appear after a specific patch or change you made to your system? No

Do you remember the bug that I reported almost 3 months ago (and has not yet been fixed) that causes aditional tiles appearing outside the apartment selection UIof The Sims 4 City Living? LINK: https://answers.ea.com/t5/Bug-Reports/OPEN-CL-Additional-floor-tiles-outside-apartment-after-modifyi... I need to report that the problem has gotten worse now, and after the November update, these aditional tiles can now be seen in the map view, usually after we make some modification in the original lot or we replace it with a completely new building. 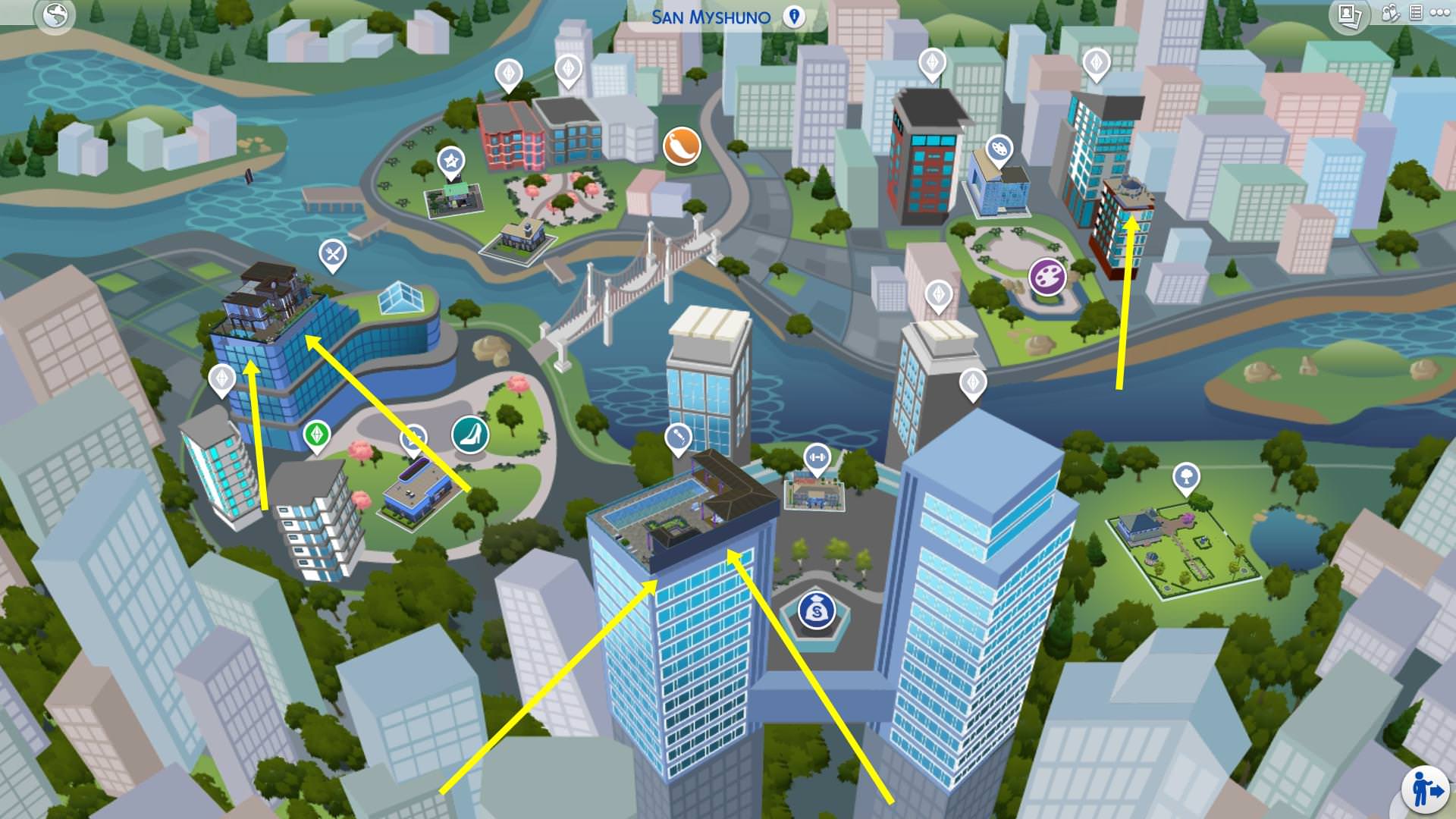 After the November update, several lots of San Myshuno are suffering graphic problems. These problems usually happen in penthouses and apartments that have more than two floors.

When a penthouse or an apartment has an open area in the first and second floor division, when we try to view the first floor through the upper floor, the stairs begin to suffer graphic problems depending on the position of the camera, and many objects that were on the first floor begin to disappear.

From what I've come to realize, this problem only happens in areas with openings between the first and second floors, and logically affect stairs, since they obviously make an opening in the floor.

I already asked some friends to check in their games if the same was happening, and they confirmed that yes, the problem was also happening in the same way.

I honestly hope that these problems, including that of the other publication, are resolved. San Myshuno is DESTROYED. Not only do we have graphical bugs in the apartment selector ui, as well as graphical bugs on the map, and now an even worse graphic bug happening within lots.

Re: Graphic Bug happening in ALL lots of San Myshuno, and graphic bug in map vie

@Simificando merged your report with the pre-existing report for the visibility of downstairs objects in apartments.  As for the tiles outside apartments issue, please add any updates/comments to the original thread, which you already linked.  We do want to keep issues separate for tracking purposes.  Thanks!

[TO TEST] Problem with rendering furniture in multilevel apartments

Product: The Sims 4
Platform:PC
Which language are you playing the game in? Polski
How often does the bug occur? Every time (100%)
What is your current game version number? 1.47.51.1020
What expansions, game packs, and stuff packs do you have installed? Everything except 6 Stuff Packs: My First Pet Stuff, Toddler Stuff, Bowling Night Stuff, Movie Hangout Stuff, Backyard Stuff and Luxury Party Stuff.
Steps: How can we find the bug ourselves? Build an apartment/house with an entresol/mezzanine. (or a room with glass roof)
What happens when the bug occurs? While on the entresol/mezzanine the furniture from the floor below doesn't show, it's just bare floor. Stuff on walls shows fine. I'm attaching a print screen where there are mirrors on the wall and you can see the furniture in the mirror but not on the floor. It's the same when I have a glass roof. When I'm on the floor I can't see anything through the sunroof but bare floor. At some angles the furniture would flicker but mostly it's just not there.
What do you expect to see? All furniture
Have you installed any customization with the game, e.g. Custom Content or Mods? Not now. I've removed them.
Did this issue appear after a specific patch or change you made to your system? Yes
Please describe the patch or change you made. This started happening after the terrain update a few days ago. I noticed it before I installed Get Famous so it's definitely to do with that update and not the new pack. Before that everything worked fine and I had no issues at all.

Re: Problem with rendering furniture in multilevel apartments after terrain upda

Yep, I've seen this too and only in multi-level apartments that are open to the second floor. I forget which apartment it is now, but one of the default Maxis apartments in San Myshuno has this problem. So it's not caused by editing the lot in any way. All you have to do is load into the apartment and go up a floor to see it.

Re: Problem with rendering furniture in multilevel apartments after terrain upda

I can not tell you how annoying this is. Wish this would be fixed soon

Objects on lower levels disappearing when on upper level

I recently bought the get famous dlc, as well as the dine out and fitness dlcs

I've tried disabling all mods, going through the settings, changing graphics settings, switching to windowed mode, etc. nothing seems to be working.

This never used to happen and it's extremely annoying, almost game-breaking for me as I like to build mulit-levelled houses with lots of open space. Anyone have a fix or at least experiencing the same issue?

Re: Objects on lower levels disappearing when on upper level

This sounds really weird, could you maybe share some screenshots of what you're seeing?

Do you have this on all houses or just one?