@savedasims Could you try for testing purposes if it works without the baby and a different name ? You should be able to move out the baby via household manager.

Moving the baby out worked. Thank you!

Riddle me this EA why the 'eck is Hughs disallowed, cuz it has 'hug' in it?!

I have a family of four girls with the last name "Pink" where the game tells me, every time I edit their outfits, that their name or description contains a word that prevents them from being uploaded to the exchange - and to this day I have no idea what word that is. The really weird part of this is that these girls are slightly modified from originals created by Isleroux (and I'm pretty sure the originals are still on the exchange) so I have no intention of ever uploading them, but I have not changed their names and the description I put in does not contain anything that should be considered remotely offensive (unless "vampire" is considered offensive).

I tried to upload a lot named Imperial Gardens, but for some reason the word ‘Imperial’ was problematic?

I just made a family, and the sims are named Bob, Candy, Creek, Leek, Syrup, and Yoyo (the last two are dogs) and their family name is Williamson. It says one of them has a banned word as a name... And I can't for the life of me figure out... What word it could possibly be...? Bob is a common name, Candy is a common name AND there are sims in-game with that name, Creek is literally another word for a stream (which is a body of water...!), and a leek is literally an onion... Whereas syrup is what you put on pancakes and a yoyo is a little bauble on a string that goes up and down when you flick your wrist... And Williamson is a very common surname...? None of these words are bad? I don't think any of them should be banned. I planned on sharing this household with someone, thankfully by zipping up the save files and emailing them, but, I think they need to review the list for these names, because none of them should be banned, or if they do think they should be, I'd like a legitimate reason *why* they should be banned, as none of them are bad. It's not like I named the husband *, which, by the way, is a nickname for *Richard* and also is not bad. (See: * Van *, an American comedian from the 60's. That is his legal name.) 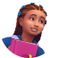 I know why because I looked it up, but when a Let's Player tried to name her white cat Spook, reasonable, right? It's a spooky little ghost kitty cat. I won't say the meaning, but let's just say the race in question has a much better known "insulting" name that they use to greet each other with so why this incredibly obscure reference would even be on their radar shocked me. She, meanwhile, had no idea which of her cats even had an offensive name. I did, and chuckled a little because EA is so hyper sensitive that it is teaching people obscure references to races in their attempts to keep things "kid friendly". I mean honestly. What's next? Banning cracker, a reference to Caucasian people, of which I am and think is a hilarious term. What about vanilla and chocolate? Are they next to go? Ooooooh insulting! *laughs* Although now I think I'm making myself hungry and amused instead of insulted, which is how it should be.

I swear they are so strict they end up teaching you obscure swears, acts, and references because once you figure out what is blocked out you want to know why. So we are being taught naughty things we wouldn't DREAM were naughty until we are blocked from using it. Also, yes I know how it is pronounced but I seriously feel bad for the person whose last name is Cox. It's a real surname, people. Let them have their surname. I can already imagine their pain going through school as it is, but it's like EA wants to make them feel humiliated and picked on too and that just isn't okay with me either.

The name Analise does not work, why?

Product: The Sims 4
Platform:PC
Which language are you playing the game in? English
How often does the bug occur? Rarely (0% - 9%)
What is your current game version number? 1.58.69.1010
What expansions, game packs, and stuff packs do you have installed? Cats & Dogs, Seasons, and holiday
Steps: How can we find the bug ourselves? Go to female name ad type in Analise
What happens when the bug occurs? It tells me the name is not allowed
What do you expect to see? I want it to be allowed or at least tell me why the name is blocked
Have you installed any customization with the game, e.g. Custom Content or Mods? Not now. I've removed them.
Did this issue appear after a specific patch or change you made to your system? Neutral/Not Sure

@RandoDepressioI think it has to do with the first 4 letters of the name...

I suggest to make it work yet still keep some semblance of the name is to just spell it as Annalise instead of Analise.