Product: The Sims 4
Platform:PC
Which language are you playing the game in? English
How often does the bug occur? Every time (100%)
What is your current game version number? n/a
What expansions, game packs, and stuff packs do you have installed? All expansions, All game packs except, parenthood, 7 stuff packs.
Steps: How can we find the bug ourselves? Start a new game, Forgotten Hollow would be quickest and wait for the welcome wagon. Other part of bug, look in household of any un played vampire with Vampire run ,Mist etc. Any of the pre made's would work.
What happens when the bug occurs? Since installing last patch, the un played vampires have no energy, they are constantly slouched over and complain of no energy. Other part of bug is no un played vampires have any talents enabled, The Vatores can no longer fast run, Vlad has no mist etc.
What do you expect to see? I expect the game to take care of un played vampires needs.
Have you installed any customization with the game, e.g. Custom Content or Mods? Not now. I've removed them.
Did this issue appear after a specific patch or change you made to your system? Yes
Please describe the patch or change you made. After updating to the recent emergency patch. I started with a clean folder, have returned nothing and repaired 4 times.

I know there is a vampire bug with talents on played sims but this one only affects non played sims. So started a new topic, although they may be connected.

I have started 4 new games since the patch and every game has the same problems, with un played vampires. It seems as soon as they leave there lot, there energy is drained and never refilled. This effects out of town vampires as well, they are very easy to spot now due to the slouching.

After becoming aware that there talents where no longer enabled, I went into the pre made's houses and enabled there Vampire run and Mist. I then marked them as un played again. The game is now taking care of there needs, they are no longer complaining of lack of energy.

I had an out of town vampire walk the length of my sims neighbourhood, while on fire, since they can only move slowly due to lack of energy. I moved them into a house to take a look but this vampire had only low level points, nothing for me to enable so I had to delete him.

I'm being told this was intentionally done. If we enable Spirit Powers for NPC Vampires, they'll burn energy and will be more likely to die in the sun. I'm seeing some reports in this thread that NPC Vampires are still dying too often, regardless of the change to Spirit Power usage, but we're tracking that in a separate bug report, here:

I can confirm, I have notice alot of vampire have no power, Vatore family don't vampire run like they use too. Straud doesn't do hes mist..

I have now completely uninstalled the game and reinstalled with just the base game and vampires.

This seems to have fixed the energy issue, however the premades talents still need to be manually enabled.

Do you still see this after completely resetting your user folder and playing on a unmodded game ? Did your save ever have mods in ?

I was wrong, energy bug is back. So both bugs are still in my game.

Took a screenshot, to show what i mean.

@crinrict I've been testing on a clean untouched Sim 4 folder. and notice I think because either a patch or Cats & Dogs reset the vampires like Vatore's from using their Vampiric Run. I saw Lilith Vatore walking normal again. I went to her house and checked. her Vampiric Run was disable. Straud Mist also was disable. once I enable Vatores vampire run and Straud mist, they acting like they suppose too . also I don't see any power drain atm. 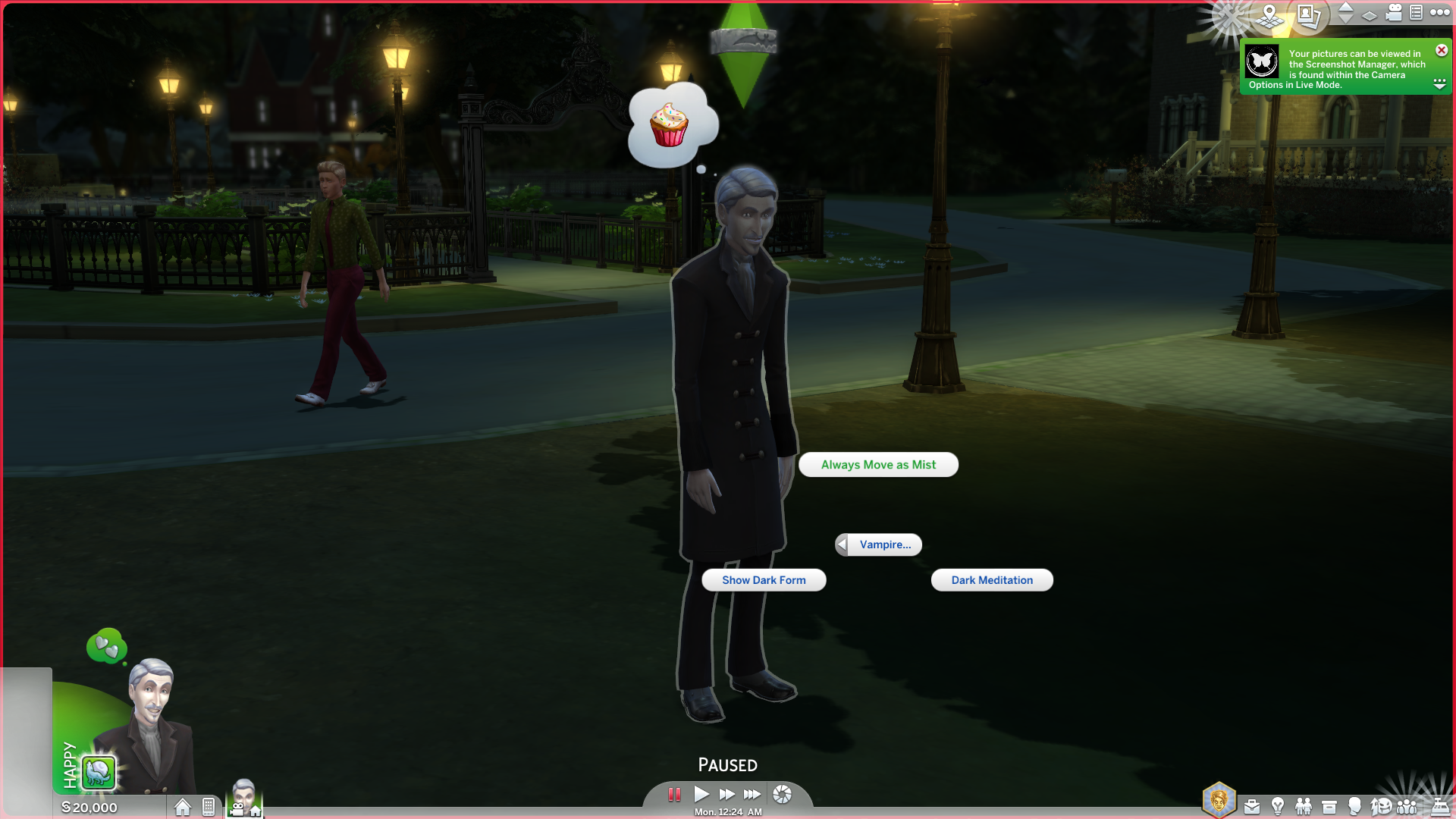 here a pic for Lilith Vatore 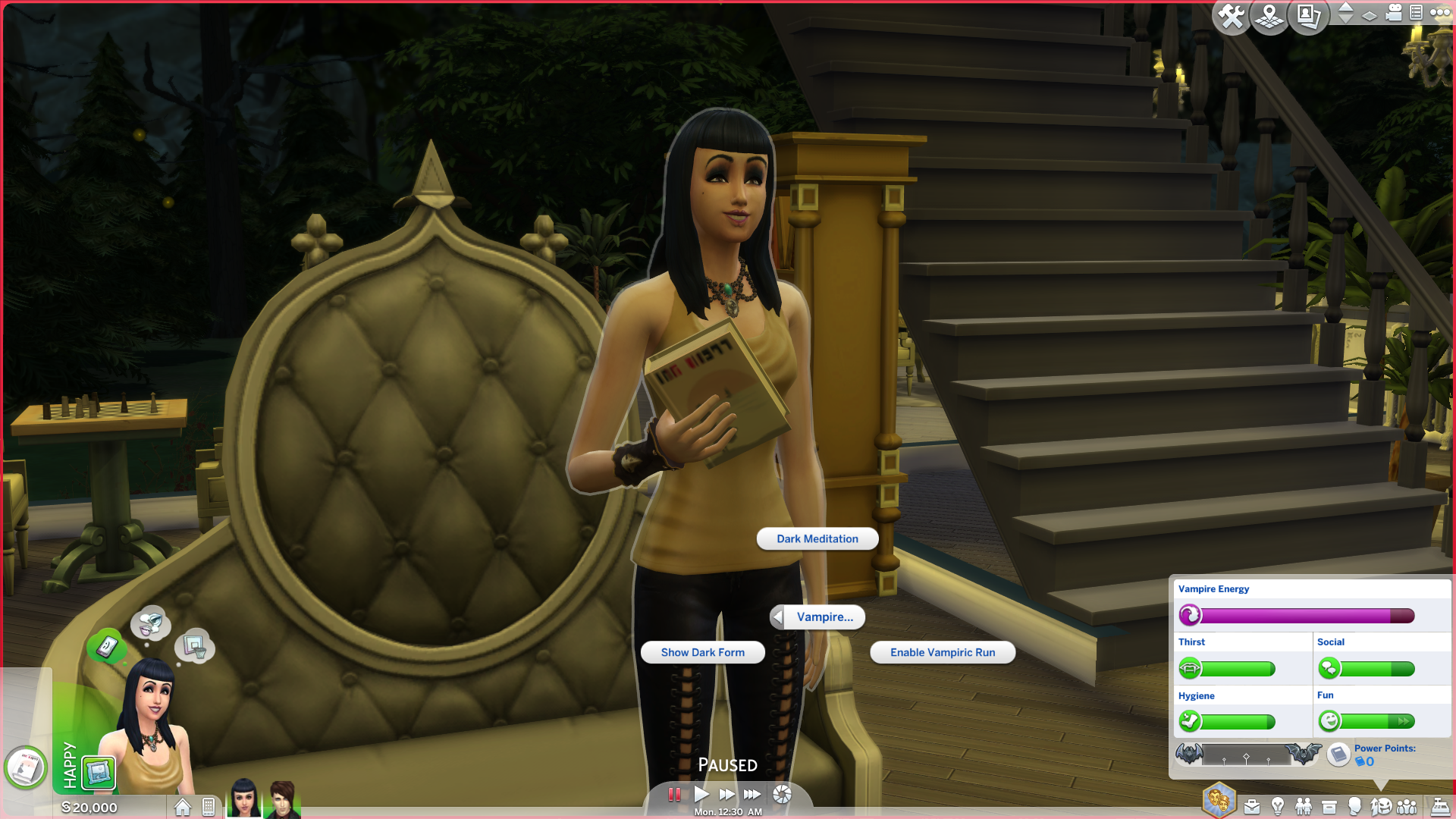 as for the other NPC/ Walk By, unsure why game not refilling theirs

so you do still see power drain ?

@crinrict no power drain. they seem to be back to normal. but 1 thing I still noticed. if they are "walk by's" they don't autonomy use their vampiric powers . like Lilith Vatore wont vampiric run if she a walk by. if you enter her house then she will autonomy use vampiric run. if that make any sense ?