(Any Pack) Autonomy becomes more out of control by the month

(Any Pack) Autonomy becomes more out of control by the month

Product: The Sims 4
Platform:PC
Which language are you playing the game in? English
How often does the bug occur? Often (50% - 99%)
What is your current game version number? 1.72.28.1030
What expansions, game packs, and stuff packs do you have installed? All EPs, all but Batuu GP, all but First Pet, Toddler, Backyard & Kids Room SP, Dust Kit
Steps: How can we find the bug ourselves? Just play the game. At all.
What happens when the bug occurs? Sims have the attention span of a squirrel hopped up on speed. They never finish doing anything. They always start some new random thing, interrupting anything else they were doing without fail - whether it was an autonomous or player assigned task.
What do you expect to see? I expect a Sim to do what I tell it to. I expect a Sim to start a task and not abandon it 2.41 seconds later, and repeat this ad nauseum until I regret ever having installed the game.
Have you installed any customization with the game, e.g. Custom Content or Mods? Not now. I've removed them.
Did this issue appear after a specific patch or change you made to your system? Yes
Please describe the patch or change you made. I don't know which patch, but it began in the recent months and gets worse every month. Now it's to the point where the game sometimes feels unplayable - but the worst was the introduction of kits, specifically the Dust kit.

Not much else to say that isn't said above. For months now, autonomy has been beyond out of control. There are so few tasks that a Sim will actually keep doing until they complete it I could count them on one hand. 9 in every 10 tasks gets interrupted by autonomy just screaming GO VACUUM THE ICE CREAM MACHINE. And that's just the dust kit. Speaking of the dust kit, don't even get me started on how often a Sim will be doing something that costs money, such as a bath soak (bath soaks take a lot longer now since the last base game update that sped up bathing, that makes a lot of sense huh?), and interrupt it halfway to go vacuum a clean floor. Even discounting kit actions, they'll still bounce between things endlessly. Oh, I'll look at the comically oversized microscope-- nevermind, did that for 3 seconds, time to watch TV. Oh that 5 seconds of a movie was great, time to play a violin-- forget this violin, I'm gonna play chess. CHESS TIME IS OVER. I'll do some boxing-- EASEL. ART. You get the idea.

Sometimes this somehow even breaks through the "Disable autonomy on selected Sim" option. It doesn't happen as often, but it's more than enough to be very noticeable. All this happens with mods on or off. 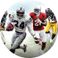 @Saihyou"Sims have the attention span of a squirrel hopped up on speed."

I've never had any mods or CC, and my Sims do seem to prioritize player-assigned tasks over the ones they get autonomously, but, yeah, in an eight Sim household, it is a bit like herding kittens... or juvenile "squirrels hopped up on speed."

Thank you so much for that description of it.

Edited to add: For some reason, whenever a new pack is added, the pack action is tuned to happen way too often. I recall people complaining about knitting being an obsession when that pack first came out. The Bust the Dust kit is probably the same thing all over again. So glad I didn't buy that, and I really don't want cutesy/creepy dust bunnies or sparkles on my floors.

@stjmkThe priority of player assigned tasks used to be higher, but as time goes on the past months it just gets worse and worse. And yeah, the whole dust kit... it's even worse with children. When the floor sparkles, they're often inspired, and for some reason being inspired makes them exponentially more prone to "making a mess" because it's their "art"? I mean... we have like 300 recolors of the children's drawing table, but no, inspiration only makes them misbehave I guess?

He's actually entirely ignored the drawing table since the kit! I've seen one make a mess, stop to do something else for 4 seconds, make a mess... it just continues on until I intervene or they sleep! Parenting discipline does no good, but I'm not surprised there. Oh yeah, he does use the doll house, but he uses it to force "Play dolls with" interactions on other Sims all the time, even more robbery of control and interruptions of tasks! I have a feeling some of this wasn't very well thought out... just a hunch.

So, when you tell the kids to do their homework or work on school projects, do they still complete them now? Usually, by the time my Sim kids do their homework/extra credit/projects, eat something, go to the bathroom, have a bubble bath, sleep and make friends with the monster under the bed, they don't have much time for anything else. Which is kinda sad.

And the "Play dolls with" interaction now forces other Sims to drop what they are doing to participate? I remember it was broken, as in not being an option, and then supposedly got fixed. This is a fix?

I never understood the make a mess thing. They've got lots of toys (well, they don't have a working model train set, or pool slides, or just slides in general) and there isn't enough time for them to play with their small selection of toys as it is, and Sim 4 kids think it is more fun to make a mess. Just why?

As I said, I don't have the last two patches/updates or any kits, and, if they make the autonomy/routing even worse than it is already, I really don't want them.
Message 4 of 15 (623 Views)
Reply
3

I’ve noticed it particularly with cooking. I’ll instruct a sim to cook and they will get the ingredients out and will then stop cooking as soon as they get distracted. One sim put the ingredients on the coffee table and started to watch tv. Most of them start, but then wander away to talk to a plant or play on the computer (which is on they have to climb the stairs to get too).

@Illandrya How incredibly annoying! Forget juvenile squirrels; Sims have the attention span of a gnat. A gnat hopped up on speed. It's beyond ridiculous.
Message 6 of 15 (506 Views)
Reply
2

Yeah. I think the main issue is that autonomous actions are automatically cancelled if anything else gets in the queue. If my sim autonomously decides to use the toilet and I want them to take a shower afterwards, they will abandon the toilet idea even if they’ve already started going, and go straight for the shower. In past sims games, even autonomous actions would play out with something else in queue, and if we wanted to cancel it, we’d simply click on it to cancel it. I would like it to work that way again. If we try to give our sims any autonomy at all we have to wait till they’re done to queue anything else up, which makes it more tedious to play.

@babajayneDon't really mind them prioritizing player commands over autonomous actions in the queue.

I remember, in Sims 1, waiting for them to finish autonomously using the toilet (IF I didn't catch them beforehand to give them the command to use the toilet because otherwise it would take an inordinate amount of time for them to use it twice) before telling them to shower and then having to hover over them to cancel the thirty minute hand-washing ritual before it could begin. Especially when they had to go to work or school in less than an hour.

Edited again to add: Please EA, give the devs enough time to fix all the annoying bugs, and make sure future content won't break anything else 'cuz we ain't buying it anymore.

@babajayne I personally don't mind player commands breaking an autonomous action. It can be annoying to plan, and sometimes they will finish it while other times they won't. In previous Sims games (or at least Sims 3), cancellations were responsive. In Sims 4, I can click to cancel something and one of three things happens:

1) It cancels within a few seconds. This happens very, very rarely.
2) It takes longer than 10 seconds to cancel but eventually does. This happens sometimes.
3) The most common occurrence: It takes so long to cancel, they go through with the task or finish it before it even considers cancelling. Often, it'll instead cancel the cancellation. Welcome to the Sims 4, where having control is synonymous with taking candy from a baby.

I can at least somewhat plan around all this. The issue is, for a while now, and with increasing frequency, the autonomy breaks player issued commands too. I'll order a Sim to do something then switch to another, and within 5 seconds they have to go play BlicBlok for the ten thousandth time with a full fun need.

Even playing last night, I gave a Sim a task and didn't switch from them and it blatantly overrode the "Disable autonomy on selected sim" option being enabled. It didn't even take longer than a few seconds, nor was it any of the usual culprits. Ugh.
Message 9 of 15 (416 Views)
Reply
3

First, thanks so much for bringing this to our attention.

The team is investigating this issue but as the report remains overall relatively general, we are looking for save files and videos of the particular situations where you see this happening.

This will help our team to determine if those different situations are different problems or the same core issue.

Here's a link to the instructions on how to send save files and video files to our team.