I thought this might have been addressed in the 2/4/16 patch because when I placed my original test case, my Rock N Roll House, on the Affluista Mansion lot (where it was originally built), for the first time ever, all of the floor tiles were placed properly: 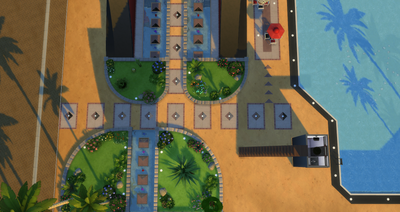 However, the excitement was short-lived because when I placed the home on other lots in the world, the floor tiles glitched out: 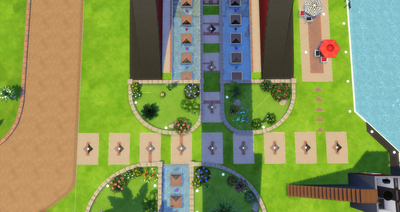 It seems like the devs may have done something to the Affluista Mansion lot that has improved the situation for my floor tiles there, but since it obviously doesn't carry over to other lots, I think that it was just a coincidence and floor tiles are still prone to having their orientation switched.

Our QA team is interested in knowing the following:

- Which lots this issue is occurring on in your game?

- Are you using CC or mods?

Also could you provide us with a save file showing the issue?

- I did not exhaustively test every lot in the game, but I did just run through several of them, and the orientations were incorrect on all of them.

Save file here.  If you look at the RnR House placed on Affluista Mansion, where I originally built it, you should see the floor tiles as they were meant to appear (note my screen shot in a prior post).  On all the other lots where I placed it (in some cases, partially placed it due to smaller lot sizes), you will see the orientations change.  I placed it on several different lots in Oasis Springs, the 50x50 lots in Willow Creek, the 64x64 lots in Windenburg, the 40x30 in Magnolia Springs, and the 50x40 in Newcrest.  After the fact (not shown in the save), I also tried the 50x50 in Granite Falls.  All had incorrect tile orientations.

Awesome, thank you so much @BryonyRae. I've passed your message and save file to the QA team. I'll come back to you if they need more info.

Thanks for helping with the investigation.

You're welcome.   Hope it helps.

I just heard back from them. Could your send me the whole save folder rather than just the individual file? You can upload it in Dropbox and send me a PM. Sorry for the confusion :/

In order to take advantage of the new reporting template on this forum, I am closing this issue and re-opening it here.